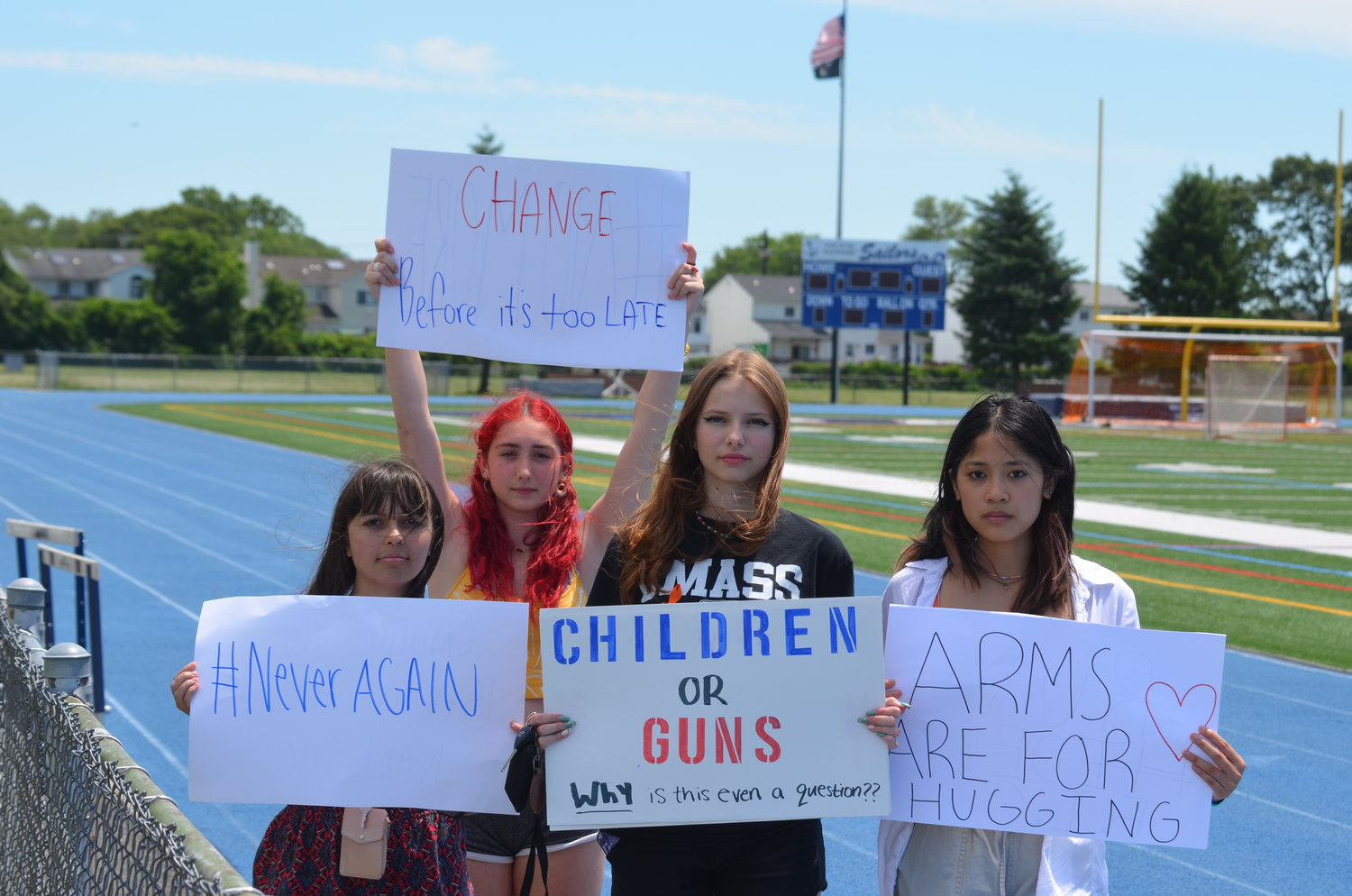 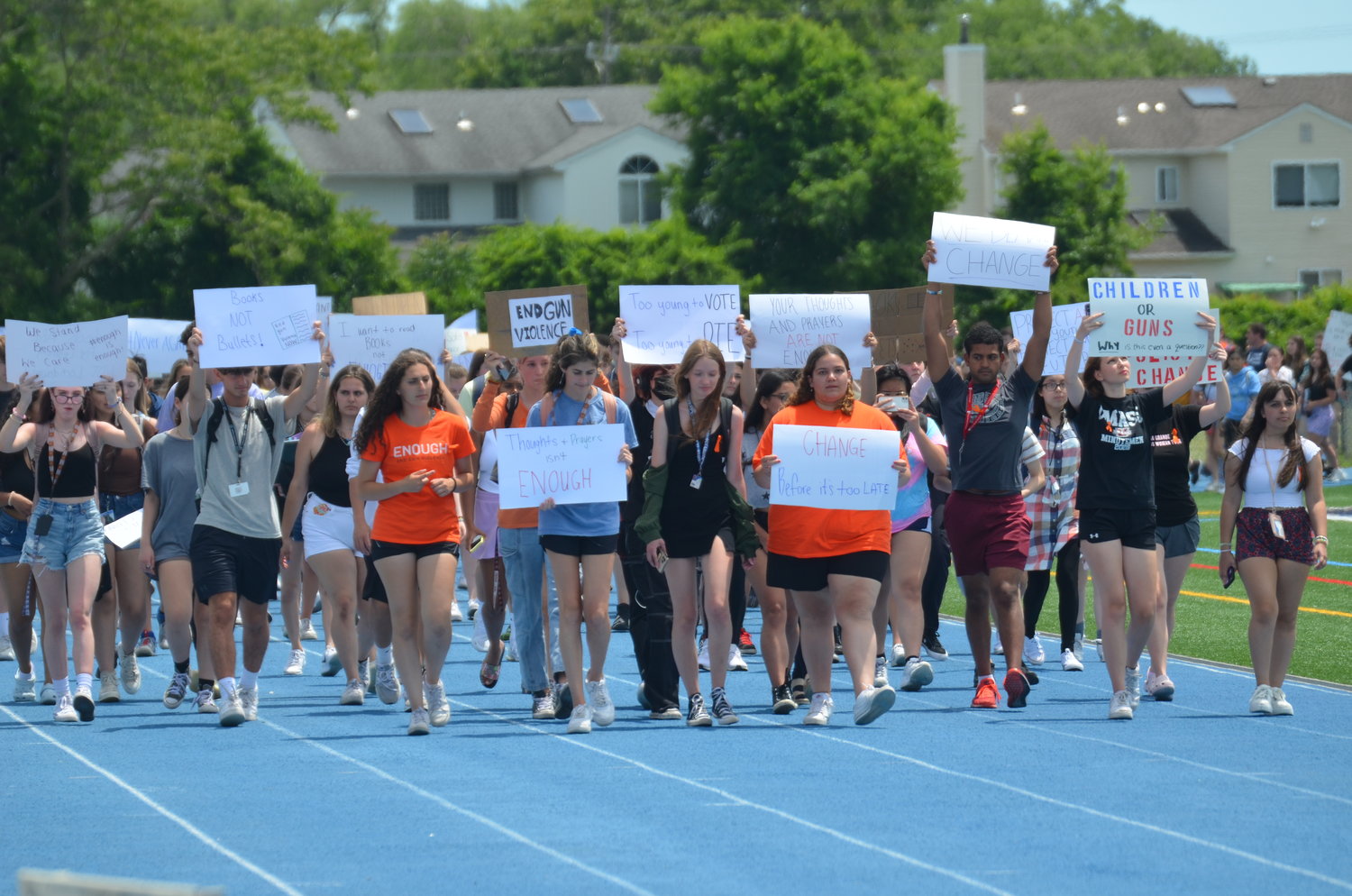 Some 200 OHS students took part in a silent march around the school’s track to protest inaction on gun control in the wake of the recent shooting in Uvalde, Texas.
Tim Baker/Herald
Previous Next
By Jake Pellegrino

Some 200 Oceanside High School students left their desks last Friday, walked out of their classrooms and made their way onto the football field before eventually taking part in a silent march around the track.

It was all part of a student-organized walkout to let the school administration and local government know that, in the wake of the shootings in Uvalde and Buffalo, no action on gun control is not an option this time.

“I saw a bunch of other schools across the country take action, and thought that it was important for us to do so as well,” Julianna Greenberg, a senior and one of the event organizers, said. “I thought we should show that we’re willing to be the change, and that we’re capable of doing that and bringing everybody together. This just shows that we deeply care about the issue, and we’re all working together to bring about change. Change is not only necessary, but possible. I want to mean it when we say never again.”

Senior Sophie Weissman, another organizer, said that a major motivation for organizing the event was the hope that schools can be made to feel like safes place once again.

“Whenever we hear that dreaded lockdown drill, we all think maybe this is the time we’ve all been practicing for, and there actually is a danger to our school,” Weissman said. “We should get the chance, when we go to a place of education and a place of growth, without worrying about our lives. Something my fifth-grade teacher once said to me really resonated with me. She said parents should never have to bury their children, and that’s been a primary motive for me. I think change is something that needs to happen before it’s too late. We need to be proactive in the situation.”

Senior Riley Seaver said that an unfortunate sign of the times is having to remap her brain in case tragedy strikes. “At work we have to take training courses, and one of them is about gun violence,” she said. “I shouldn’t have to walk into my job and look around to figure out where the best place to hide is, God forbid something happens. I have a plan for something like that, but I shouldn’t have to.”

The students said that steps that need to be taken include stronger background checks, better mental health services and making it more difficult to buy guns. “A lot of people say if you ban guns, people are just going to go on the black market and buy guns, but that whole argument is invalid,” Greenberg said. “If something is harder to obtain, less people are going to obtain it and less people will die.”

Some participants also said that the Second Amendment was outdated. “The right to bear arms was written about 17th-century weapons,” Weissman said. “This should not apply to 21st-century weapons. The power and deadliness of these weapons should not be allowed in anyone’s hands.”

“It was also written for a military,” Greenberg added of the amendment, “but now we have our own military and police forces to serve and protect us, so everyday citizens shouldn’t be able to carry weapons of war.”

“I think this is the least polarizing issue of them all,” Weissman said. “It’s just, kids are dying, let’s stop it.”

Support for the walkout coalesced quickly. “I’m the vice president of our Amnesty International club,” Greenberg said. “So, when I knew I wanted to organize a walkout, I thought the best place to go would be towards the club, because we’re all like-minded people who want to produce change, and I brought it to them and got their support, and had to meet with the principal a few times just to go over the details. With the help of my friends, I created fliers and spread it through social media last week, and we just starting telling everybody.”

Principal Brendon Mitchell called the demonstration “beautiful.” “To see their voices and activism is part of seeing them becoming adults, which is about speaking up when you see something that bothers you,” Mitchell said. “So the way they handled themselves today was beautiful, and speaks volumes about the types of students we have here at Oceanside High School. They saw something they needed changed. As a parent and principal, that’s an amazing thing.”

Mitchell was not legally allowed to endorse the event, however. “It’s a school day,” he said, “so, officially, kids have to be in class, but the spirit of a walkout is that they’re disrupting the normal course of events. So, in the interest of our role as a school, we weren’t able to endorse this. We just had to make sure if anything going on it was kept safe.”

Teachers were required to mark participating students as absent.

Mitchell insisted that despite the recent tragedies, the high school is secure. “We continually monitor and evaluate security procedures as required by the state,” he said. “We have hundreds of pages of building security plans, and we learn and grow from each of these tragic events, and learn what systems work best. All doors are locked at all times. We have security officers in the building.”