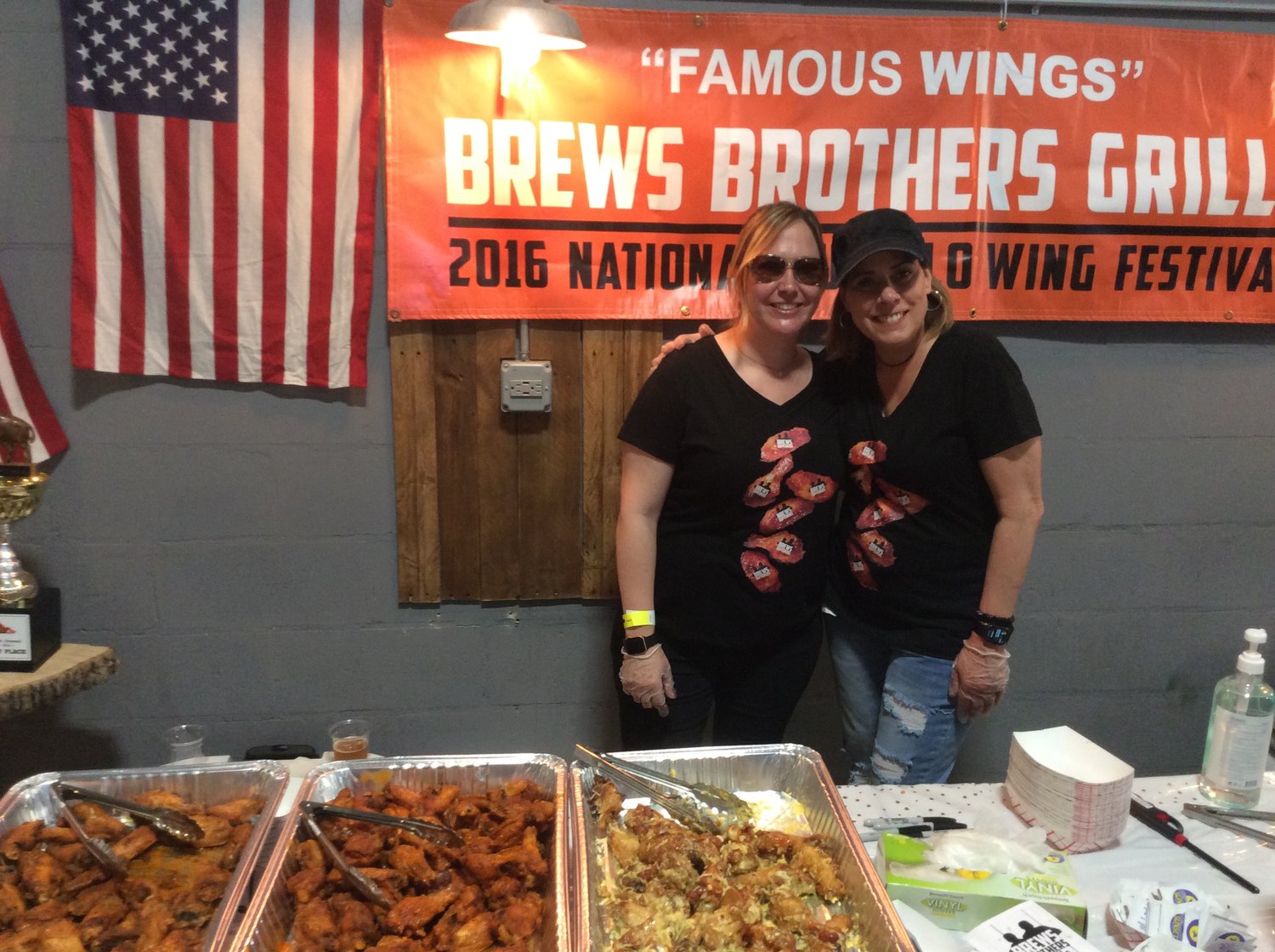 Restaurants and wing fans came from across the Island for the NY Best Wings Fest.
Kepherd Daniel/Herald 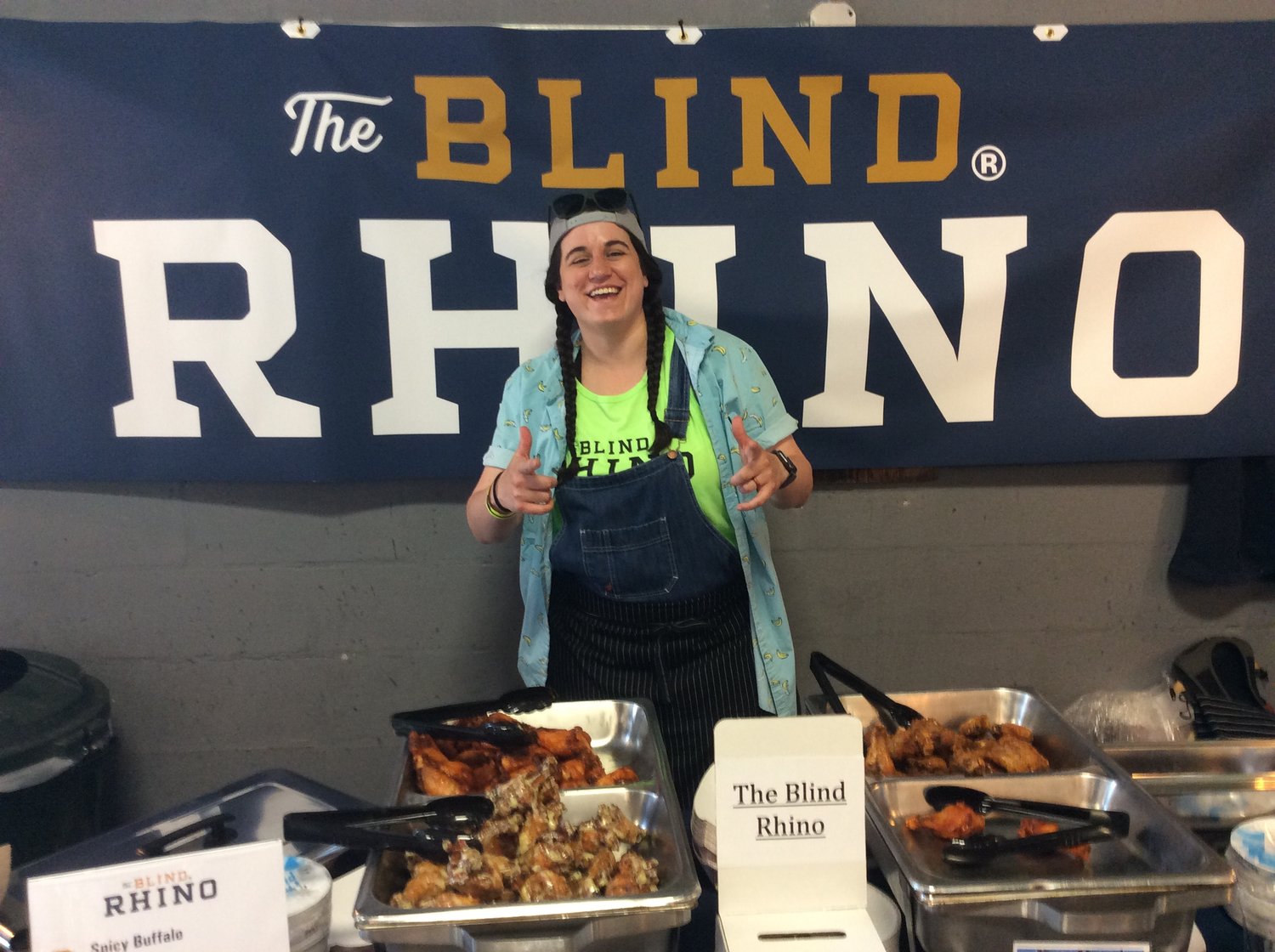 Blind Rhino came from Connecticut to enter its wings in the contest.
Kepherd Daniel/Herald
Previous Next
By Kepherd Daniel

Hundreds of fans of chicken wings flocked to Ocean-side, descending on the South Shore Craft Brewery, on May 21 to celebrate the return of the NY Best Wings Fest. The wing fest is home of the official best wings championship, and restaurants from all over the nation are invited to compete for top honors in wing competition.

The event welcomed hundreds to a taste test of some of the best wings from the tri-state area’s restaurants, which competed for the title of best wings. Lifelong Oceanside resident Matthew Kourie, of BestWingsLI, hosted the daylong chicken wing tour and encouraged residents to promote local businesses. Kourie said he is thankful to be able to host events such as these again after the pandemic had put a halt to everything for two years.

“I lost everything during the pandemic and the full experience went away, and now it’s about starting over and rebuilding,” said Kourie.

The restaurants were in fierce competition to win the contest for best wings as the celebrity panel of judges came out for the competition. Some of the judges included: head judge Adam Poch, who was featured in the 13th season of the CBS reality TV show “Big Brother”; Kristopher Plummer, better known as “Chef Plum,” who has served on the judging panel for many food events, including past New York Best Wing Festivals, the producer of the popular series “Restaurant Road Trip” on PBS Connecticut and has been featured on the Food Network; culinary executive producer Kristen Hartley; and celebrity personality and professional wrestler, Brimstone, whose real name is William M. Kucmierowski.

“The judges are a pretty tight-knit group of people,” said Poch. “We all know each other from different events, but we’re going to have a really tough time deliberating this year. I think everybody that came brought their A-game.”

Brimstone added, “I’ve done a tremendous amount of these events where I’ve judged and hosted here on Long Island and it is always a wonder how many incredible wing people there are. They do such incredible work on these wings and you think everything’s going to taste the same, but it’s always different, every single one, like a fingerprint.”

The Blind Rhino came away with the People’s Choice for Best Wings. In the judge’s vote for the best traditional wings, Swingbellys BBQ from Long Beach finished first while The Blind Rhino finished second and Brews Brother’s Grill in Franklin Square finished third.

“The Traditional judging was pretty clear,” said Poch. “Swingbellys just knocked it out of the park. Their sauce had just enough heat and flavor to complement the perfect cook on the wings. The Togarashi Brown Sugar impressed the judges with its unique sweet flavors on top of a crunchy wing. Several other flavors were in the running for 2nd & 3rd places — and came down to a series of tie-breaking votes. “This was for sure the hardest competition to judge as every wing served was delicious,” said Poch. “The real winners were all of the wing hunters that assembled to take part in this amazing day.” While the restaurants were offering their food in hopes of being voted top wing, those in attendance not only got to enjoy food and music but also a wing eating competition, a contest Poch chooses to stay away from after his experiences in prior events.

“I entered the wing eating competition at the end of the first wing tasting session,” he said. “In the second session, I couldn’t eat any more wings. It was much harder than I thought it would be.”

While wing lovers continued to debate what kind of chicken wing is better, drumsticks or flats, they were all able to enjoy a clear, sunny day of music, wings and fun.

“We were supposed to have rain all weekend and it’s a beautiful day outside,” Brimstone said. “Lots of people out and about, which we haven’t had in quite some time. And the food is incredible.”