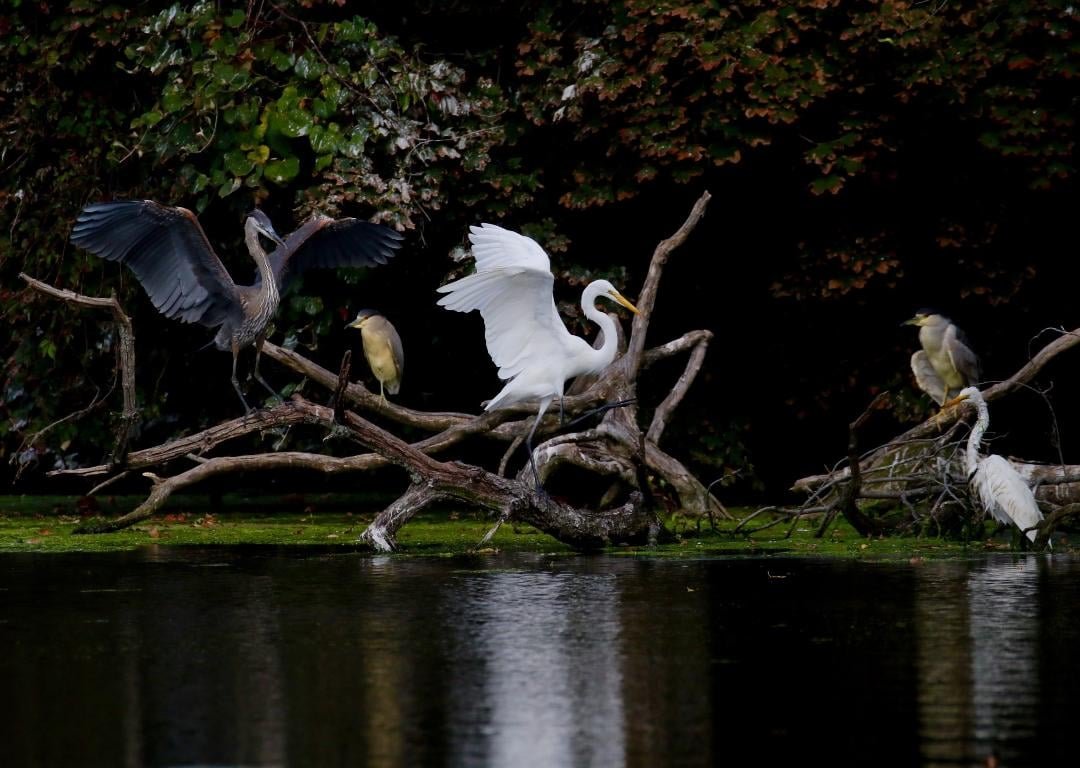 With Willow Pond cleared of duckweed, wildlife returned, including, in June, a great blue heron, a black-crowned night heron, a great white egret and a snowy egret.
Robert Kaplan/Facebook

After over a decade of trial and error, Hewlett Harbor has succeeded in keeping Willow Pond clear by targeting early-summer blooms of duckweed with herbicide treatment and dissolving most of the resulting dead matter with bacterial, muck-eating pellets.

We have a saying: The solution to pollution is dilution.”
Leonard Oppenheimer Deputy mayor, Hewlett Harbor
By Lisa Margaria

After over a decade of trial and error, Hewlett Harbor has succeeded in keeping Willow Pond clear by targeting early-summer blooms of duckweed with herbicide treatment and dissolving most of the resulting dead matter with bacterial, muck-eating pellets.

The 4½-acre Willow Pond, on Everit Avenue, has had many cosmetic and environmental problems. Since 2010, the pond has been rich in nutrients due to stormwater runoff but low in oxygen, resulting in dense growth of pesky plants like duckweed as well as algae, which caused fish in the pond to die.

In spring and summer, duckweed multiplies especially fast. “You can start with the size of a quarter and in a matter of two weeks it’s going to cover the entire pond,” said Hewlett Harbor Deputy Mayor Leonard Oppenheimer.

During the cold months, the duckweed dies and falls to the bottom of the pond, creating layers of mucky decaying matter. The muck adds more nitrogen, phosphorus and carbon to the water, which feeds harmful algae. Layers of the sediment build up, causing water displacement.

It’s natural for a pond to fill in over time, but the village has been proactive to keep that from happening. In the summer of 2011, the north end of Willow Pond, called Schenks Circle, was dredged — cleared of sediment and debris — which increased the depth of oxygenated water and the chance that aquatic life could survive. Pond aerators were also installed to break down pollutants and the nutrient load that caused the plant growth.

After Hurricane Sandy in 2012, sewage and stormwater runoff from Nassau County and Town of Hempstead drains made the pond overflow, which, as it receded, brought more foreign substances and nutrients to the pond, which led in turn to the growth of more unwanted, oxygen-robbing algae.

As the pond continued to fill with muck and was blanketed with duckweed, wildlife in and around it struggled. The village hired an environmental engineer, who formerly worked for the state Department of Environmental Conservation, to help with a pond management plan.
Dredging a pond is expensive and destructive.

“It’s quick and effective, but it’s a multimillion-dollar project,” Oppenheimer said. “We decided to go about it in a more natural, respectful way for the environment.”

In 2013, the village joined forces with Dru Associates — a waste management company— and the DEC to devise a variety of methods to reduce or eliminate duckweed and excess nutrients as part of an ever-changing pond management plan.

When there is more sediment than water, the water heats up faster, producing gases and nutrients that disrupt wildlife in and around the pond. “We have a saying,” Oppenheimer said. “The solution to pollution is dilution.”

An herbicide called Clipper SC was used for the first time in 2018. This, according to Oppenheimer, is an extreme measure, requiring permits and licensing from the DEC.

Because duckweed grows atop still water, the village began installing fountains and circulators in 2019. These, according to the December 2020 Management Plan, have made it easier to prevent the growth of duckweed and the accumulation of nutrients that cause algae, resulting in increasing pond oxygen levels and improving ecology below the surface. “We have movement — we have less muck,” Village Clerk Michael Ryder said.

The management plan will continue to evolve as it is assessed annually, village officials said.

According to Oppenheimer, keeping the pond clear of duckweed alone costs nearly $30,000 a year. Since 2018, the $6,000-per-treatment Clipper herbicide has been used at least four times, most recently in July 2020.

This, along with the fountains and circulators, has killed significant duckweed covering on the pond and eliminated the need for any herbicide treatments this summer, which saved about $12,000.

With less dead-duckweed muck on the bottom and the consistent application of muck pellets, the pond’s water quality should continue to improve. This summer’s rains created a better natural water-to-muck ratio, allowing in-pond oxygen flow and diluting foreign nutrients to prevent algae growth. “I’ll tell you, we had a great year,” Ryder said.

Hewlett Bay Park Village Trustee Antonio Olivero, who lives by Willow Pond, was involved in the maintenance process for a long time. Reflecting on all that has been done to clean it up, Olivero said simply, “We can enjoy the pond now.”