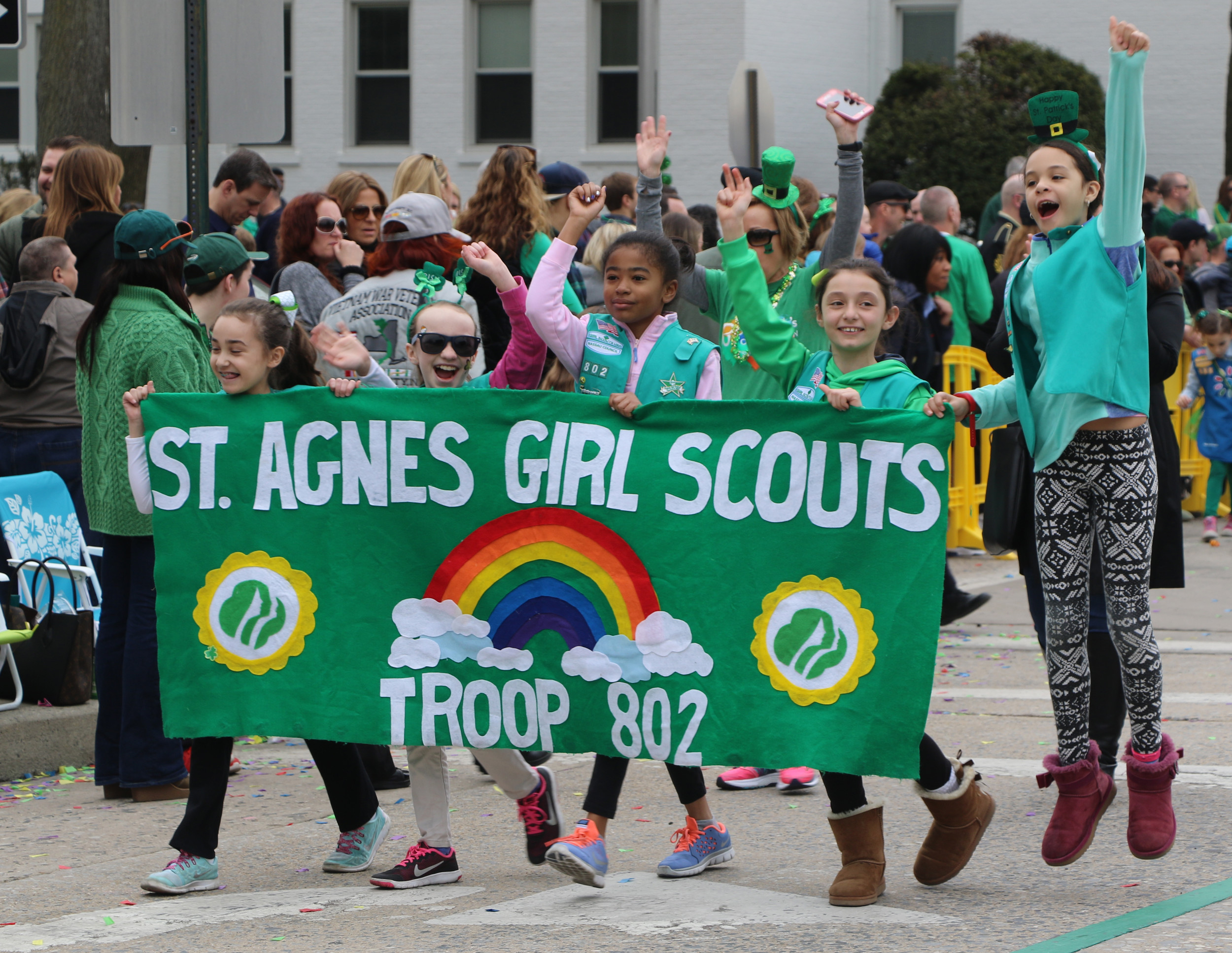 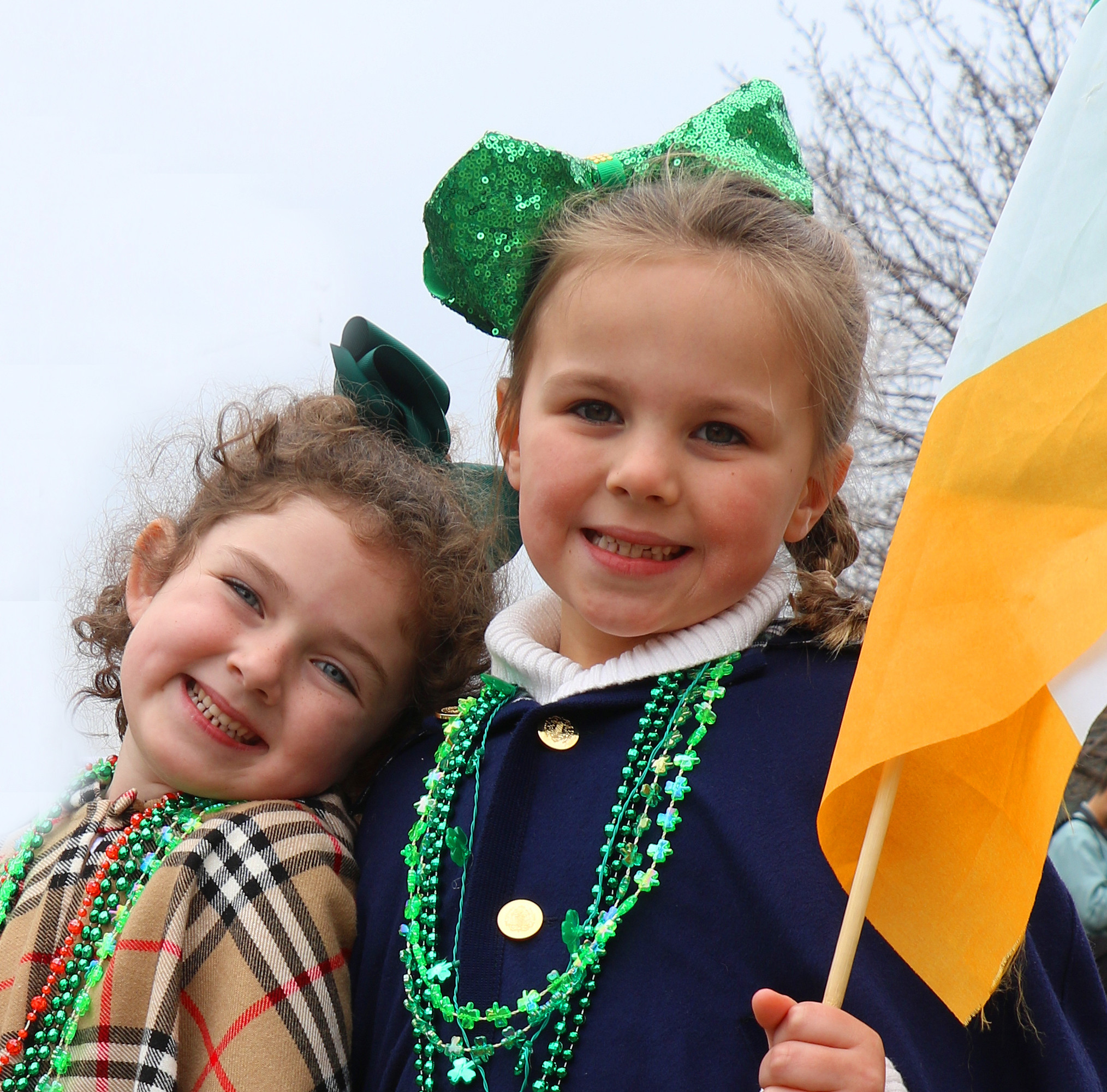 Cate Nelson, 5, left, and Niamh Grogan, 7, were among the tens of thousands who attended the parade.
Maureen Lennon/Herald 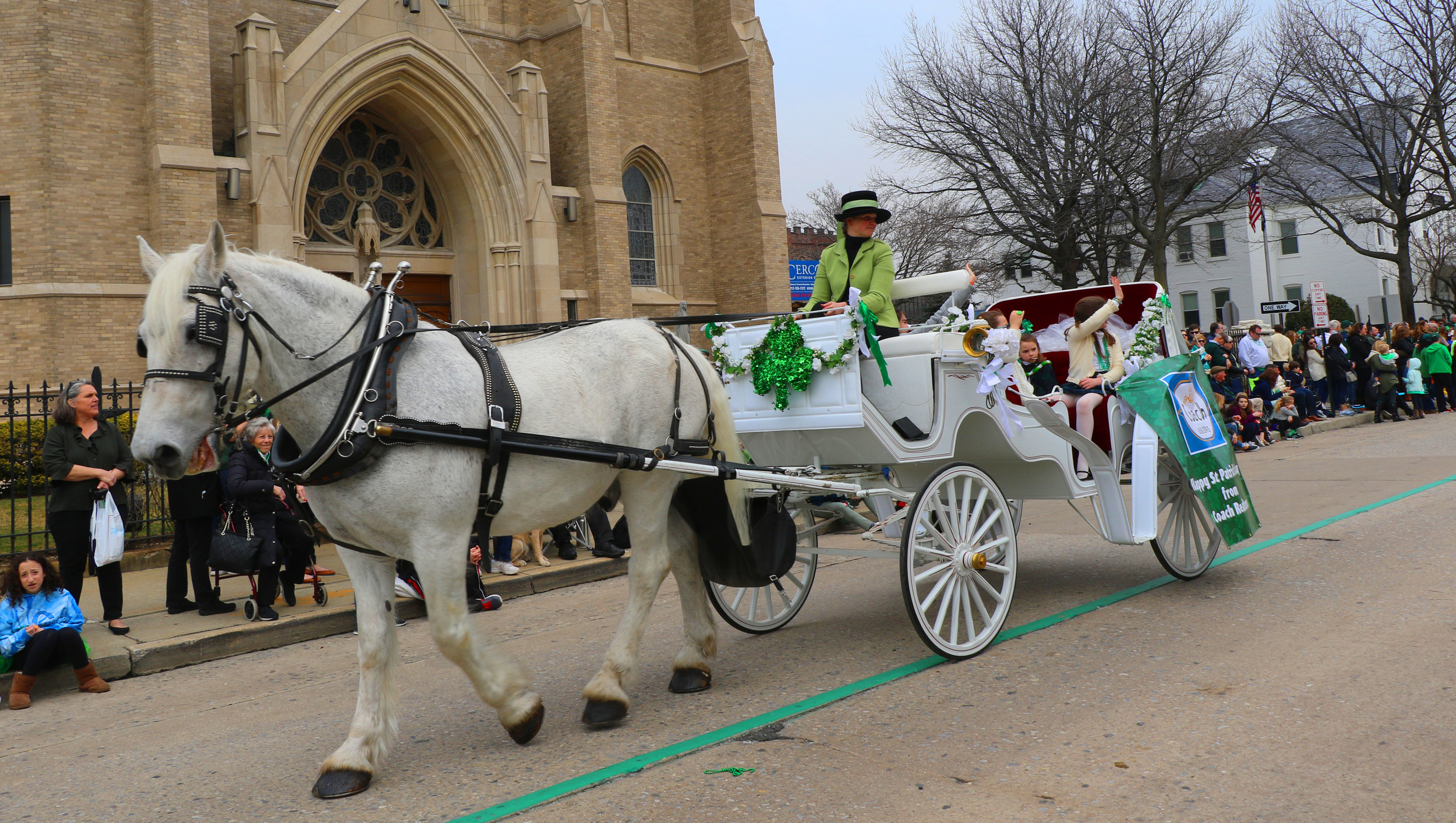 Coach Realtors marched with a horse and carriage on Saturday.
Maureen Lennon/Herald 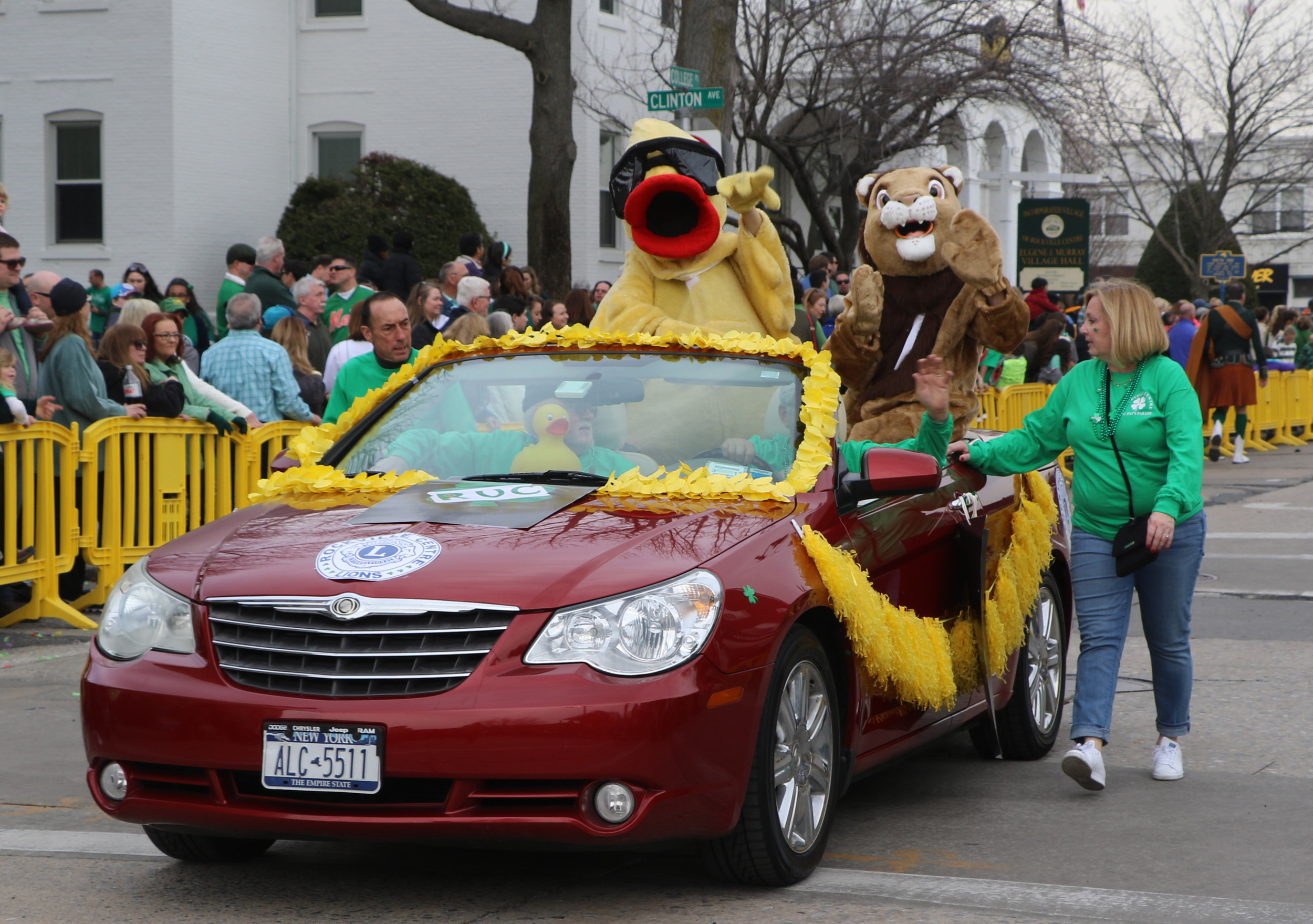 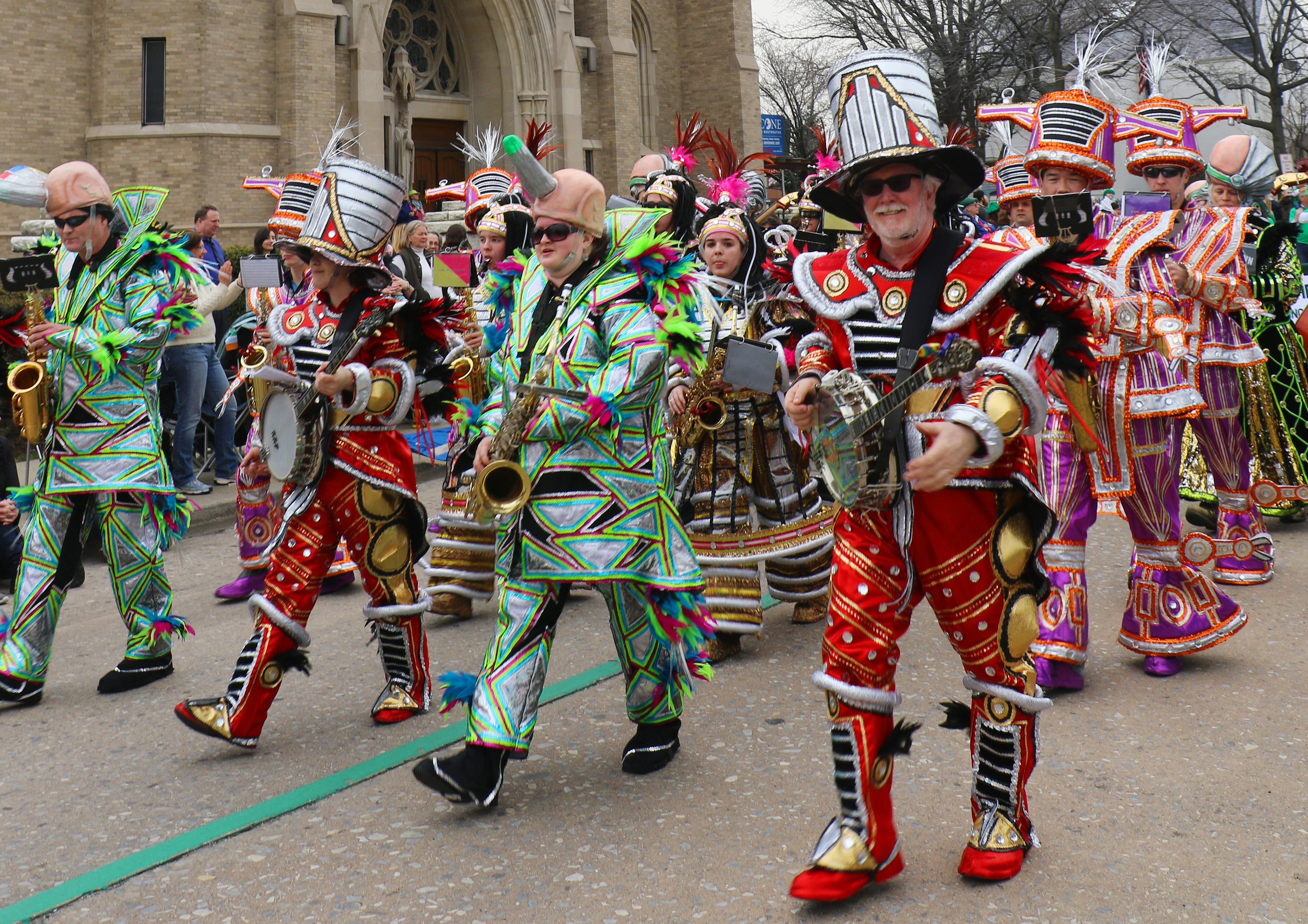 Out of this world: the Uptown String Band brought a bit of extraterrestrial color to the parade.
Maureen Lennon/Herald 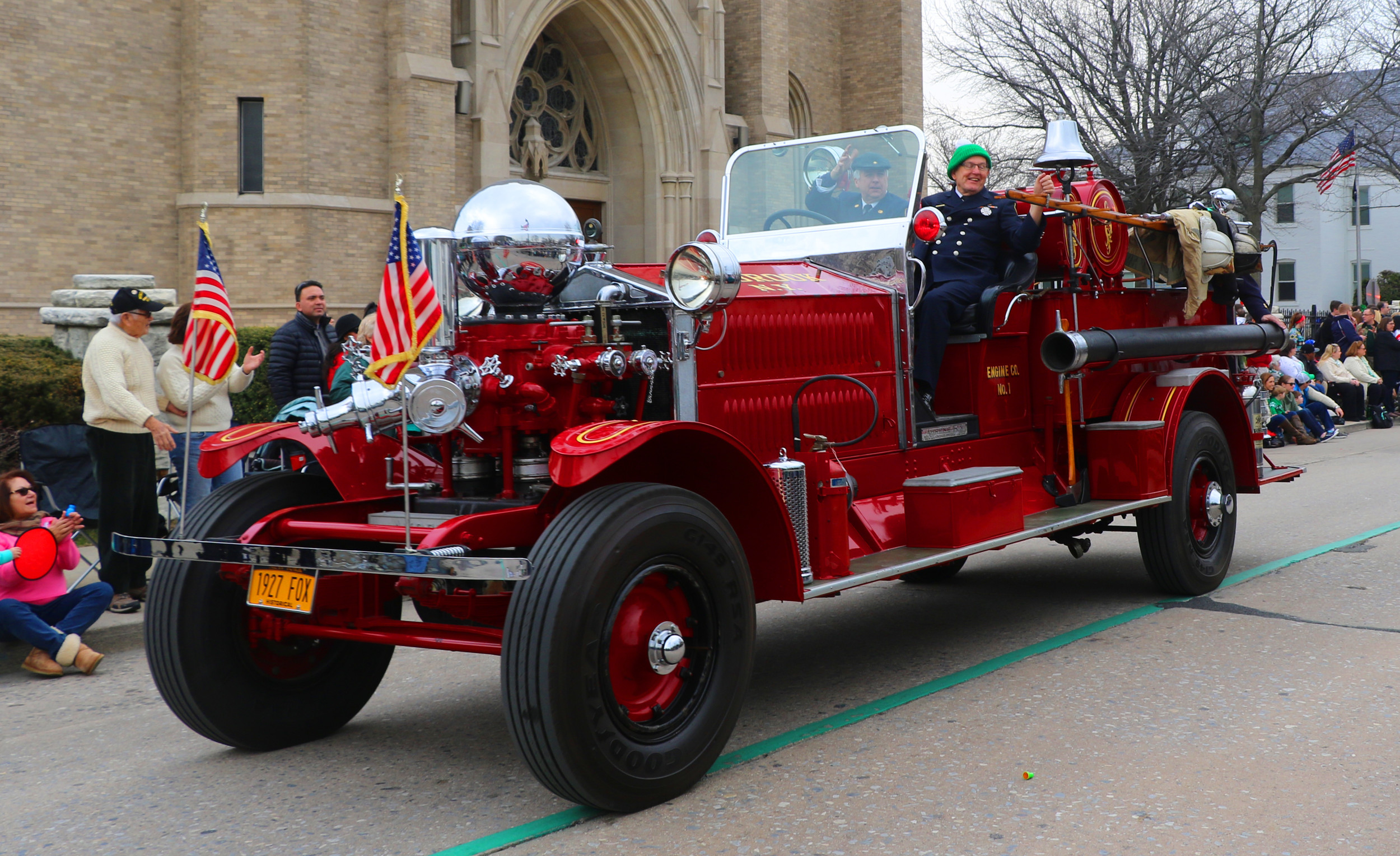 The Lynbrook fire department showed off one of its vintage 1927 Fox fire trucks.
Maureen Lennon/Herald 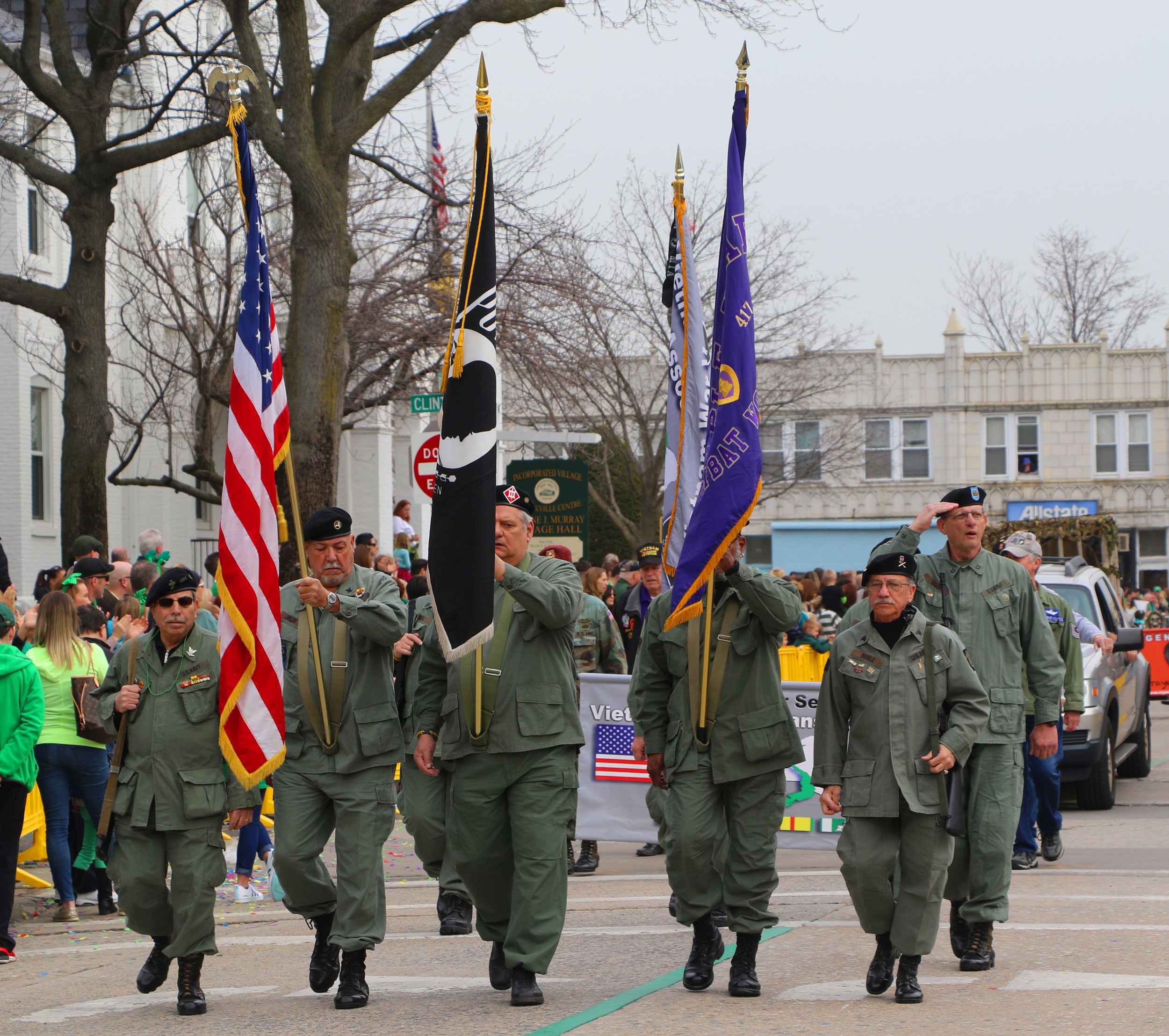 A contingency of Vietnam veterans and prisoners of war came out to participate.
Maureen Lennon/Herald

Various members of the American Legion ride together on their motorcycles.
Maureen Lennon/Herald
Previous Next

•16 pipe and drum bands put on a show

•3 marching bands came out to do what they do best

•Roughly 25,000 spectators joined in the festivities

Maple Avenue in Rockville Centre was awash on Saturday in a sea of knit wool sweaters and green outfits. The sun was shy but the weather was warm for the village’s 21st annual St. Patrick’s Parade.

Thousands of residents from the village and surrounding communities gathered to watch as dozens of service organizations, charities and local businesses marched — all led by this year’s grand marshal, Malverne Mayor Patti Ann McDonald.

McDonald’s husband, Steven, an NYPD detective and Malverne resident who became known nationwide for his message of forgiveness and peace after being shot in Central Park in 1986, died Jan. 10. Steven McDonald grew up in Rockville Centre.

Organized every year by the Rockville Centre St. Patrick’s Parade Committee, the parade raises money for a select number of charity organizations. This year the beneficiaries of the fundraising efforts were BackYard Players & Friends, a community enrichment program for children and young adults; Breathe Believe, a charity benefitting cystic fibrosis research; and Pieta House, a suicide and self-harm prevention non-profit organization.

“I felt very honored and privileged to be chosen as the 21st grand marshal,” said McDonald after the parade. “To see all the people out today and all the money going towards the charity, it says a lot about the people of Rockville Centre.”

“It’s a good day for everyone to celebrate St. Patty’s Day,” Rockville Centre police Detective Nicholas DeLuca said as he took a break from handing out small toys to passersby in front of police headquarters. He said he had been coming to the parade for about 10 years and has been on the department’s parade detail for six. “We like to give back and have a special parade for the community here,” he said quickly before running back into the street with a sleeve of green necklaces hung from his right arm to give out to children.

Irish blood was not required to enjoy the festivities. The parade “means getting to see all the community service people and celebrating, well, not our Irish heritage, but everyone else’s, apparently,” laughed Jennifer Rodriguez, who has attended the parade for six years.

Police and fire departments from neighboring communities, as well as members of the New York City Police Department, made up the bulk of the marchers, with departments from Malverne, Lynbrook, East Rockaway, Oceanside and Valley Stream showing off their uniforms and equipment, often adorned in green.

“It was a great turnout, as always,” State Assemblyman Brian Curran said after he finished marching. He commented on how the parade raises money for local charities. “I love participating in it every year,” he said. “Everyone’s Irish for a day.”

Members of the newly formed Rockville Centre Breast Cancer Coalition, a charity to help recently diagnosed cancer patients, marched to raise awareness for the group. “We’re here to help women in Rockville Centre,” said member Kathy Baxley. “We’re so proud to be a part of this.”

Not all marchers were human. Some people marched with their dogs, and members of a few select organizations rode on horseback. The parade started at Long Beach Road and Maple Avenue, and ended in front of St. Agnes Cathedral. It lasted from noon to 2 p.m.