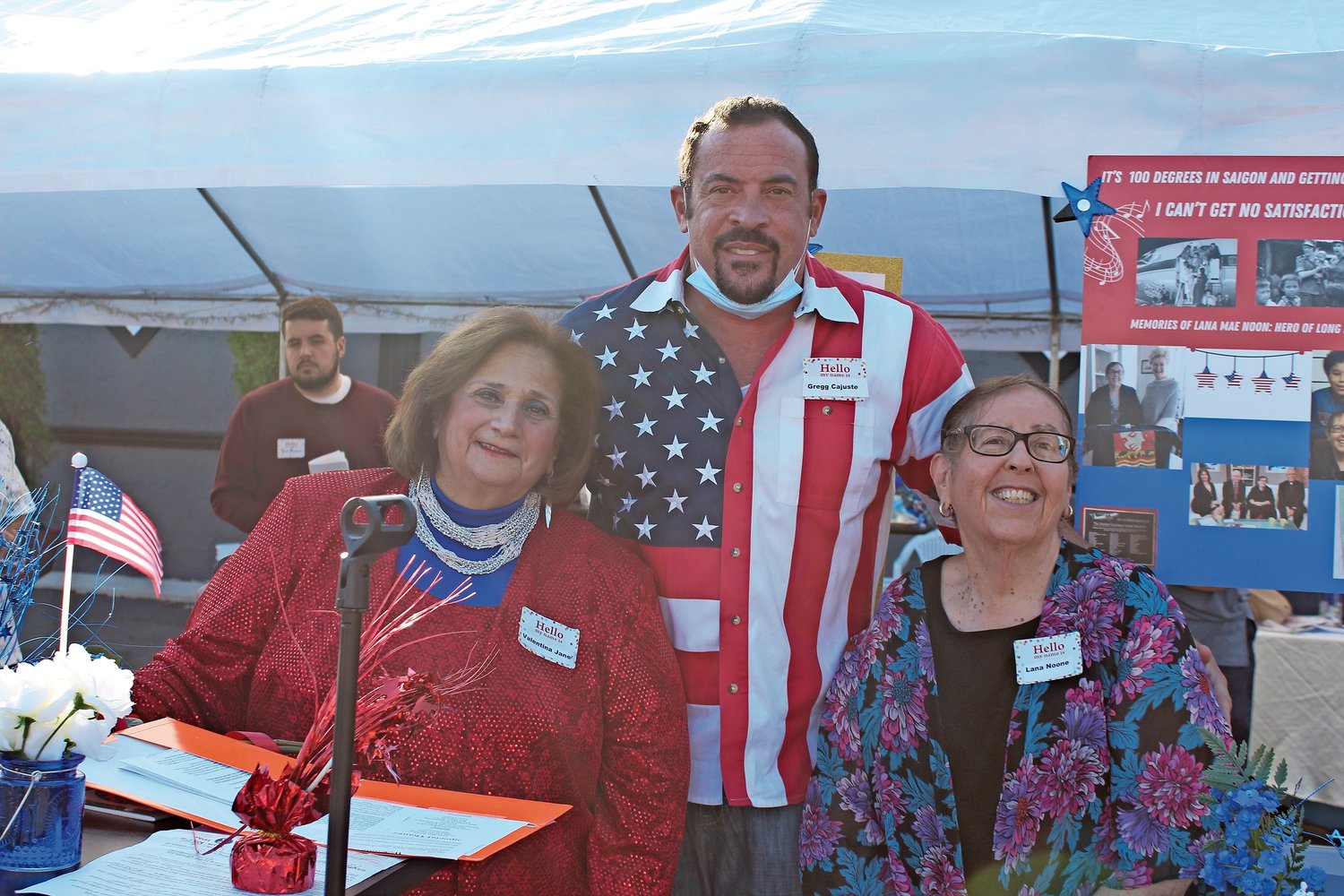 Valentina Janek and Gregg Cajuste hosted Lana Mae Noone at G’s Club in West Hempstead last Sunday for a live reading of “Children of the April Rain.”
Melissa Koenig/Herald 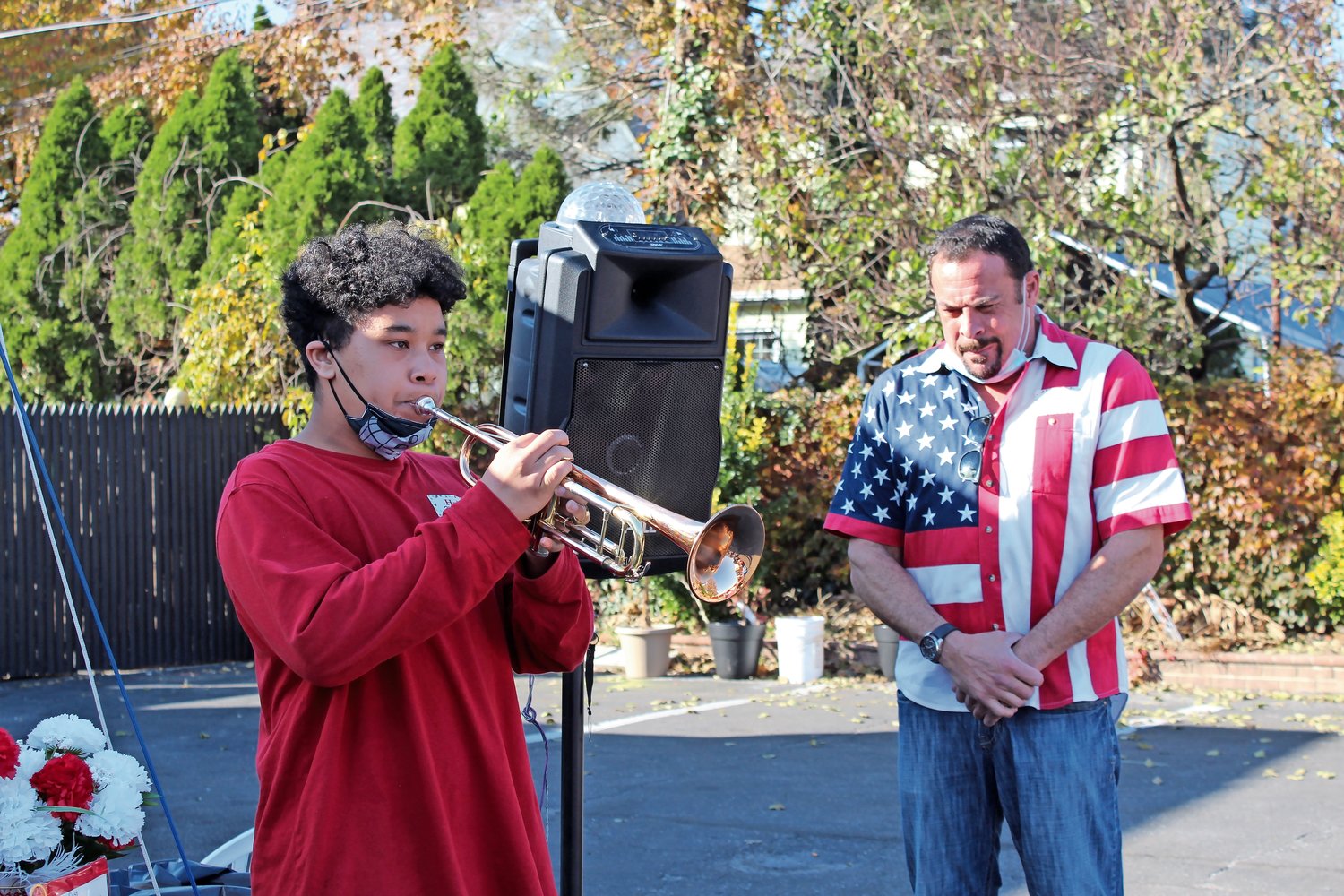 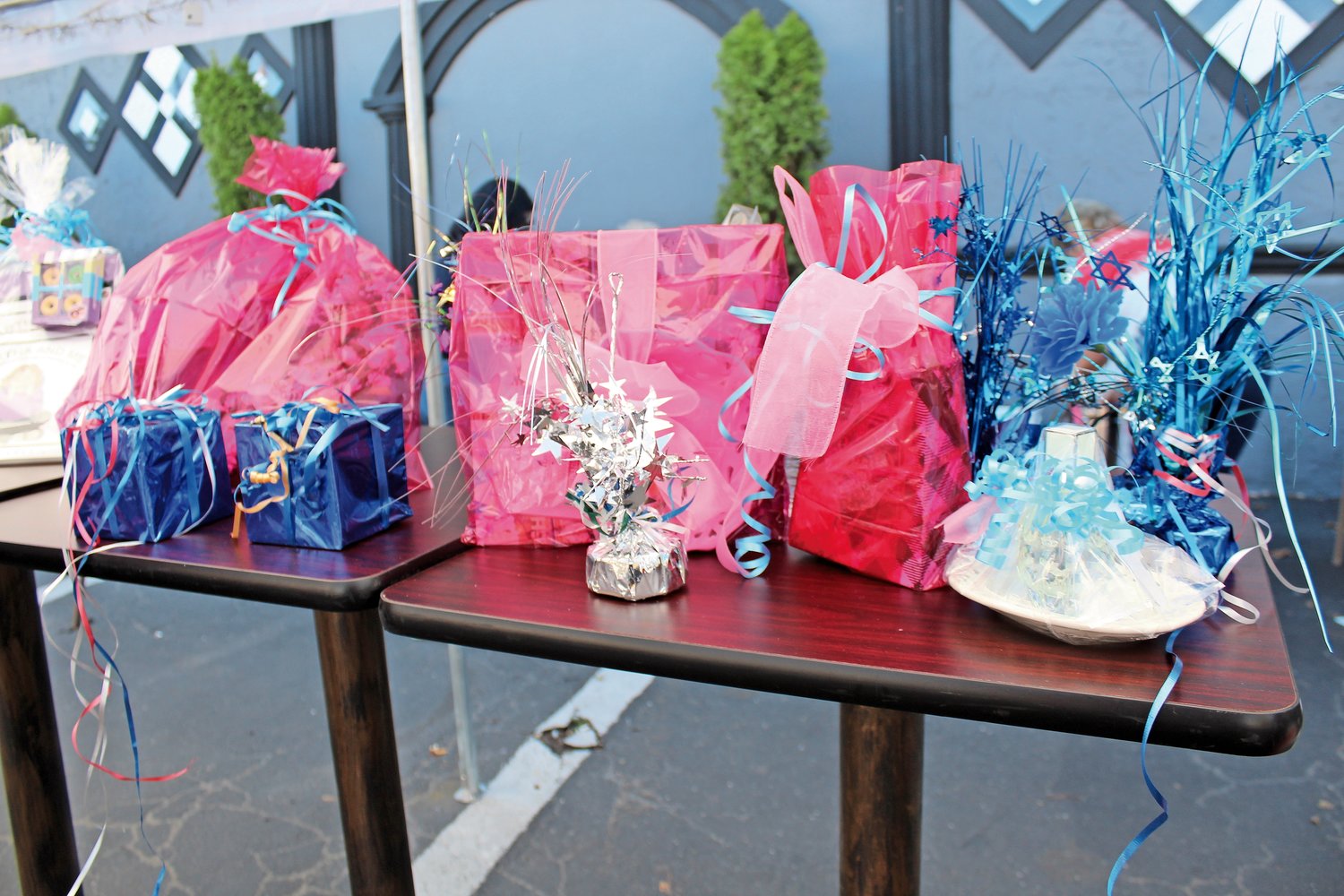 March 1975: More than 2,000 South Vietnamese refugees had been brought to Saigon.

April 4: The first official flight crashes in a rice paddy, killing 138 people on board.

April 17-28, 1975: Subsequent flights from Saigon were filled with babies, children and adults.

As the Vietnam War dragged on in the fall of 1974, Lana and Byron Noone were fighting a battle of their own at home in Garden City South, struggling to deal with two miscarriages and having given up on conceiving a child of their own.

Distraught, they couple talked to their pastor, the Rev. Dan Fritz, of the Christ First Presbyterian Church in Hempstead, and he suggested that they visit an adoption agency in New York City. There the Noones were told that they would have to wait two years for an American child, or they could adopt a Vietnamese child who had been orphaned by the war.

They chose the second option, figuring these children had nowhere else to go.

The story of their adoption efforts, part of a international rescue program dubbed Operation Babylift, became the subject of a book written by Lana Noone, now 73 and still living in Garden City South, and a play she co-wrote, after the Noones’ adopted daughter, Jennifer, graduated from H. Frank Carey High School in Franklin Square. The play, “Children of the April Rain,” was read by actors last Sunday at G’s Club in West Hempstead.

By 1975, the South Vietnamese city of Da Nang had fallen to North Vietnamese troops, and U.S. and South Vietnamese officials feared that Saigon — where Ed Daly, the chairman and principal owner of World Airways, had relocated more than 2,000 South Vietnamese refugees — would soon follow. Frustrated by a lack of response from the federal government, Daly decided to work with Friends of Children of Vietnam, an organization comprising American housewives who solicited money and supplies for Vietnamese orphanages, to have 53 orphans and 22 adult attendees airlifted to the Presidio in San Francisco on April 2, 1975.

The plane took off without headlights or clearance from the U.S. or South Vietnamese governments, but when the news reached Washington, President Gerald Ford announced that he had authorized an airlift of 2,000 Vietnamese orphans to the U.S., where adoptive families like the Noones waited anxiously for them. “This is the least we could do,” Ford said in a news conference on April 3, “and we will do much, much more.”

From April 20 to 28, nearly 40 planes left Saigon every 24 hours, according to the Gerald Ford Museum, and by the end of the month, the Defense Attaché Office in Saigon had processed more than 40,000 evacuees, including more than 3,000 orphans. It became the greatest humanitarian effort of the late 20th century, and even Monaco’s Princess Grace called adoption agencies to inquire about the children.

But on the first official flight of Operation Babylift, as it came to be known, the plane’s lower fuselage came apart shortly after takeoff on April 4. Its crew tried to make an emergency landing, but the plane hit a dike and broke into four parts, leaving 138 passengers dead, including 78 children and 35 Defense Attaché Office personnel.

The Noones’ baby, whom they named Heather before even meeting her, was scheduled to be on that flight, but when Lana called the adoption agency, she was informed that the plane was carrying children for a different agency. Heather instead arrived on a flight the following day, but had to be hospitalized and treated for pneumonia before the Noones could take her home.

Finally, on April 23, 1975, an escort handed the couple a baby with big eyes wrapped in a blanket, and the Noones knew instantly “she was our baby,” Lana recounts in “Children of the April Rain.” But when they unwrapped her, they saw how sick she really was. They took Heather to a local pediatrician, who told them that the emaciated child reminded him of a refugee from World War II. She had a worsening cough, continued to lose weight and soon had to be hospitalized again, this time at Long Island Jewish Hospital in New Hyde Park.

“I couldn’t imagine God letting Heather die,” recalled Lana, who was 28 at the time.

She and Byron — who died of brain cancer in 2002 — sang and danced around the hospital room to cheer their baby, and twice she actually smiled up at her adoptive parents. The doctors, however, wrote in Heather’s medical chart that Lana was in denial of the baby’s condition. In the end, Heather died of complications of birth defects related to exposure to Agent Orange — the defoliant dropped from the air by U.S. troops — and severe malnutrition. She was part of the Noone family for just six days, and weighed six pounds at her death.

Through tears, Lana said, she told her pastor that God must not want her and Byron to become parents.

Then, a month later, they received another call to go to Kennedy Airport the following day, and were once again handed a baby girl wrapped in a blanket. She was on the last Operation Baby Lift flight out of Vietnam, and the Noones named her Jennifer. She went on to attend H. Frank Carey High School, Drew University and Columbia University.

Lana also adopted  a son Jason Noone from Korea later in the decade, and he is now  the father of her two granchildren,  the eldest of whom Jason named after the sister he never met.  Heather and Jayden currently attend Carey High School.

But through it all, Lana never forgot about her granddaughter's namesake,  and vowed to keep the legacy of Operation Babylift alive. In 2005 she co-founded the website VietnamBabylift.org to connect adoptees, families, Vietnam veterans and civilians who assisted with the operation. The site also helps adoptees search for their birth parents and siblings.

In 2015, Noone organized a reunion for the evacuees and their adoptive parents at the New Jersey Vietnam Veterans Memorial, where the group dedicated a plaque to the 138 casualties of the doomed first flight.

Lana told her and Byron’s story in a book, “Global Mom: Notes from a Pioneer Adoptive Family,” and in “Children of the April Rain,” which received a standing ovation at a staged reading at the New York City Vietnam Veterans Memorial Plaza in April 2017.

Last year, Noone met Valentina Janek at a local diner and told her her story. Janek, a co-host of the “Long Island Breakfast Club Show” said she thought it would be a great story to share on the program because Noone never quit — a lesson the club emphasizes with its members.

“When I met Lana, it all blended,” Janek said.

So she spoke to her co-host, Gregg Cajuste, and they hosted Noone on their show last year. At the time, they said, they would like to stage the play for the community. “We really want to get her story told,” Cajuste said. “It’s like history — history has to be told.”

But amid the coronavirus pandemic, the Breakfast Club was unable to host the performance in April, in honor of the 45th anniversary of the airlift. Then, a few weeks ago, Janek said, Noone suggested that they do a live reading for community members for Veterans Day.

Janek contacted local businesses about putting together raffle baskets or donating food, and reached out to Gerry Ferretti, an actor who runs the Long Island Film Festival every year. Ferretti, in turn, reached out to his friends, who did the reading last Sunday. “I’m always looking to help other artists and creative people,” Ferretti said, adding that he especially enjoys “seeing people take their personal experiences and putting [them] down on paper.”

The local actors did not have time to rehearse before the big show on Sunday, but they succeeded in telling the story of Operation Babylift, from the very first to the last.

“It’s such a fascinating story,” Cajuste said. “People don’t appreciate what people did in the past, and we take for granted what people went through.”