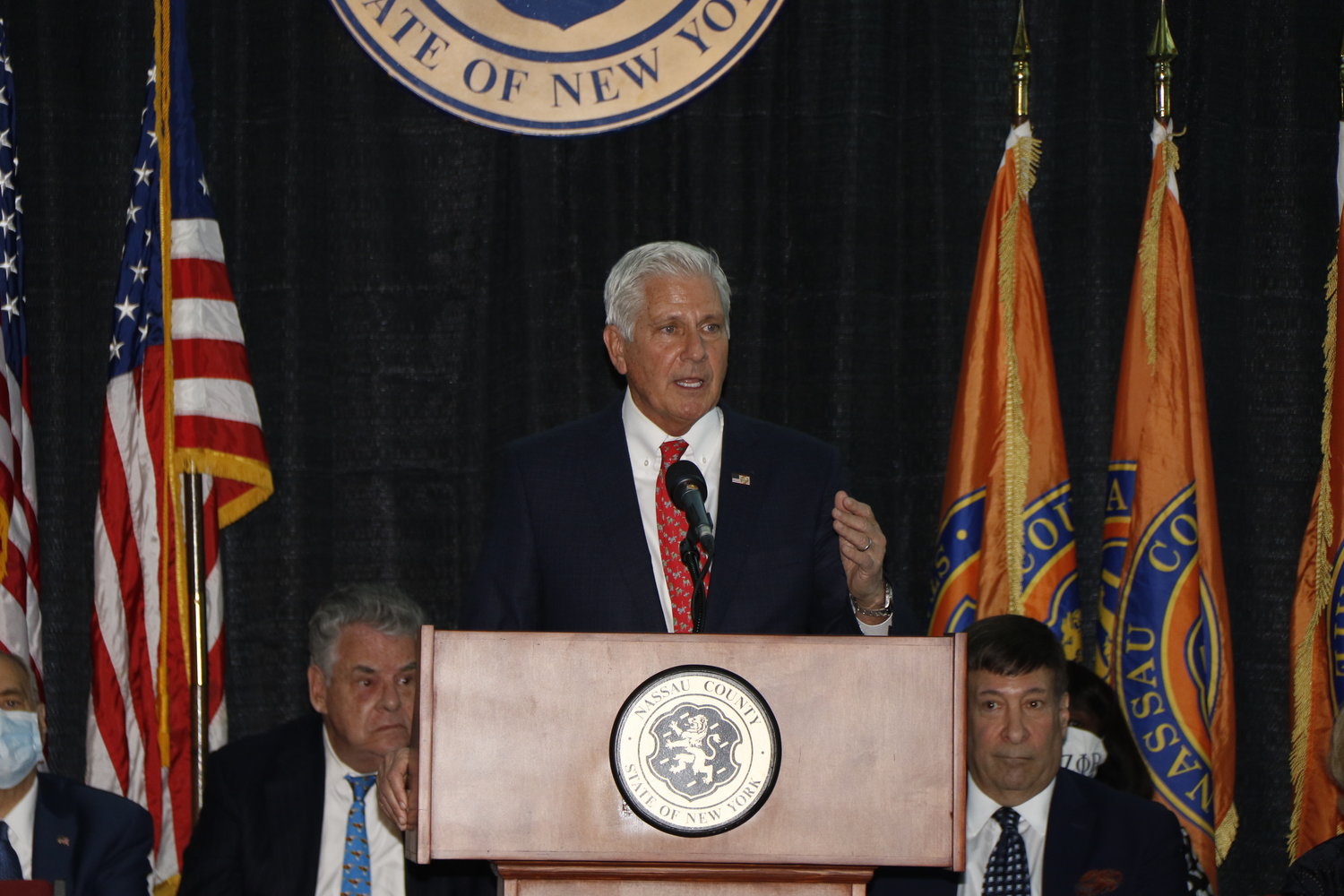 We weren’t going to stand in the way of providing $375 checks to those who wanted to apply for them.”
Steve Rhoads, County legislator
By Mallory Wilson

Signed into law last October when Blakeman’s predecessor, Laura Curran, was still in office, the program was supposed to allocate up to $100 million in federal funds from the American Rescue Plan as direct payments for up to 400,000 qualifying Nassau residents. The county overall received $193 million from the act, which President Biden signed into law in March 2021.

In a letter to county legislators, Blakeman said he wanted to stop the program because of “extremely low participation” and because the program seems to be “trickling out.” He planned to pull the plug May 15, allowing any applications submitted by that day to be processed, but nothing more after that.

Roughly 70,000 payments were processed amounting to a little over $26 million — just a quarter of the money budgeted for the program. To get the check, a household had to submit an application with documentation verifying income, typically in the form of an income tax return, as well as provide proof of residency.

“We received a check about a month ago,” Joe Dertinger, an East Meadow resident wrote to the Herald. “After a couple of months of submission errors, they actually called me and helped me clarify some of the qualification questions, so with the submission issues in mind, overall it took about six months to receive the check.”

The program has had a rather complicated history since Curran, a Democrat, first introduced it a year ago. The program’s first draft would have automatically issued checks to anyone receiving rebates through the state’s school tax relief or enhanced school tax relief programs. Homeowners with household income less than $500,000 and receiving the school tax exemptions would qualify.

Some county legislators were skeptical about the program from the beginning, especially on the Republican side of the aisle. Legislator Tom McKevitt, for example, wanted to see proof from either the U.S. Treasury Department or another counsel saying the county was allowed to run this program with the designated federal funds — proof Curran never provided.

Instead, Curran revised the program last August, this time with the income requirement under $169,000.

“The second time she unveiled the program, we still wanted to see documentation that said we could do this program,” McKevitt said. “It took months for us to get the documentation, and when we did it, wasn’t from the Treasury Department. It was from outside counsel.”

Steve Rhoads said he also questioned whether the money was being used for the right purpose.

“One of the concerns was that the money could have been used in a better way,” the Republican legislator said. “We weren’t going to stand in the way of providing $375 checks to those who wanted to apply for them, but it was an onerous process to be able to do it, and most people simply didn’t appear to be interested in it.”

Democrats in the Legislature wrote their own letter to Blakeman on April 28, claiming the administration failed to “adequately communicate a crucial and significant change in eligibility requirements.” This change, they said, “drastically” restricted the number of Nassau County families that can receive the payments, adding it would result in “economic harm to taxpayers at a time when they can least afford it.”

“I wasn’t able to apply [when the program was first announced] since we were late in filing 2020 tax returns, I didn’t have my info,” Faye Dungca, an East Meadow resident wrote to the Herald. “Fast forward to two months ago when I tried applying and I checked the site and was so disappointed to know that the eligibility requirement was decreased to $76,050 or less.

Rhoads and McKevitt disagreed, however, believing the low participation was more a product of the application process than changes at the federal level.

“A lot of people who called my office were either very hesitant to provide their income or refused to do it,” McKevitt said. “People just felt that the county shouldn’t have that information, or whatever it may be. People are just not very willing to give up their income tax returns.”

“You had to go through a lot of documentation,” Rhoads said. “You had to provide a lot of critical information to the county just to qualify for $375.”

Democratic legislators blamed the slowdown on the “willful decision to essentially mothball this program by refusing to adequately promote it.” But Rhoads points out the program was advertised on the county website, and through a direct mailer to eligible households.

“It’s tough,” Rhoads said. “Information was also sent out in email blasts, but ultimately that only works if people read and take a look at it.”

Blakeman has yet to share his plans for the remaining federal money, but county legislators urge him to get the ball rolling soon. Any funds not used by 2026 must be returned to Washington.

“I want to make sure that people are receiving the money they’re entitled to,” McKevitt said. “But the last thing I want to see is the federal government take the money back.”

Democrats want Blakeman to keep the program in place at least through the end of the year, especially since the pool of eligible households grew significant with the income requirements dropping to below $76,050.

There are restrictions on what the county can do with the money — 50 pages of rules, in fact, Rhoads said. But Blakeman could use money to offset taxes, essentially giving homeowners a break.

Rhoads also would like to provide tuition assistance for anyone who lost their job, or students of parents who lost their jobs, to go to Nassau Community College either for job training or to simply qualify for scholarships.

“I think there are lots of good the government could do with the money,” McKevitt said. “Whether it’s for infrastructure, whether it’s aid to veterans, I just want to make sure the money is used here and not sent back to Washington.”