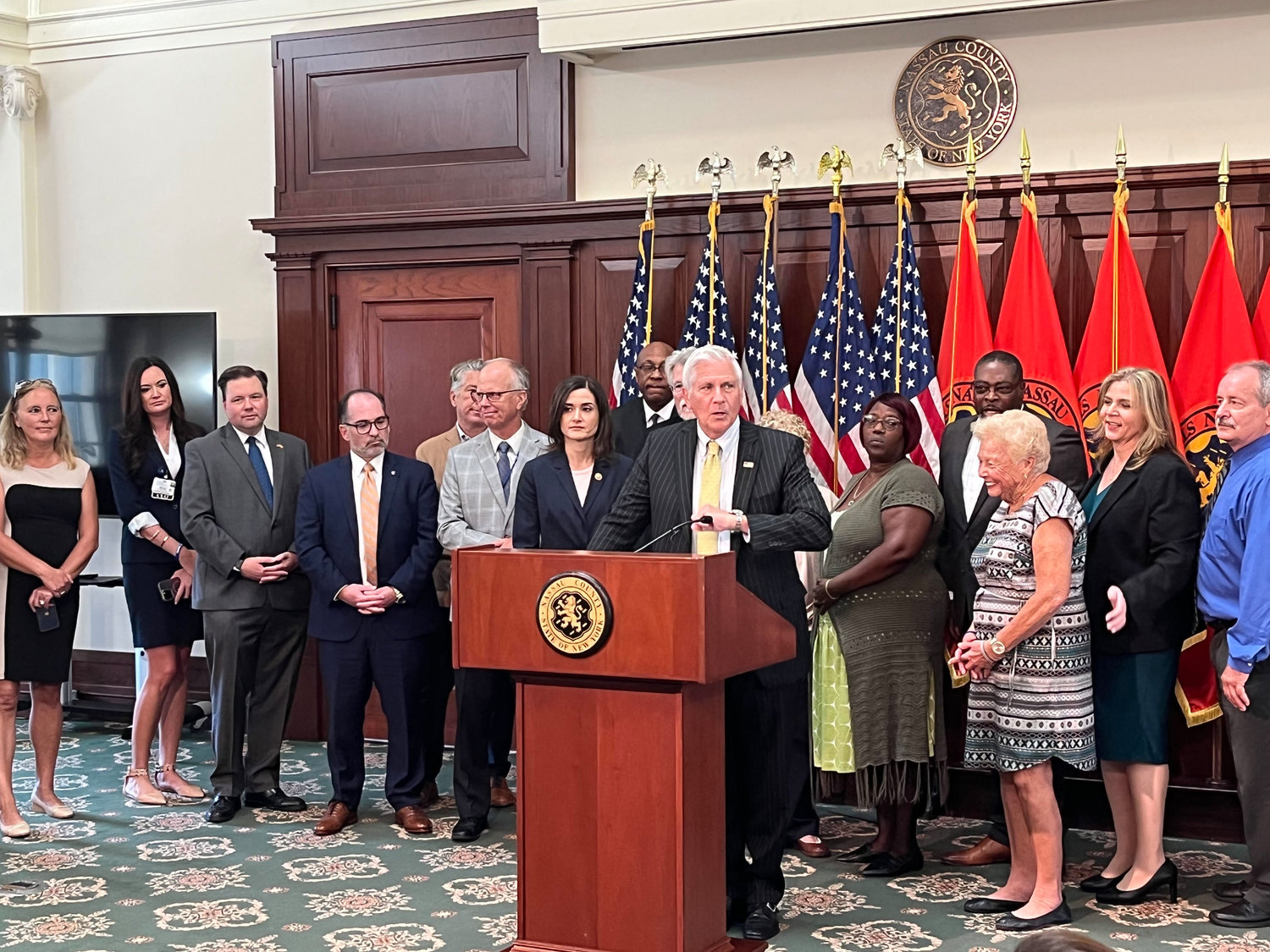 Nassau County Executive Bruce Blakeman said he was directing nearly $2.5 million to opioid addiction treatment centers. The funds are part of $70 million the county received from the historic $26 billion nationwide settlement with opioid distributors and manufacturers, in an effort to bring the opioid addiction crisis under control.
Will Sheeline/Herald

I’m so glad that these opioid companies are finally being held responsible for what they’ve done to our kids.”
Delia DeRiggi Whitton, Nassau County legislator
By Will Sheeline

Nassau County has nearly $70 million collecting a little dust in a bank account — but not for long. County Executive Bruce Blakeman has earmarked $2.5 million for opioid addiction treatment, and local hospitals, clinics and other community organizations should expect millions more.
“We are committed to make sure that all of the money goes toward the three goals that the money was provided for,” Blakeman told reporters last week. “That is prevention, education and treatment.”
The money was part of a $26 billion national settlement with opioid distributors in February — AmerisourceBergen, Cardinal Health and McKesson — as well as Johnson & Johnson for what has been alleged as their role in creating the opioid addiction epidemic in the first place.
The U.S. Department of Health and Human Services officially declared it a public health emergency in 2017 — the same year more than 600 people on Long Island died of opioid overdoses, according to a 2019 report from the Fiscal Policy Institute.
The $70 million represents roughly 7 percent of the funds allocated to New York intended specifically for Nassau, first hammered out more than a year ago.


The money, Blakeman said, will go a long way toward reducing the strain on health care providers and addiction specialists. The county is already working on spending another $15 million — something the county executive says he hopes can be an annual disbursement to help combat the opioid epidemic.
But although there is still a lot of money left, Blakeman says his administration is working slowly and carefully to ensure that all funds go where they’re needed.
County Legislator Delia DeRiggi-Whitton, representing the county’s minority caucus, emphasizing the historic importance of the donations while hoping Blakeman and Republicans might move faster to get the $70 million distributed to those who need it most.
“I’m so glad that these opioid companies are finally being held responsible for what they’ve done to our kids,” DeRiggi-Whitton said. “In my opinion, I support (Blakeman) for being careful. But I also really hope we expedite this as quickly as possible.”
Matthew Bruderman, chair of Nassau University Medical Center’s board of directors, made it clear to reporters last week that time alone hasn’t made the crisis any better in the county, Long Island, or the United States. Without funds like these, hospitals and community health organizations are ill-prepared to deal with the scope of the issue.
“We all know the opioid epidemic and drug addiction is damaging the lives of many people across the country,” Bruderman said. “NUMC is the only hospital on Long Island that has an in-patient detox facility. (Yet), 90 percent of the time, we are at full capacity.”
Nassau County’s new health commissioner, Dr. Irina Gelman, praised the county’s commitment to improving public health, making her job much easier.
“I think this funding will be instrumental in really starting to address the issue at hand, and provide necessary services to our community,” Gelman said. “As the county executive said, this is only the beginning. And I’m definitely looking forward to more to come.”
Report an inappropriate comment

For school district, third time’s the charm for the bond