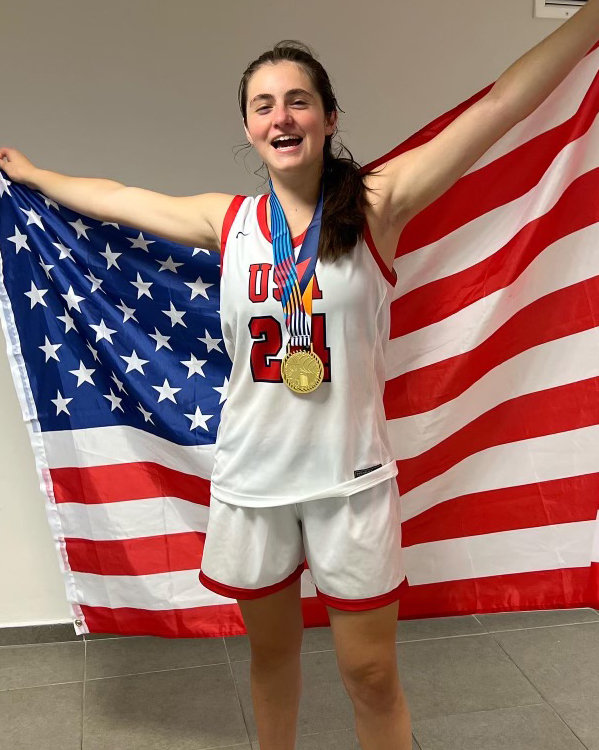 Riley Weiss, a rising senior at Hewlett High School, scored 25 points in the USA’s win over Israel in the girls’ basketball U18 gold medal game at the Maccabiah Games.
Courtesy Jeff Weiss
By Tony Bellissimo

Riley Weiss continues to add to her basketball achievements.
Coming off her second straight Nassau County girls’ basketball scoring title, Weiss, who next month will begin her senior year at Hewlett High School, competed in the 21st Maccabiah Games July 12-26 in Israel, and helped the United States Under-18 girls’ squad capture gold.
Weiss scored a team-high 25 points to lead USA to a 78-67 victory over Israel in the U18 girls’ gold medal game July 24. One week earlier, in pool play, Weiss scored 32 points in a thrilling come-from-behind 79-75 overtime win over Israel. USA trailed that game by 9 points after three quarters.
“It was a lot of fun and a great experience,” said Weiss, who flew from Newark, New Jersey, to Tel Aviv on July 2 and returned on July 26. “My teammates were great, and I met a lot of different athletes from other countries. It all exceeded my expectations.”
The American squad went 6-0, also defeating Australia twice, and Canada and Germany once each. None of those teams were competitive, but both battles against Israel were intense, Weiss said. Her team was coached by Ellen Mager, a 1982 Oyster Bay High School graduate who most recently coached basketball at Briarcliff High School in Westchester County.


“Israel played zone against us in the gold medal game, and Riley’s outside shooting was critical,” Mager said. “They kept forcing her further and further from the basket, but she kept hitting shot after shot.
“She makes the game look effortless — it’s really amazing,” Mager added. “I was so impressed by her.”
The Maccabiah Games are open to Jewish athletes from around the world, and to all Israeli citizens regardless of their religion. Competitors from 80 countries took part this summer in 42 sports categories. With 10,000 athletes, it was the largest Maccabiah Games ever.
The opening ceremony took place July 14 at Teddy Stadium in Jerusalem, which was also designated as the “Capital of the Maccabiah” for the Games. Israeli gymnasts and Olympic champions Linoy Ashram and Artem Dolgopyat lit the ceremonial torch.
President Biden attended, cheering on the U.S. delegation of 1,400 athletes — larger than the American team at the 2020 Summer Olympics. Biden was the first American president to attend the Maccabiah Games.
“It was pretty incredible,” Weiss said of the opening ceremony. “Everyone from every country watched the USA-vs.-Canada hockey game, and a little while after it was over, the ceremonies began.
“Athletes from each country walked out together, just like in the Olympics,” she added. “I know some of the U.S. teams got to meet President Biden.”
Longtime Lawrence Woodmere Academy boys’ basketball head coach Jeff Weiss, Riley’s father, was on hand as well. “Competing in the Games is a wonderful experience,” he said. “Playing basketball internationally and creating relationships with athletes across the globe was awesome for Riley.”
From July 3 to 12, Riley said, a typical day for her and her teammates consisted of morning and afternoon practices, at 7 a.m. and 5 p.m., and daily tours around Tel Aviv and Jerusalem. Competition began July 13.
Weiss, who has averaged 40.5 points per game for Hewlett over the past two seasons and has 2,083 career points, came home not only with a gold medal, but also with some souvenir clothing from athletes from other countries.
“I’ve got Brazilian and Australian zip-up jackets and a few Israeli T-shirts for trading a USA sweatshirt and T-shirts,” she said. “It was really cool, and I’d like to go back to compete again.”
Report an inappropriate comment