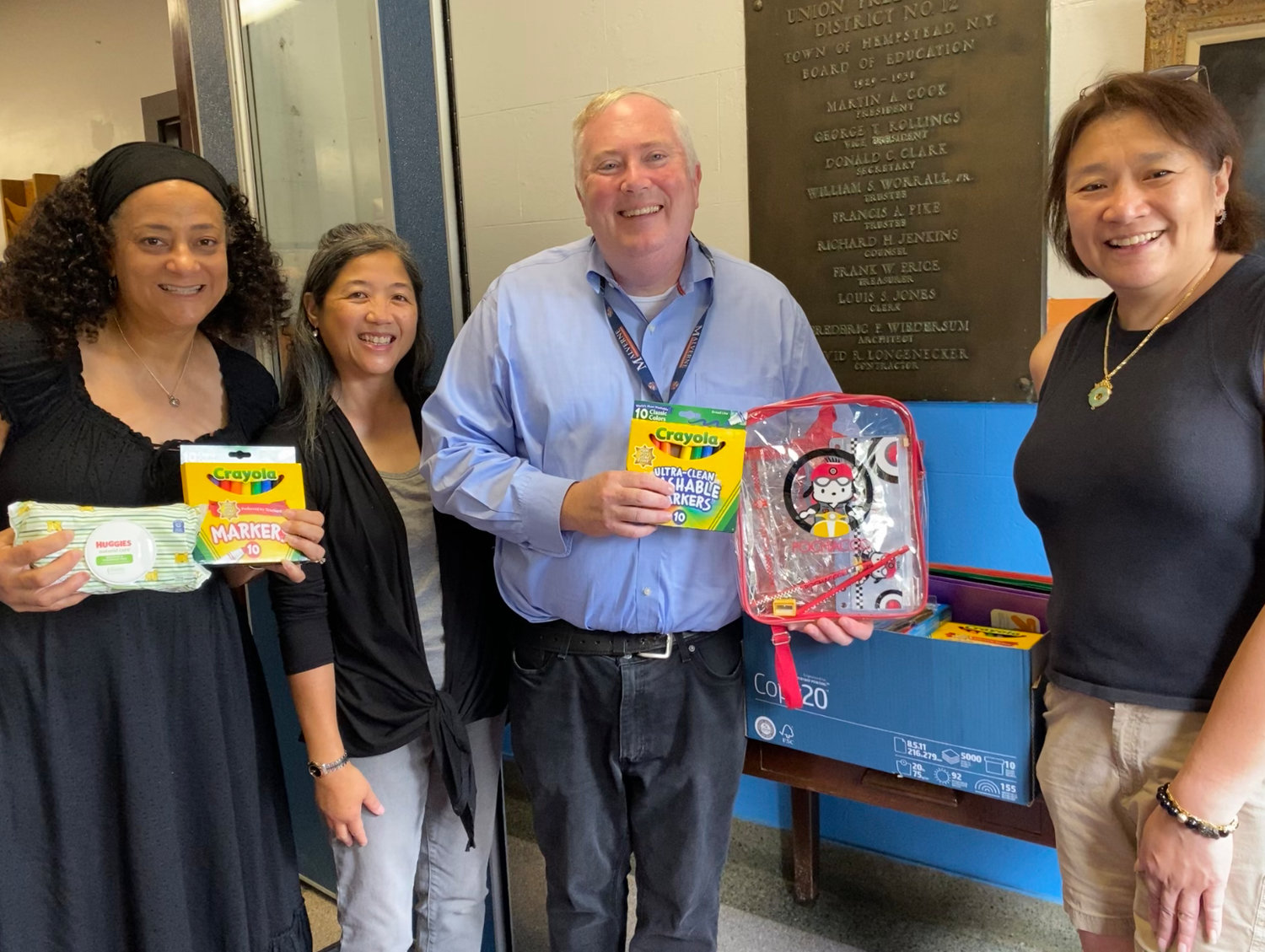 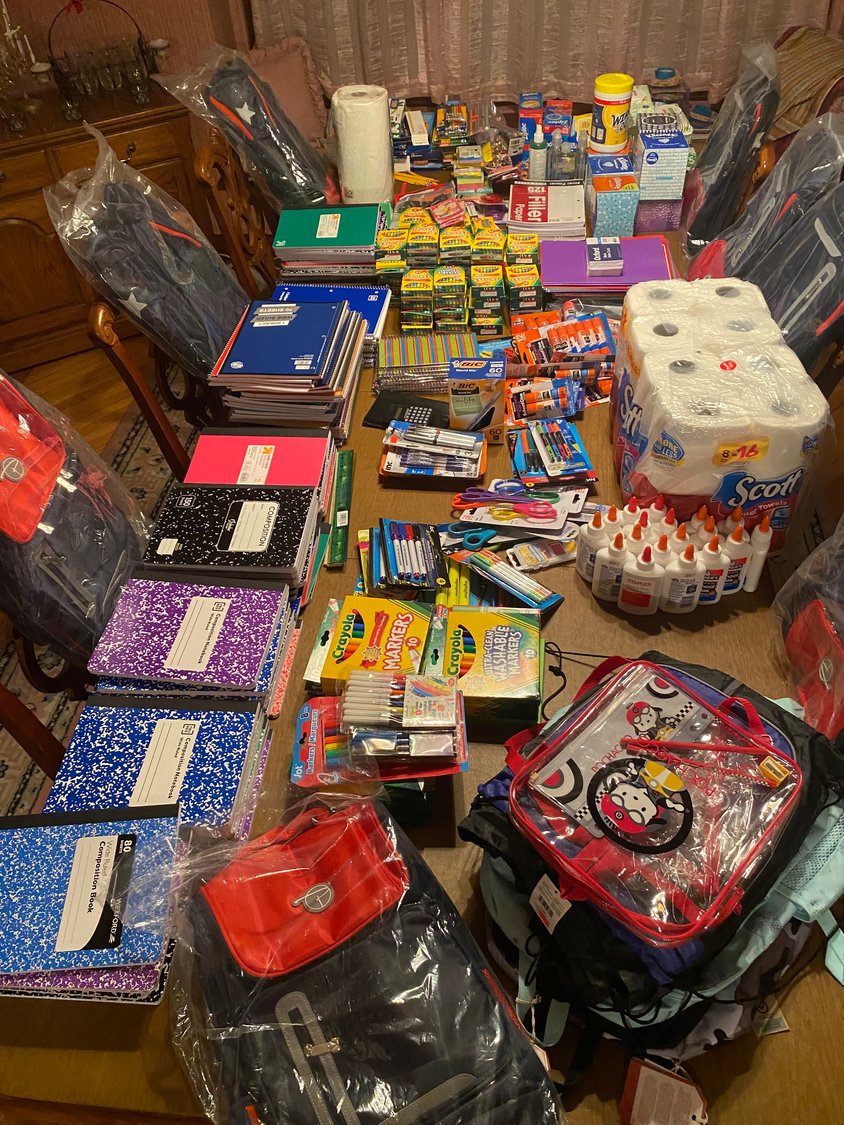 The Kiwanis Club collected an abundance of school supplies to hand out at the start of the new school year.
Courtesy Eliza Tom 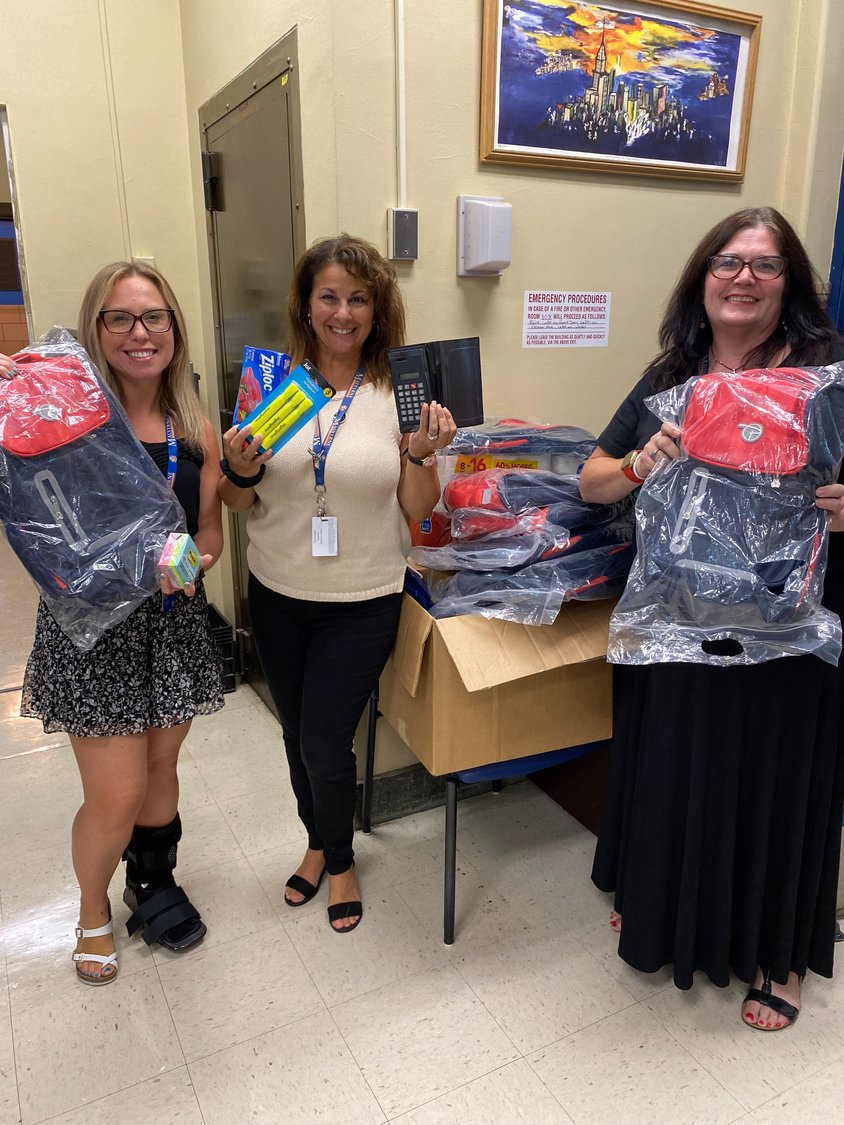 Community organizations running school-supply collection drives last month expressed concerns that their collection boxes would be relatively empty compared with past years, but they have found some creative ways to collect the items that students need and, as it turns out, gathered more than enough.

“The community was, as usual, very generous,” Eliza Tom, president of the Malverne Kiwanis Club, said at Malverne’s monthly village board meeting on Sept. 7. “We were able to drop off supplies, this morning actually, for Davison, Downing, Herber and Malverne High School.”

In addition to donating supplies to schools in the Malverne district, Kiwanis shared its bounty with the Valley Stream 13 School District, which serves parts of western Malverne.

“Since we felt we had an abundance of supplies, we also dropped off a box of supplies to Dever,” Tom said, referring to  James A. Dever Elementary School. “We thought that would be a good contribution to them. They were very happy and pleased.”

Tom added that she hoped the collection drive would be a jumping-off point for further collaboration between the Kiwanis Club and public schools in the future. “I got to meet some of the community members — the social workers, counselors and principals,” she said, “and we hope to strengthen our relationship with them.”

Malverne’s American Legion Post 44 was especially concerned about its supply collection efforts as summer came to an end. While Kiwanis and the office of Assemblywoman Judy Griffin had already distributed collection boxes at the Malverne Public Library, at Village Hall and elsewhere, legion members said they feared there would be no good locations for ther boxes.

“Thank you to all the people who generously gave to the school supply effort,” Carol Hassett, of Post 44, said at the village board meeting. “We did have an overabundance of school supply boxes, so we did something different after talking with Carol Lagos from the library.”

Rather than set up collection boxes, Hassett and the legion opted to raise funds for school supplies in a new way. “So I thought about it, and we came up with a lemonade stand,” she said.

Enlisting the help of her grandchildren, Hassett set up the stand on Aug. 8 at her son’s house on Franklin Avenue, and since it’s near a railroad crossing, cars had to stop, and many drivers and passengers turned out to eager patrons.

The stand also received a boost from Malverne Fire Department Chief Kevin Garvey. “A big shout-out and thank you to the Fire Department,” Hassett said. “The chief showed up, bought lemonade and then told all his fireman friends to come down and buy lemonade at the Hassetts for school supplies.”

“We did have very interesting people stop by,” Hassett added. “Even when they stopped for the train, people rolled down their windows and were asking for lemonade. So the train helped us, too. Thank you to the Long Island Rail Road.”

The legion used the proceeds from the lemonade stand to purchase backpacks and supplies, which were delivered to military families at the First Marine Corps District in Garden City.

“We did make our goal,” Hassett said. “We were able to get 160 backpacks filled. So a lot of people go down Franklin Avenue. And that was just one day.”