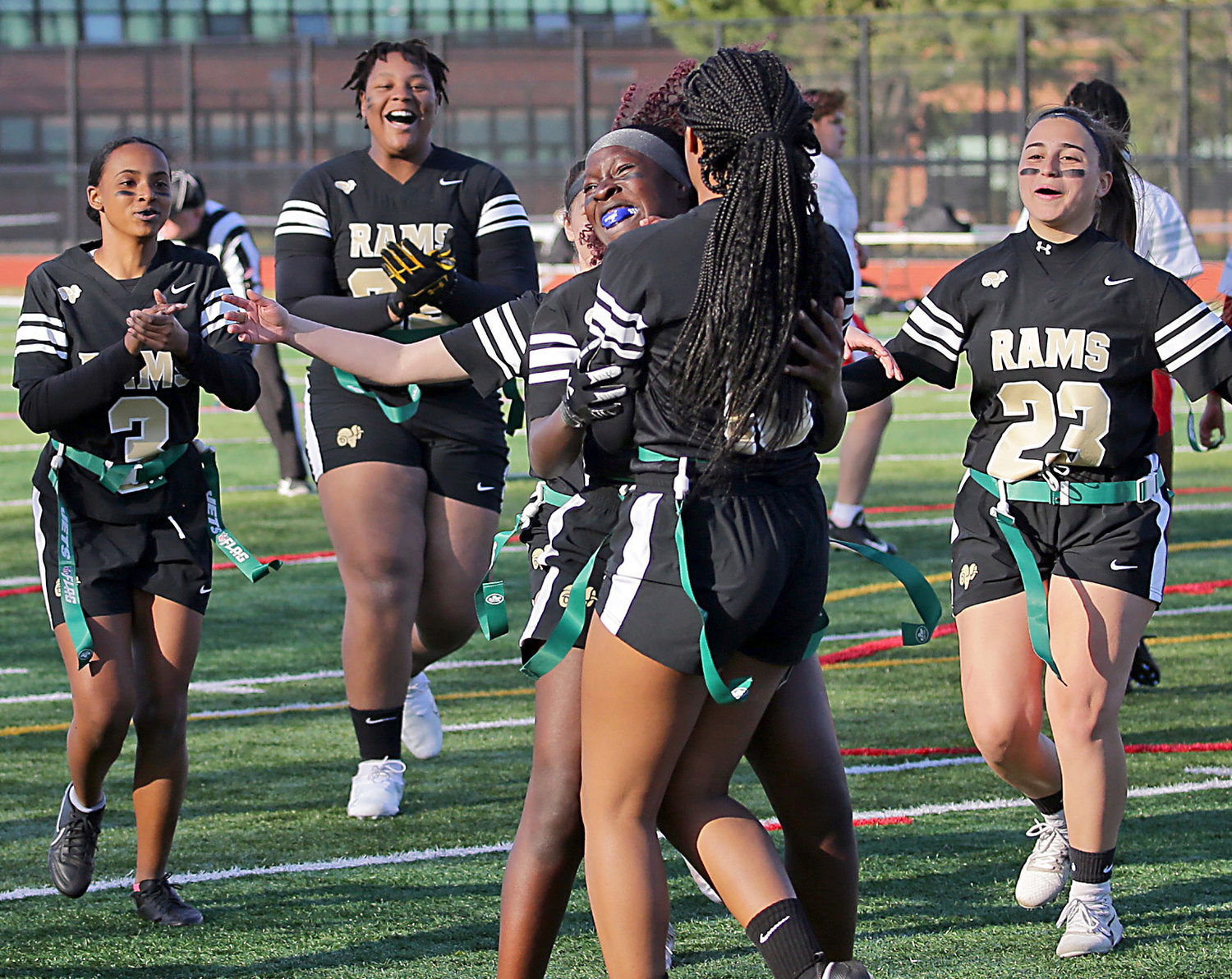 West Hempstead celebrated after Chance Mingo’s touchdown in the second half of its 6-0 victory over Freeport on April 28.
Brian Ballweg/Herald 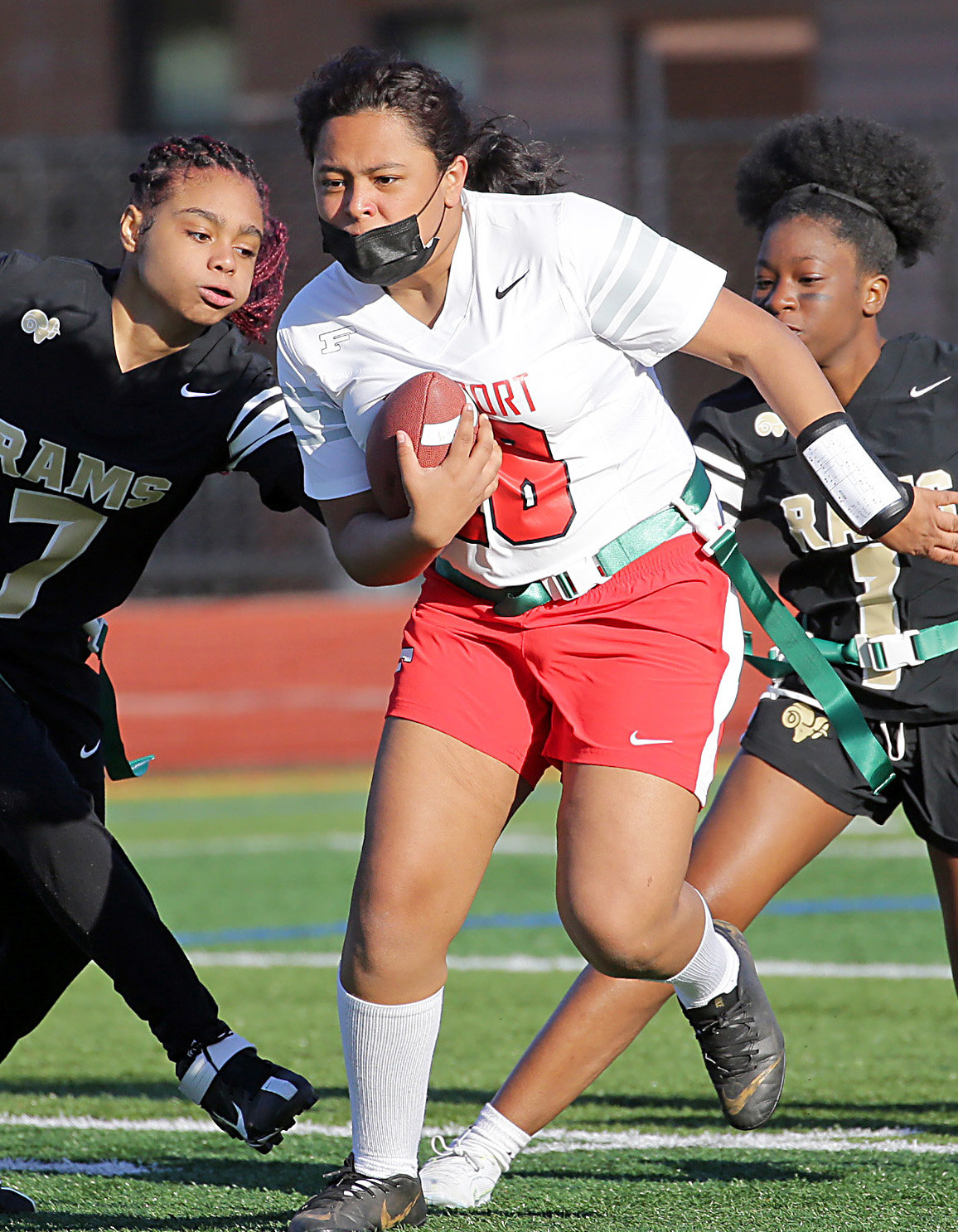 Amanda Healy and Chance Mingo took advantage of the blustery conditions and, together, helped their team make history.
Healy threw a 10-yard touchdown pass to Mingo early in the second half for the game’s only score and Katelin Martin, Madison and Mackenzie Cates and Brooke Friedman keyed a defense that led West Hempstead to a 6-0 win over Freeport on April 28 for the school’s first-ever flag football victory.
“We didn’t have the wind in the first half and it was a challenge,” West Hempstead coach Dana Taglioni said. “But our girls worked pretty hard. I have full confidence in both of the groups that I put out.”
After a scoreless first half, Freeport possessed the ball to start the second, but turned it over at its own 22 after Cates stopped a Red Devil ball carrier behind the line of scrimmage on 4th-and-6. Three plays later, Healy rolled slightly to her right and, with the wind at her back, arced a pass that Mingo corralled in the end zone.
“I was just looking for the open girl and Chance was open,” Healy said. “I was able to get it over [the defense’s] heads.”


Freeport nearly scored on its next possession. Linda Blanco Monterrosa rumbled for 48 yards before getting caught from behind at the West Hempstead 35 and gained six yards on the next play for another first down. But the offense stalled and faced a 4th-and goal at the Ram 25 when controversy ensued.
Widney Destin caught a slant pass from quarterback Kendra Teran and was approaching the end zone when officials ruled that Madison Cates grabbed her flag just before the senior crossed the goal line.
“The ref on this side said he didn’t see the first flag pull, but neither of the other guys made a no-touchdown call so, for me, if no one saw it then you’ve got to go with the call that was made, which was touchdown,” Freeport coach Jimmy Jones said. “But the guy on the far side said he saw [the flag pull].”
Friedman thwarted another Freeport fourth-down run at the Ram 25 with just over 12 minutes left.
West Hempstead (1-1) and Freeport (0-3) are among nine schools in Nassau County and 17 on Long Island competing in this “trial” varsity sport supported by the New York Jets and Nike. After the regular season, there will be a playoff semifinal, county final and Long Island championship.
“It means a lot because it’s opening up a lot of opportunities for us,” Teran said. “I grew up playing football and it’s just fun being with a bunch of girls that play football instead of it being just a bunch of boys playing football.”
A game consists of two 24-minute halves and played on an 80-yard field that is 40 yards wide. The end zone starts at each 10-yard line on a traditional football field and first down markers are permanently placed at both 30-yard lines and midfield. There is no placekicking, and uncaught punts and fumbles are ruled dead where it lands.