What to do about Woodfield Road? 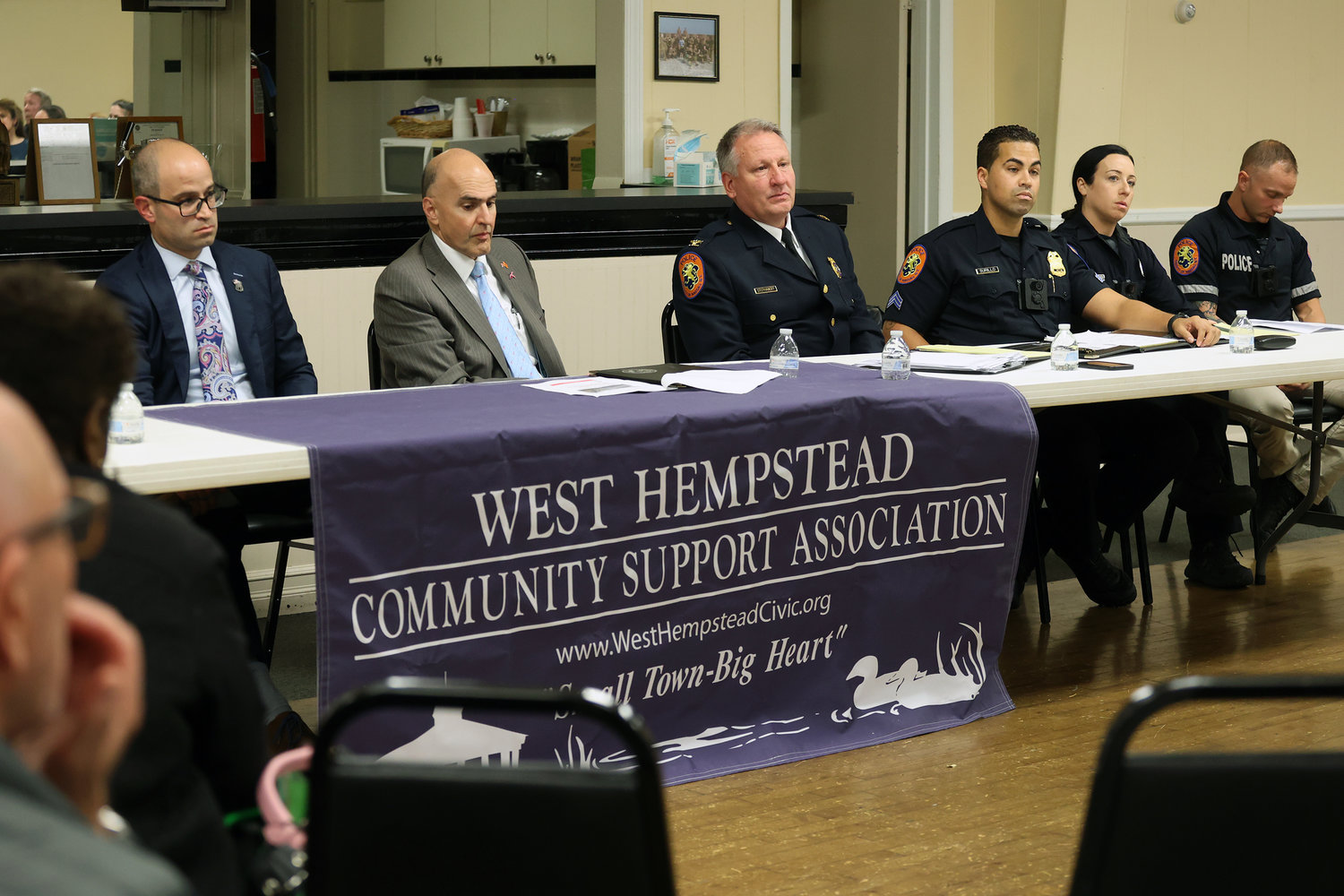 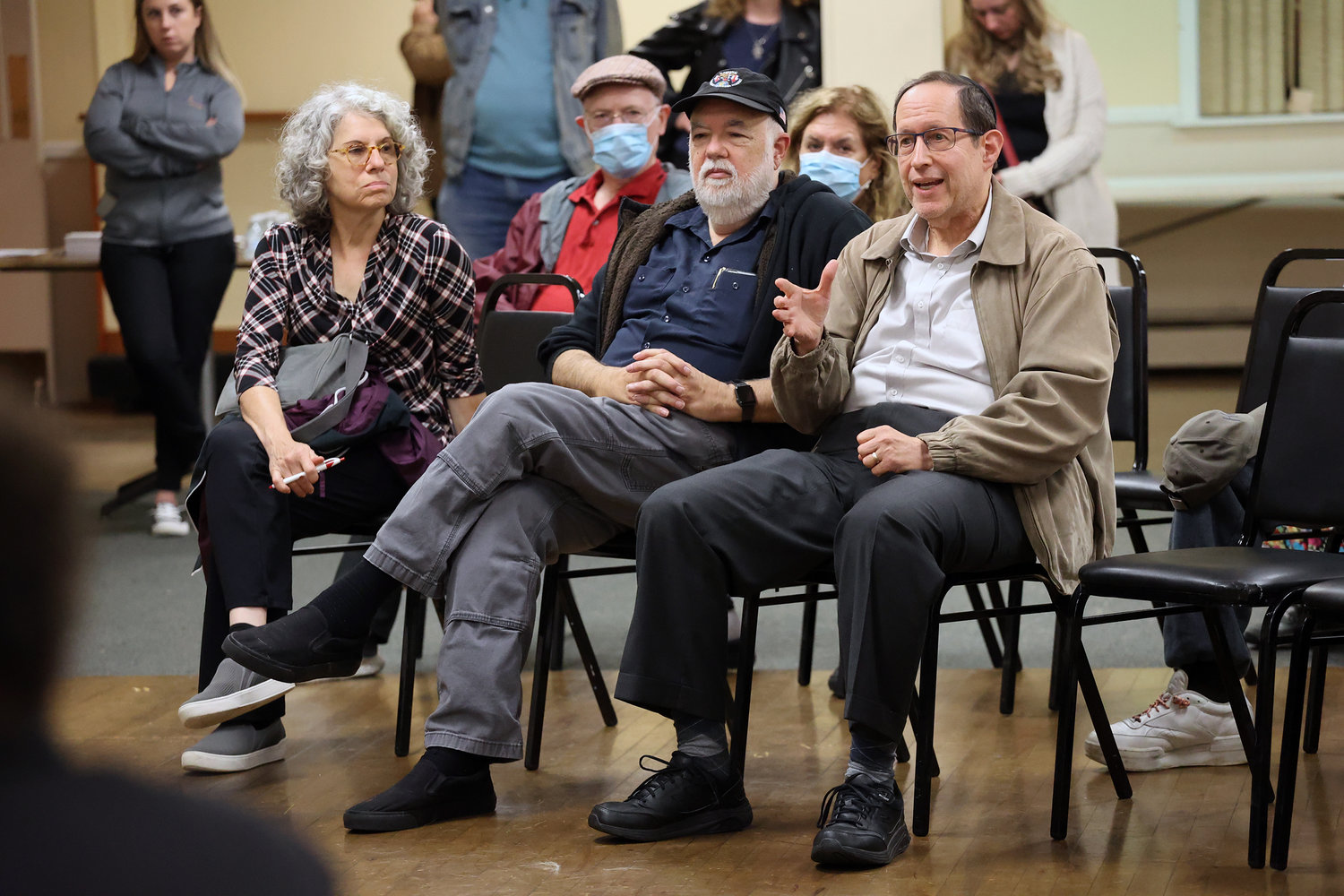 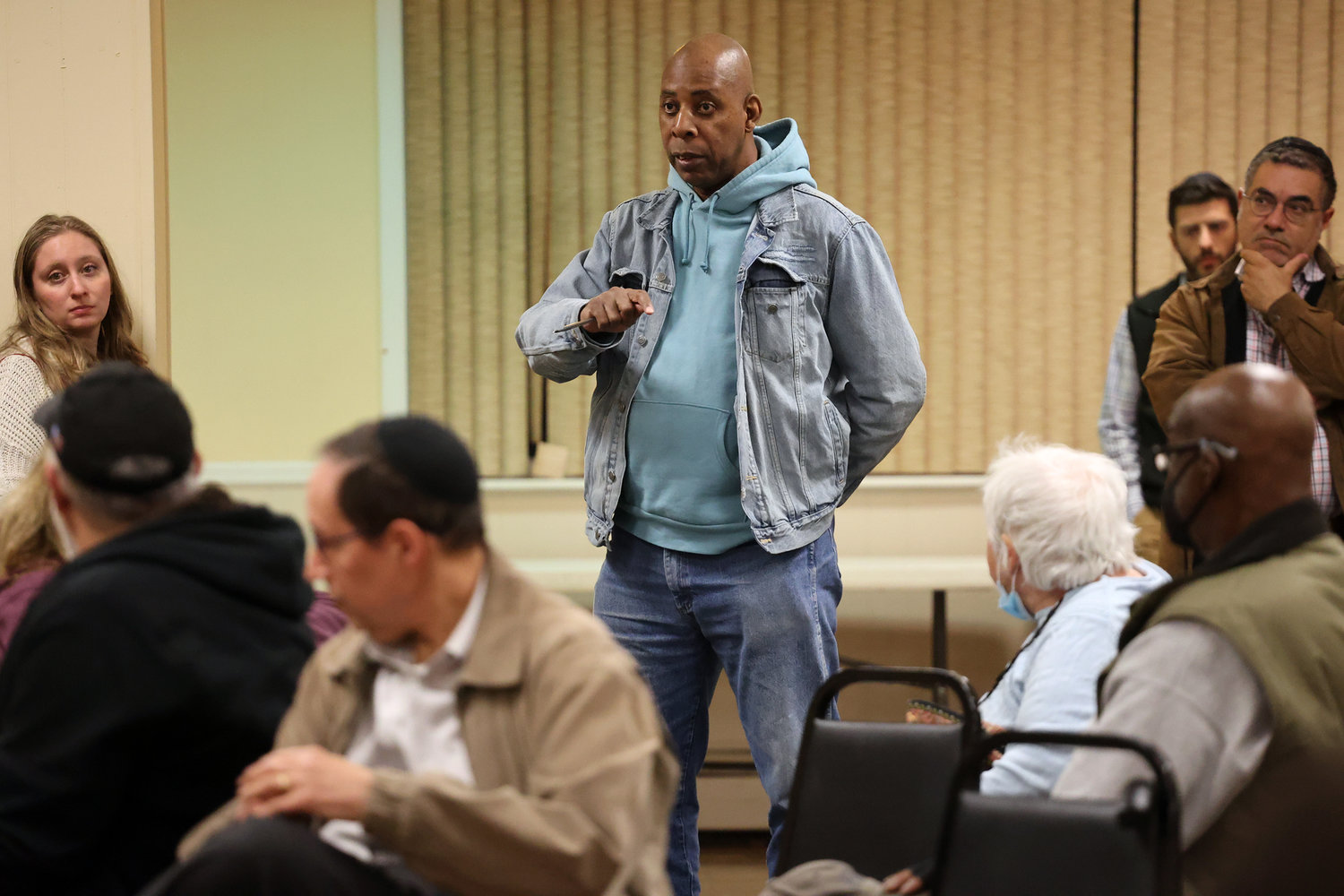 Retired NYPD Detective Bill Jacobs asked a panel of elected officials and police officers what could be done to protect students from traffic as they walk to bus stops.
Sue Grieco/Herald
Previous Next
By Kyle Chin

Tensions ran high at a special town meeting in West Hempstead on Thursday, as community members gathered with elected officials and Nassau County police to determine the next steps in addressing traffic safety in the wake of the death of 12-year-old Tomas Molina, of West Hempstead.

Tomas was struck and killed by a car on Oct. 2 as he crossed Woodfield Road near its intersection with Lindberg Street. Nassau County police impounded the driver’s car, and have said that an investigation is continuing.

Community association President Maureen Greenberg also reached out to the Town of Hempstead and the Nassau County Department of Public Works. The town declined to send representatives, because the county administers Woodfield Road. The DPW did not respond to Greenberg’s invitation to send a representative.

While the association had intended for all questions to the panel to be submitted on index card, attendees quickly began asking their questions directly. Some asked about whether a speed bump might be added to Woodfield Road. The panel quickly dismissed the suggestion, because a speed bump can add a potential danger, capable of sending a vehicle airborne.

Other residents stressed the need for more police enforcement, especially at the start and end of school. One parent, Leah Sclair, brought her children to the meeting to make clear her personal stake in the issue.

“I brought my kids with me because we have a bus stop on Woodfield, and I just want you to look at them,” Sclair said. “Because I can’t tell you how many times drivers have almost hit my kids. This is just so sad that it’s taken this to come here, but you need to do something during drop-off.”

Another attendee, Robert Harris, said he had lived on Woodfield for 43 years, and recalled petitioning for changes in 2002. While then County Legislator Vincent Muscarella said he got “30 mph” painted on the road, he claimed that his hands were tied when it came to doing anything more, according to Harris.

“The game’s over if that’s the position they take,” Harris said. “This department has to be pushed,” he added, referring to the DPW. “They have to be repeatedly pushed. And then maybe somebody will listen to us at some point.”

Harris and numerous other attendees pressed the panelists on the need for more streetlights and crossings on the problem road. Larry Doyle said he had lived near Woodfield for 60 years, and that he had campaigned for changes three times, to no avail. He echoed the concerns about pedestrian crossings.

“I wish the people at engineering would come down and try, at Maple Street, to cross Woodfield Road, watching 80-mile-an-hour traffic going each way,” Doyle said. “It’s like Russian roulette.”

Giuffrè said he had pressed the DPW and County Executive Bruce Blakeman to expedite a traffic review of Woodfield. While he expressed support for road alterations, he also noted that driver behavior is also a problem.

“The biggest problem, sadly, is that people drive like lunatics,” Giuffre said. “Did you read the article in the Herald? Did you read about the two people that were killed in the car accident on Westminster Road? How fast was the car going? One hundred miles an hour. We could have a traffic light and stop sign on every single corner. Some car traveling 100 miles an hour will still kill someone. It’s crazy.”

Stephanoff said that the 5th Precinct would direct additional monitoring and traffic enforcement resources to Woodfield Road for the foreseeable future. Additionally, the precinct deployed a trailer with a speed monitoring sign to the road following the meeting.

The community is awaiting the result of a traffic study being conducted by the county, after which the community support association will convene a follow-up meeting. Many stressed that they would continue to press the county and other agencies until something changes.

“People are out here at night because they care,” said Joseph Varon, who lives near Woodfield Road and said he frequently sees speeding on the road. “The room is packed with people from our community and we’re not going to let this go.”