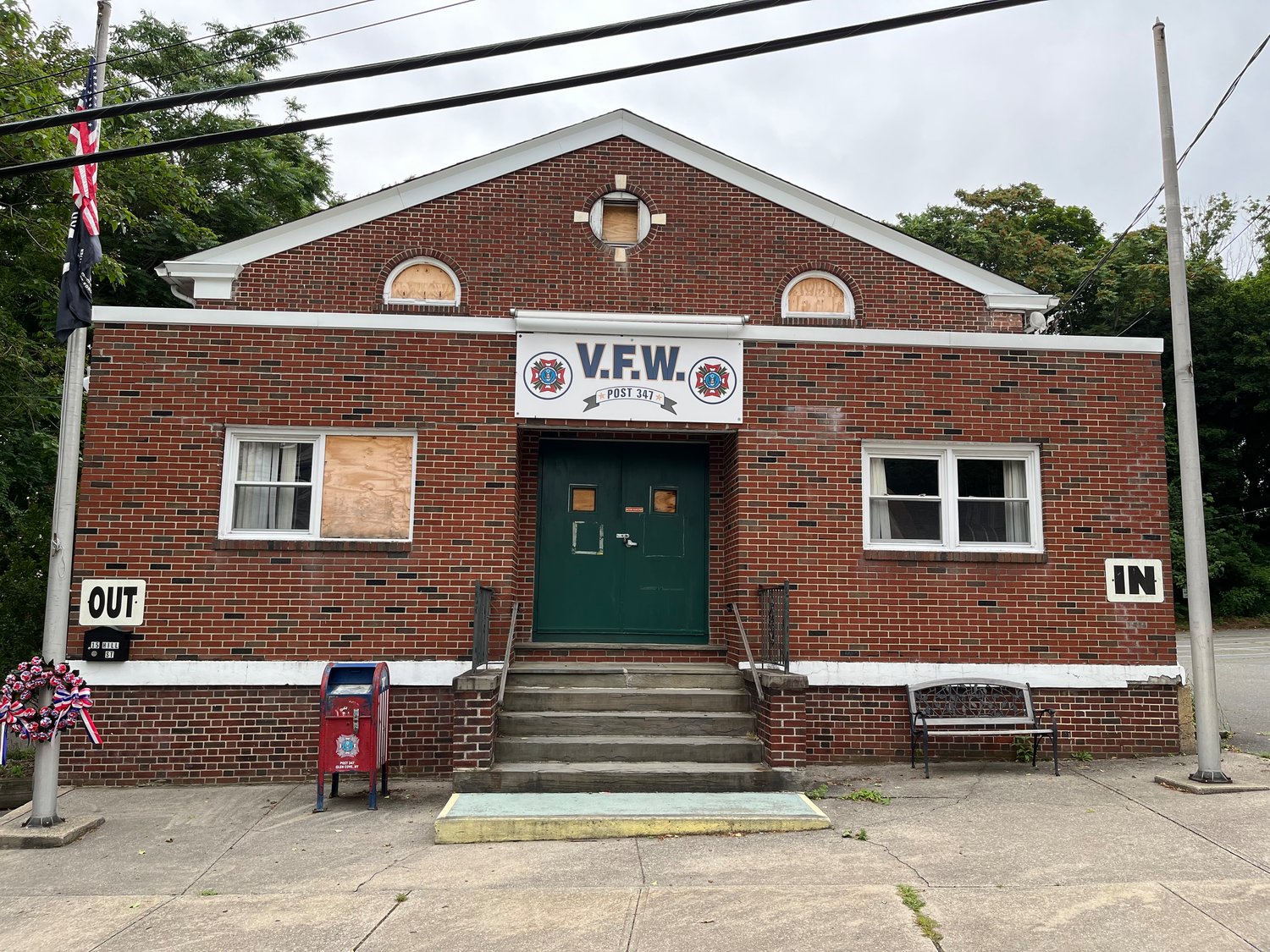 The Glen Cove Veterans of Foreign Wars Post 347 was damaged in a fire last August, and has applied to receive money from the updated American Rescue Plan Act.
Will Sheeline/Herald

This would really be a huge help to us, and at this point we’ll take anything we can get.”
Reginald Butt, Commander, American Legion Quentin Roosevelt Post 4
By Will Sheeline

A March 2022 amendment to the American Rescue Plan Act of 2021 has finally made veterans organizations like the American Legion and the Veterans of Foreign Wars eligible for coronavirus relief funding. Thus far, however, few American Legion posts on Long Island have begun the process of applying for the funds, due in part to a lack of awareness, a lack of trust in the promise by the federal government and, in some cases, a refusal to accept the money.
The original legislation, signed in March of 2021, provided financial aid to small business and nonprofits in the form of grants and loans. But veterans groups did not qualify for funds because they were tax-exempt organizations.
Now that the wording of the bill has been revised, American Legion posts can claim up to $10,000 in relief funds. Tony Jimenez, a member of American Legion Post 76 in Glen Cove, said he believes that the money will be a boon to many posts, particularly those with meeting halls, which can be costly to maintain.
“We want veterans’ halls to be in place, you know, as a gathering place and a show-off place,” Jimenez said. “These are brick-and-mortar symbols of our veterans, so it brings more notice to the veterans on a daily basis, instead of a couple of times a year on Veterans’ Day and Memorial Day.”
But according to Ralph Casey, third division vice commander of the Nassau County American Legion and a member of Glenwood Landing Post 336, few legion posts have been successful in claiming any funds from ARPA. Casey said he had spoken to three local post commanders who told him they had applied for the funds, including members of American Legion Quentin Roosevelt Post 4 in Oyster Bay and of Glen Cove Veterans of Foreign Wars Post 347.


So far, Casey said, none had received any money, and numerous posts, including those on the North Shore, are still going through the process. According to Casey, the Glen Cove VFW’s application was rejected despite the fact that its building was damaged in a fire less than a year ago, and the group can’t afford to rebuild it, despite that fact that it has held several fundraisers, including one hosted by U.S. Rep. Tom Suozzi.
“The VFW in Glen Cove — if you recall, it burned down, so they got a lot of donations to help rebuild it, and the government basically said, ‘Well, you have all this money, you don’t qualify for a loan,’” Casey said. “They’re just looking at the books, and so of all the posts that have applied for this that I’ve talked to, not one has gotten any money. I think the whole thing stinks.”
Ralph Esposito, a veteran and the director of Nassau County’s Veterans Service Agency, which is in charge of distributing the funds, claimed that thus far, of the 13 posts that have applied, none have been rejected. Furthermore, Esposito said, the VSA has done everything it can to make the application process as smooth and straightforward as possible, and has met with numerous commanders from various posts to make them aware of it.
“We mailed every organization a copy of the Nassau County Veterans Support Grant, and everything is on there that they need to apply,” Esposito said. “We’re doing everything we can to get it for them, because, really, it’s their money. They just need to come take it.”
Nonetheless, several post commanders and members contacted by the Herald said they had not even heard that the ARPA money existed, while others, such as Vincent Libertini, commander of Bayville’s American Legion Robert H. Spittel Post 1285, had only found out in the past week or two.
Libertini said he had read about it in a newspaper, and that no government officials had contacted the post. So it had yet to apply, and members agreed at a meeting on June 21 to do more research before they began the process.
“Mostly we don’t know anything about this,” Libertini said. “Nothing was mailed to us — we only really know about it from reading the paper, and from a contact I have from another post.”
Butt said he thought it was worth going through the application process to try to get the money. The Oyster Bay Legion applied roughly four weeks ago, and, he said, considering how financially damaging the pandemic was for many posts, if the funds are available, they will be a huge boon for them and others on Long Island.
“We haven’t been able to have any fundraisers in the last few years because we weren’t able to do anything during the pandemic,” Butt said. “Covid hit us pretty hard — we basically took a loss every year. So, you know, this would really be a huge help to us, and at this point we’ll take anything we can get.”
Report an inappropriate comment