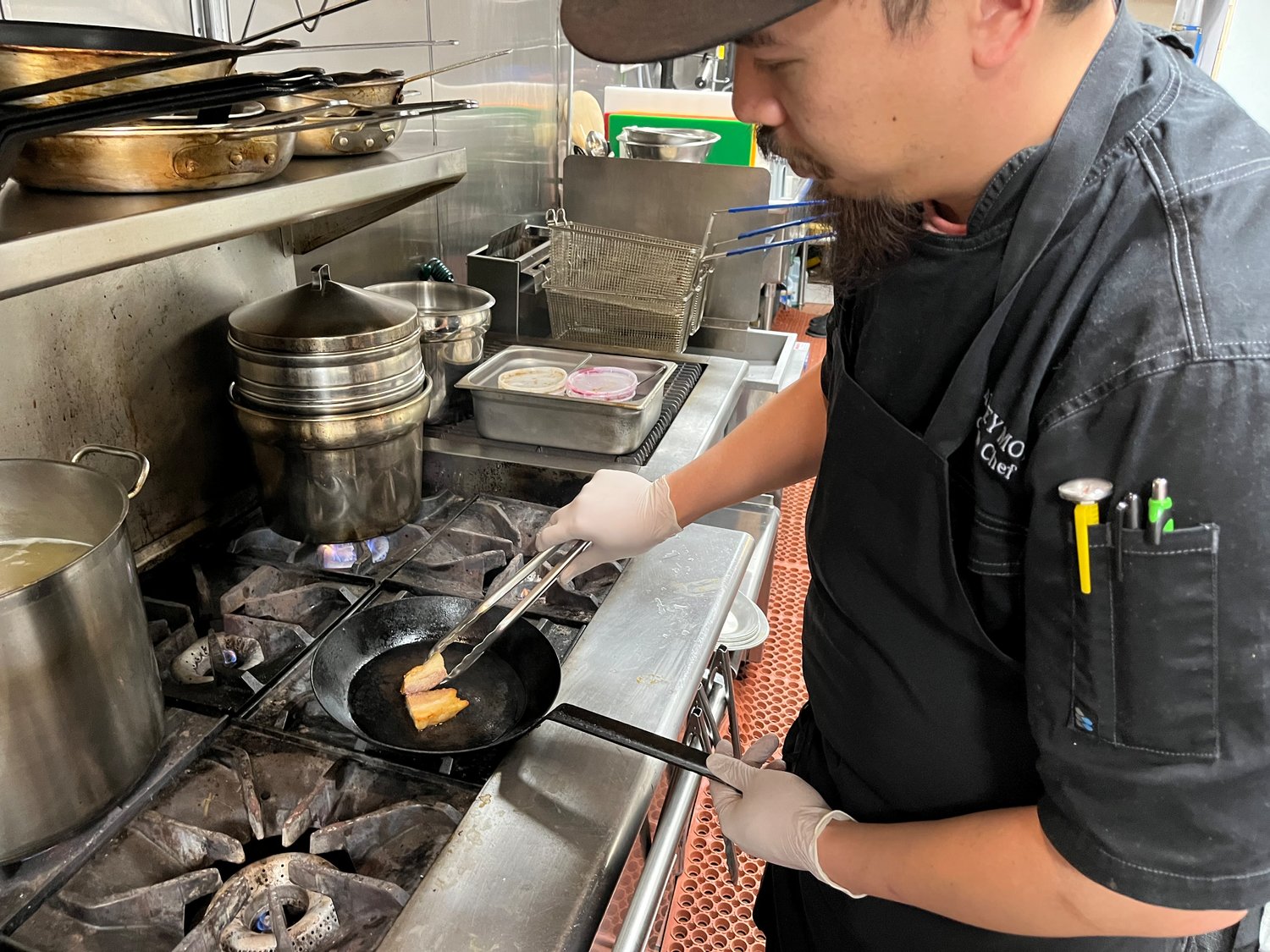 Executive Chef Charley Moi has worked to perfect Asian and French cuisine, Southern and Asian-style BBQ and numerous other culinary genres.
Will Sheeline/Herald 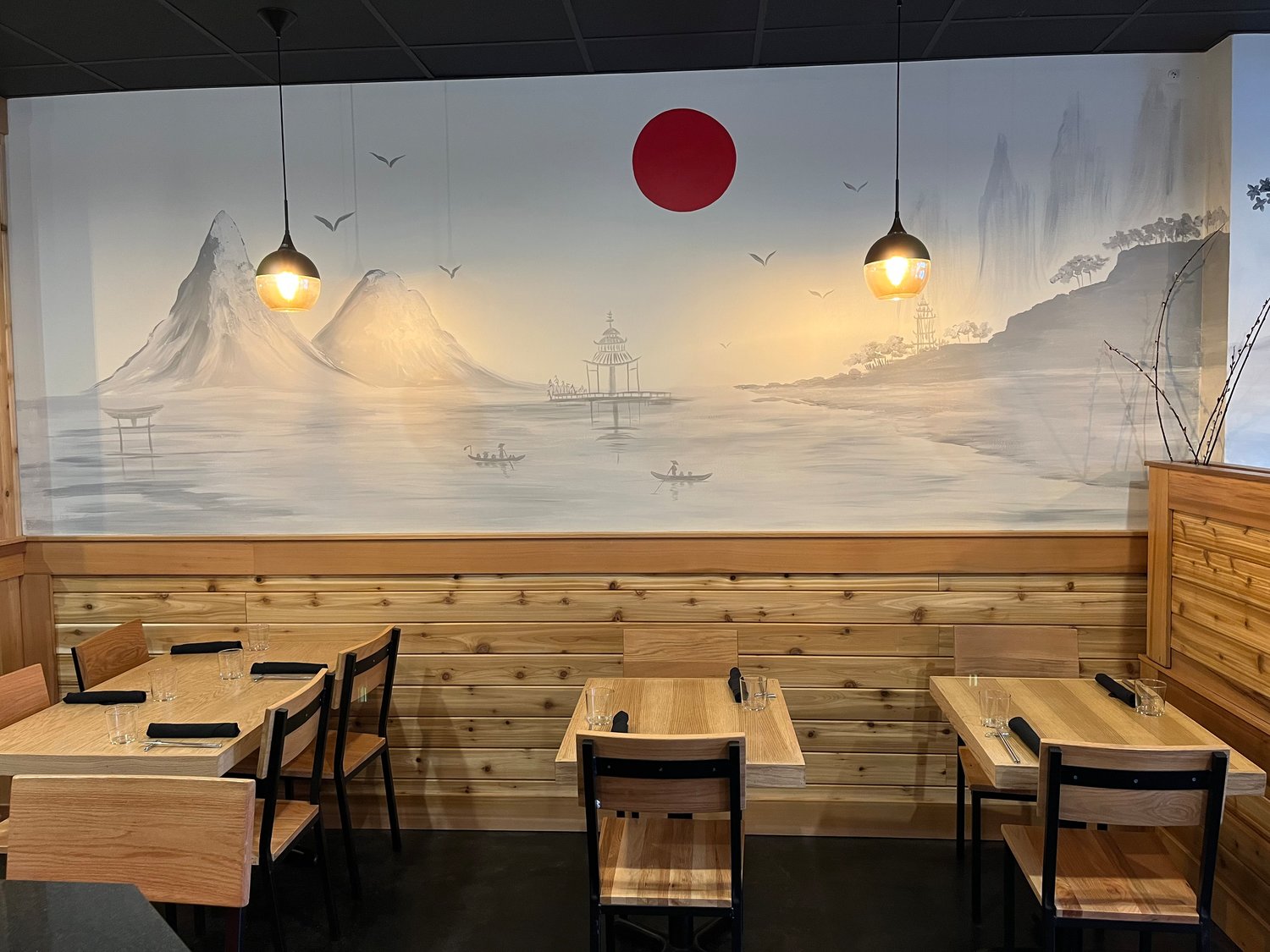 The mural at Danny’s Izakaya, which takes up an entire wall, was painted by @arlenemurals.
Will Sheeline/Herald
Previous Next
By Will Sheeline

Since the closing of Nikkei of Peru in the darkest days of the pandemic, Oyster Bay has been sorely lacking a Japanese restaurant. Now, thanks to Danny’s Izakaya, that has finally changed.

Danny’s Izakaya is a Japanese bar and restaurant at 94 South St. in Oyster Bay that opened on Feb. 23. According to one of its co-owners, Randy Klein, he and partners Danny and David Antin have already been blown away by the response from the community.

“It’s been great — the town has welcomed us beautifully,” Klein said. “Our last Friday was packed. People seem to love the ambience and our menu. It’s just been unreal.”

The Antin brothers agreed that the town had rolled out the red carpet for them. “The fact that it feels like everybody knows each other also just makes it feel like such a community here,” David said.

This isn’t Klein’s or the Antins’ first venture in the restaurant world. For nine years, Danny and David have been the co-owners of Danny’s Chinese Kitchen in Bellmore. They got started in the business after Danny was encouraged by David to leave accounting to pursue his real passion — food.

“I asked him, ‘What makes you really happy?’ and he said he was happiest at his old high school job at a Chinese restaurant,” David said of his brother.

“So he decided to open Danny’s Chinese Kitchen, I offered to support him as a sort of silent partner, you know, and the rest is history.”

Three years ago, David also left accounting to work in the restaurant business full-time, and a year and a half later, Klein, his neighbor and friend, joined the team. The trio now own and manage four Danny’s Chinese Kitchens at locations around Long Island. Danny’s Izakaya is their fifth and most ambitious opening, and their first foray into non-Chinese cuisine.

David learned about izakaya dining when he visited Tokyo. He found it to be an experience unlike anything he’d had on Long Island, he said, or anywhere in the U.S., for that matter.

“I went to this izakaya spot, and it was just amazing,” David recounted. “It’s a fun atmosphere, it’s casual, and everyone shouted hi as soon as we walked in. That energy and friendliness, that’s what I wanted to bring back to Long Island.”

An izakaya is traditionally an informal bar that serves small meals and drinks. It’s a casual spot for after-work drinking, comparable to an Irish pub.

In order to realize their vision, Klein and the Antins knew they had to do some major renovation work. The space in Oyster Bay they purchased had been a restaurant, Nikkei of Peru, but the layout didn’t work with their vision of an izakaya. So, they redid the interior, with new walls, a large mural and a new kitchen. That delayed their opening by a few months, but they were happy with the way it turned out.

“It’s such a good space, so we really had to go all out with it,” Klein said. “We know our location is great and our food is phenomenal; now we just have to make sure our service is just as good.”

Someone else who is happy with the look of the interior is the restaurant’s executive chef, Charley Moi. A native of Texas, Moi has prepared a range of styles of Asian cuisine, and studied under celebrity chefs Jean Georges and Floyd Cardoz. After having specialized in Asian-style barbecue in recent years, Moi said he was excited to lead the new restaurant’s kitchen.

“Yeah this is an awesome opportunity, for sure,” he said, “I’m at the age where challenges aren’t really challenges anymore. I see them more as a chance to try something new.”