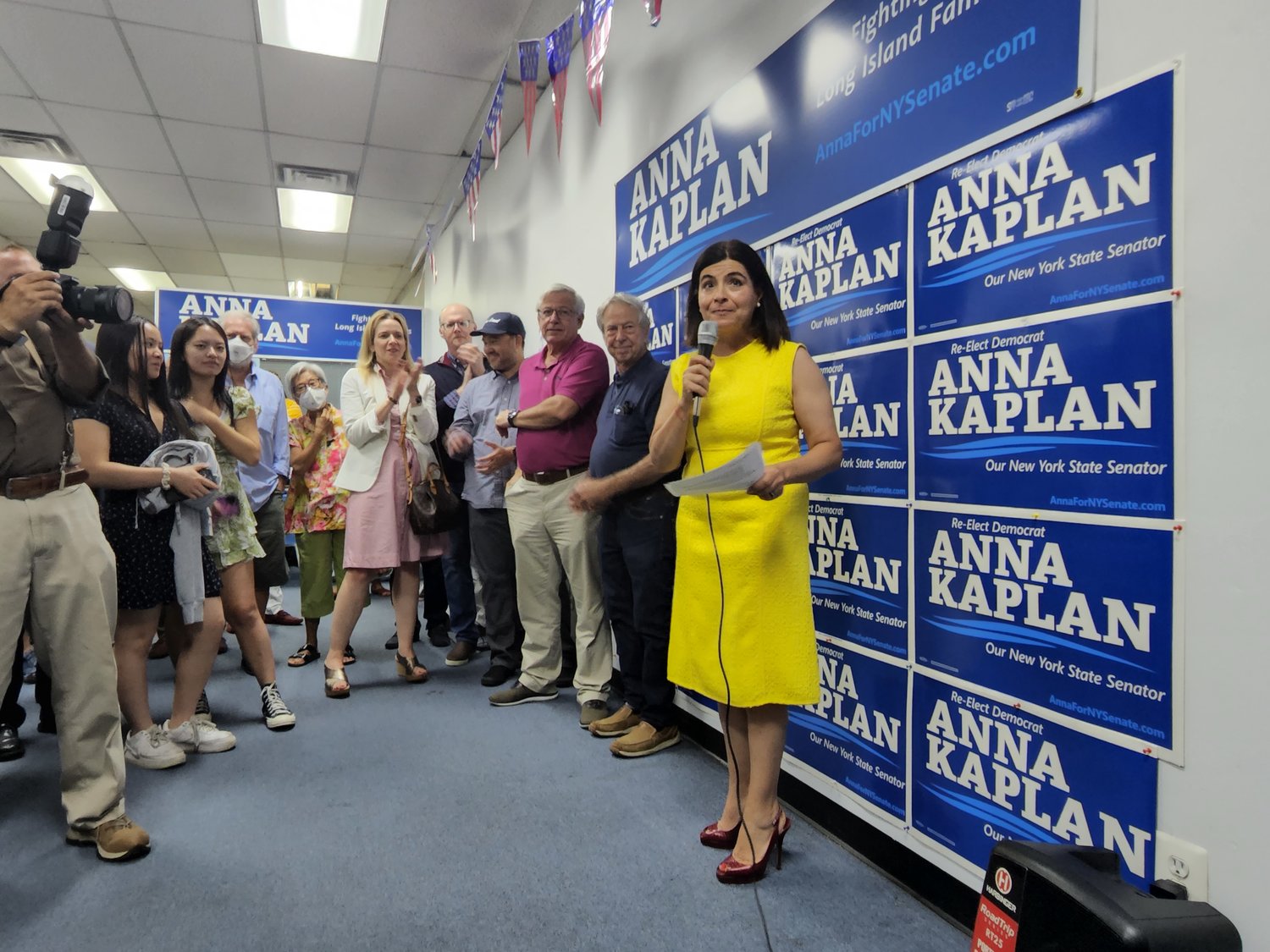 State Senator Anna Kaplan, right, at her campaign headquarters in Glen Cove spoke of her commitment to the community after she won the Democratic primary on Tuesday.
Roksana Amid/Herald 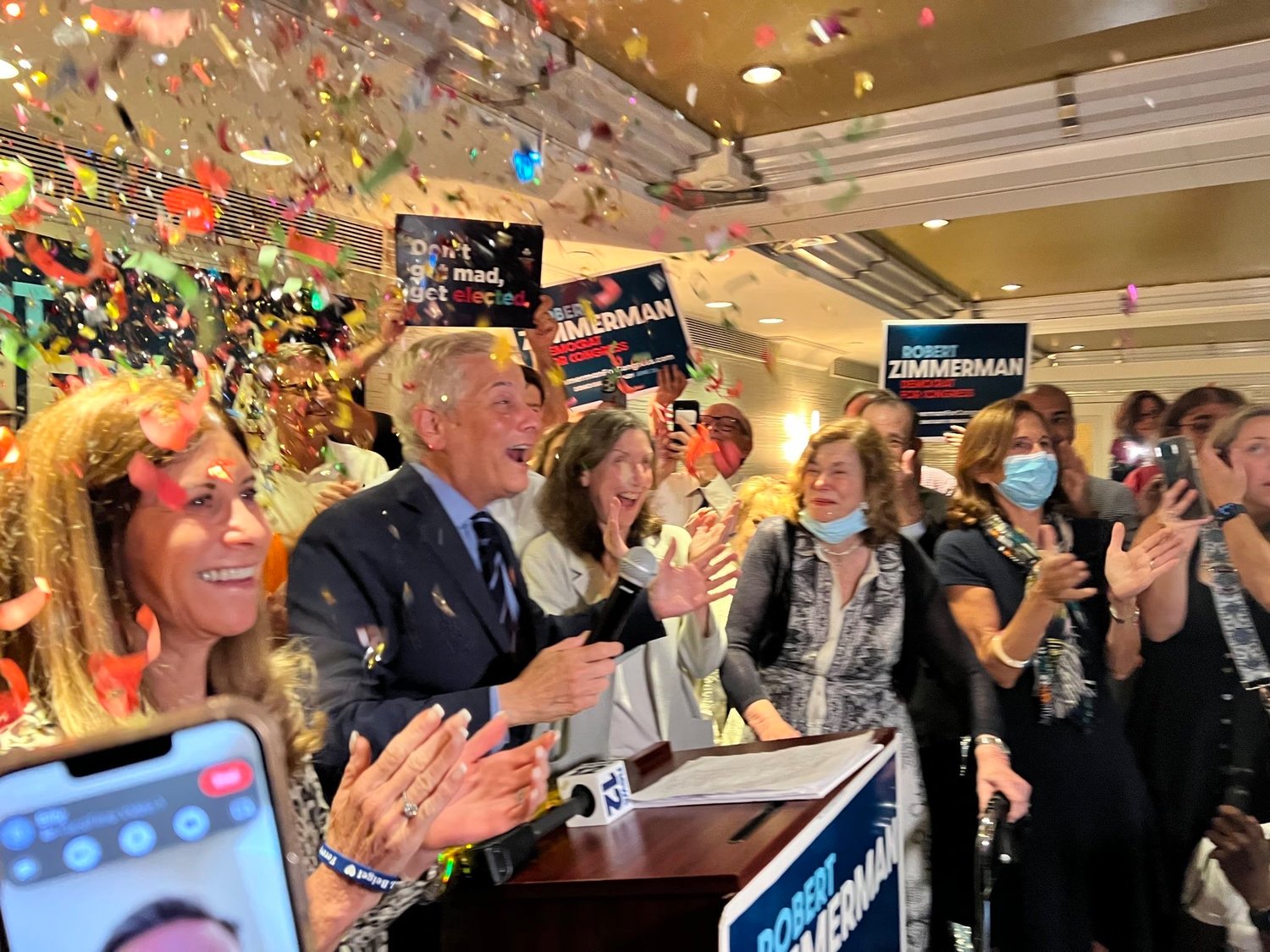 Robert Zimmerman, second from left, won the Democratic Primary on Tuesday and will run against Republican George Santos for State Senator in November.
Courtesy Robert Zimmerman
Previous Next
By Laura Lane

State Senator Anna Kaplan won the Democratic primary for the North Shore against newcomer Jeremy Joseph by a large margin on Tuesday, capturing 85 percent of the vote as of 11 p.m.

Democrat Robert Zimmerman also won in the primary for Congress, capturing 36 percent of the vote for the seat vacated by U.S. Rep. Tom Suozzi, who lost his bid for governor in the June primary. His race was a crowded one, which included veteran elected leaders Jon Kaiman, the deputy Suffolk County Executive who was also a five-term Town of North Hempstead supervisor and Josh Lafazan, who is currently serving his third term in the Nassau County Legislature. Melanie D’Arrigo and Reema Rasool who have never held office were also on the ballot with Zimmerman.

“Our victory tonight proves that when Democrats stand together and fight together, we deliver results,” Zimmerman said.

James Scheuerman, the executive director of the Nassau County Democratic Committee, said he wasn’t surprised by the election results. “This was a race with talented candidates,” he said. “The primary is over. It’s time to come together and beat the Republicans in November.”

Kaplan, 56, a North Hempstead resident, was first elected to the state Senate in 2018, becoming New York’s first Iranian-American member. Having fled to the United States for religious freedom with her family when she was 13, she is also the Legislature’s first former refugee.

Zimmerman, 67, a lifelong Democrat, is co-president and co-founder of ZE Creative Communications, a public relations firm in Great Neck, where he lives. The Democratic National Committee member of 22 years ran unsuccessfully for Congress in 1982 and for State Assembly in 1986 and 1988. He has a record of fighting against wars, supporting social and environmental justice and has fought against hate crimes in all forms, including antisemitism.

Immediately after winning the primary Zimmerman set his sights on the general election when he will face off against George Santos, his Republican challenger.

“George Santos and his radical anti-women, anti-civil rights agenda represent the opposite of everything I have stood for in my life and everything that defines our country,” Zimmerman said. “In Congress, I’ll fight to defend abortion rights, stop gun violence, protect civil rights and make Long Island and Queens more affordable for middle-class families.”

It was a difficult campaign season for all the candidates, due to the release of a new district map just months before the election, which caused the Congressional and state Senate primaries to be moved to August. And for some candidates like Kaplan, most of her new district included areas where she was unknown.

“We got this district at the end of June,” Kaplan said. “Having a 40 percent new district was a challenge. And having a second primary was another challenge. A lot of people, when we went door knocking, they thought they voted in the primary and didn’t know there was another primary.”

If re-elected in November, Kaplan will continue her fight for full access to abortion services and push for legislation to protect medical professionals providing legal abortions to out-of-state patients. She said she will work to fund public safety by supporting local law enforcement and support changes to bail reform. Kaplan promises to continue to back a permanent cap on property tax hikes and will work to close the loopholes in gun control laws.

“I’ve always told everyone that I’m a public servant. This is not about me,” she said. “I occupy the seat for the time that I’m in office, but the goal is to be the messenger and the voice of this district, and I will continue to do that.”

Zimmerman said his top priority is to fight climate change and will begin by providing flood mitigation funding for Long Island and pushing to preserve the Long Island Sound. He backs federal funding for Israel. And he will fight to ensure fair and equal housing and work to prevent discrimination in the LGBTQ+ community.

And he wants to build coalitions in Washington and reach out to people on the issues critical to his district.

“We are facing the biggest threat to democracy since the Civil War,” he said. “Everything I believe in is on the line.”

Zimmerman said he remains committed to listening to people, understanding their concerns and being persistent and aggressive to get the work done.

-Roksana Amid contributed to this story.