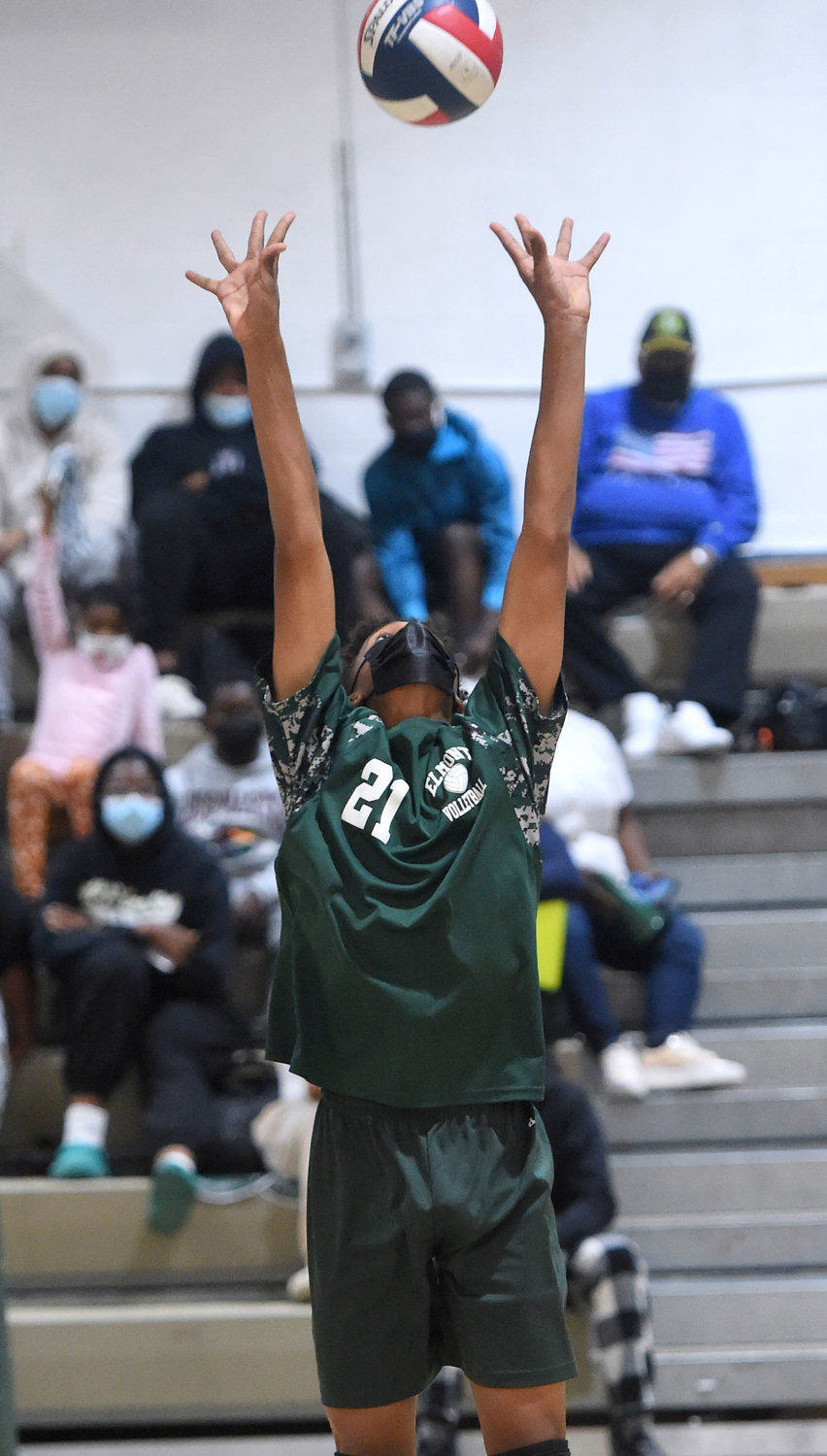 Junior setter Evan Patterson contributes in a myriad of ways for the Spartans, who clinched their first conference title since 1999 last week.
Donovan Berthoud/Herald
By Tony Bellissimo

Two years removed from a winless season, Elmont’s boys’ volleyball program locked up its first conference championship since 1999 with two matches to spare and is headed to the Nassau Class A playoffs.
The Spartans clinched the top spot in Conference C2 with a three-set sweep over visiting Plainedge on Oct. 20, upping their record to 11-1 in the process. In 2019, they were 0-16.
“This is by far the most successful team we’ve had in the seven seasons I’m coaching,” Elmont coach Ryan Straub said. “We were solid in the spring with a young team, going 5-5, and you could really see we were starting to figure it all out. The chemistry has come through big time.”
Senior outside hitter Andrew Estiverne, a third-year starter who experienced the difficult campaign two years ago, is Elmont’s offensive catalyst and ranks second in the county in kills with 235. He also leads the Spartans in service aces and is one of their most accurate passers. “Andrew is incredibly powerful and teams try to put as many blockers on his side as they can,” Straub said. “He can be strategic too, so it’s hard to defend against him.”
Estiverne had 26 kills, 12 digs and 5 aces in a 25-22, 18-25, 25-20, 25-27, 15-12 victory over previously undefeated Mepham on Oct. 15. That was Elmont’s fourth five-set win of the season, Straub noted.


Junior setter Evan Patterson had 26 assists against Mepham and is no stranger to filling up the stat sheet. He doubles as a middle blocker when in the front row and ranks second in the county in blocks. “Evan has only been playing volleyball since the spring season and he’s come a very long way in a short time,” Straub said. “There’s nothing he doesn’t do well.”
Seniors Johann James Zachariah (33 assists versus Mepham) and Shawn Redhead also play key roles as setters.
On a roster full of quality passers, Straub said junior Darius Dorsey-Rhule rates at the top. An outside hitter, Dorsey-Rhule is aggressive on the serve-receive and also racks up the points when its his turn to serve. He had 18 kills and 17 digs in the win over Mepham. “Darius is a very smart player who contributes a lot offensively and defensively,” the coach said.
The defense and overall play in the back row has been bolstered by the return of senior libero Hans Mugar. Straub said senior middle hitter Israel Alonge is Elmont’s most improved player who’s added power to his swing and provides a solid amount of blocks. Malyk Gordon, a sophomore, is the youngest member of the team and an all-around contributor, Straub said.
The Spartans’ lone defeat came at the hands of Herricks, which carried a perfect 12-0 conference mark into the final week of the regular season. Elmont has won five straight matches since the setback, including a come-from-behind 15-25, 25-21, 25-20, 25-23 decision at Manhasset on Oct. 18.
“We showed a lot of character against Manhasset,” Straub said. “We lost the first set and trailed 7-0 to start the second set.”