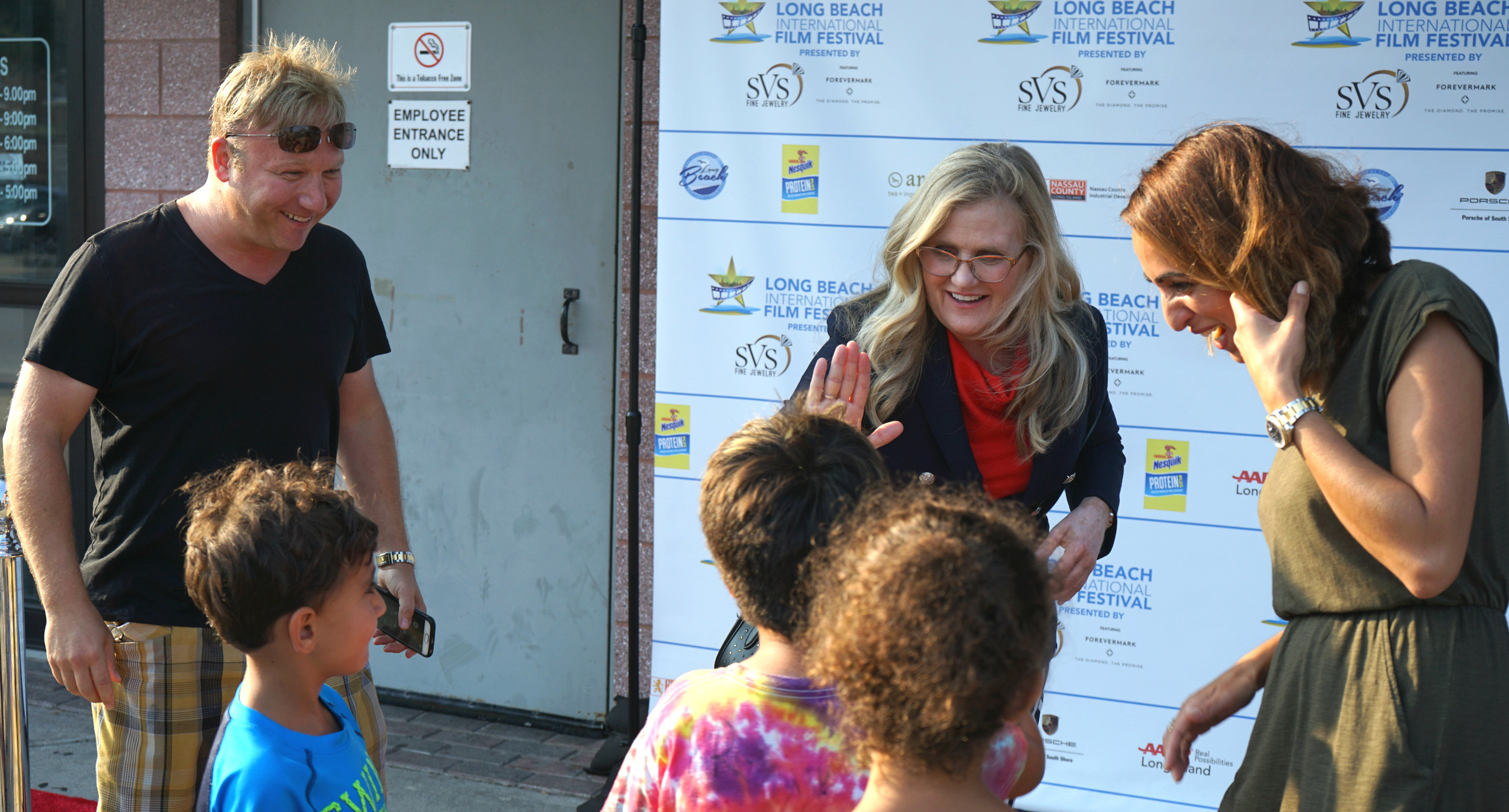 Actor Nancy Cartwright, center, the voice of Bart Simpson in the animated television series “The Simpsons,” greeted fans on Aug. 1, the opening night of the sixth annual Long Beach International Film Festival, at the premiere of a film she produced, “In Search of Fellini.” Story, more photos, Page 9.
Peter Belfiore/Herald 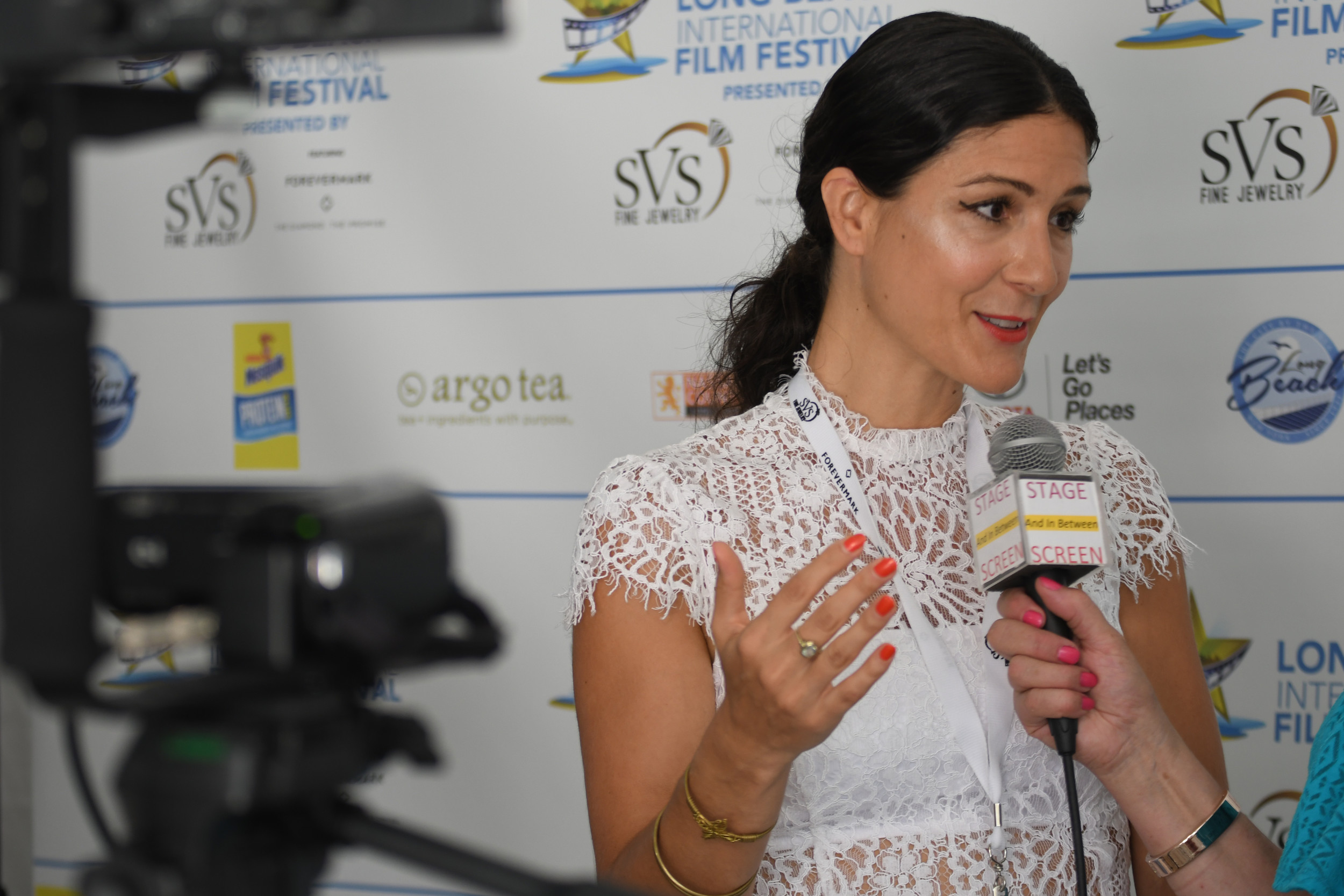 Filmmaker Karola Raimond was interviewed on the red carpet at the Long Beach International Film Festival on Aug. 4 about her film "The Cuddler."
Andrew Vardakis/Herald 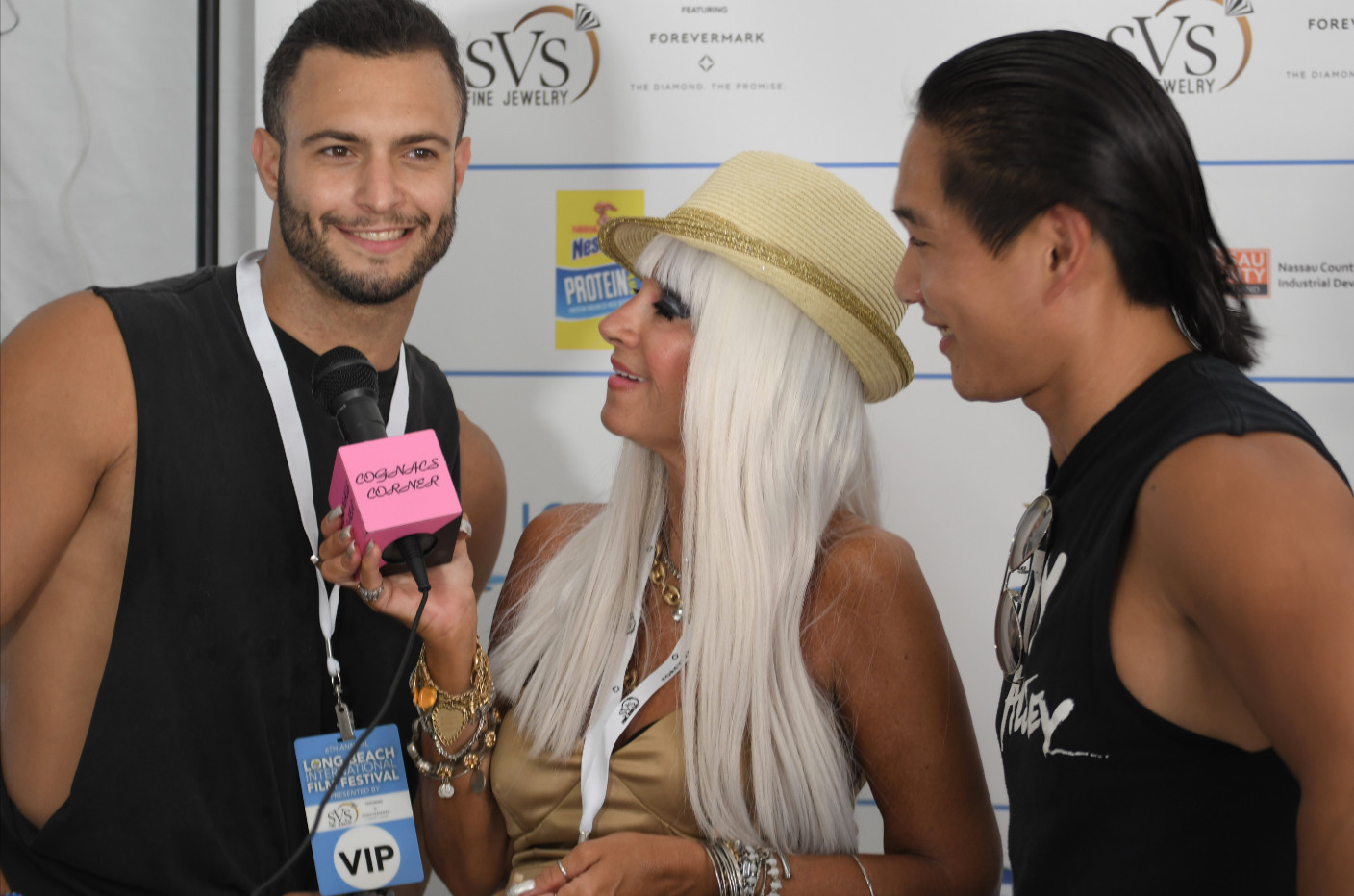 Joseph Dominic, left, and Matt Cusack, of the band “City Alley,” performed at the festival on Aug. 4 and were interviewed on the red carpet by Cognac Wellerlane of Cognac’s Corner Magazine.
Andrew Vardakis/Herald 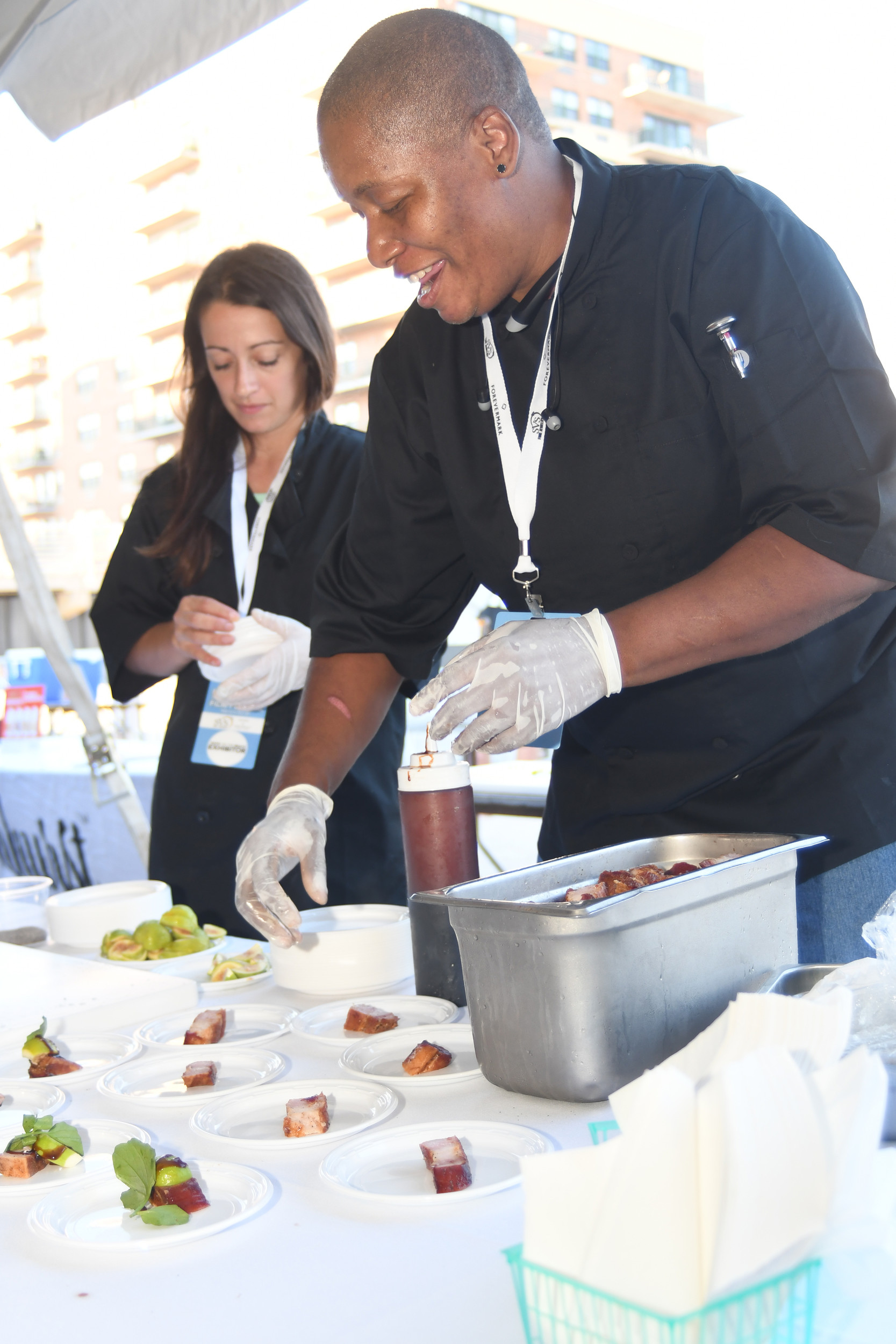 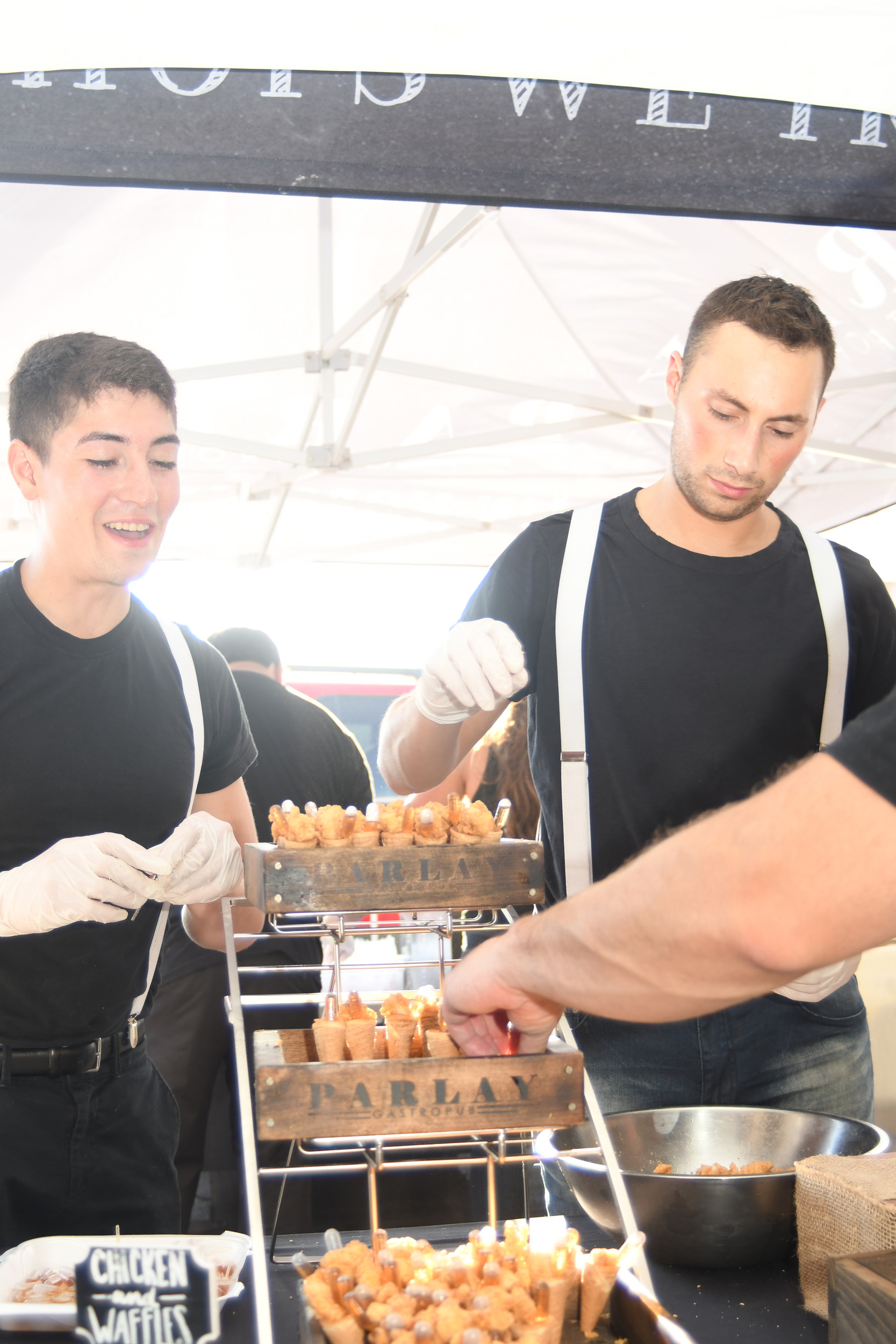 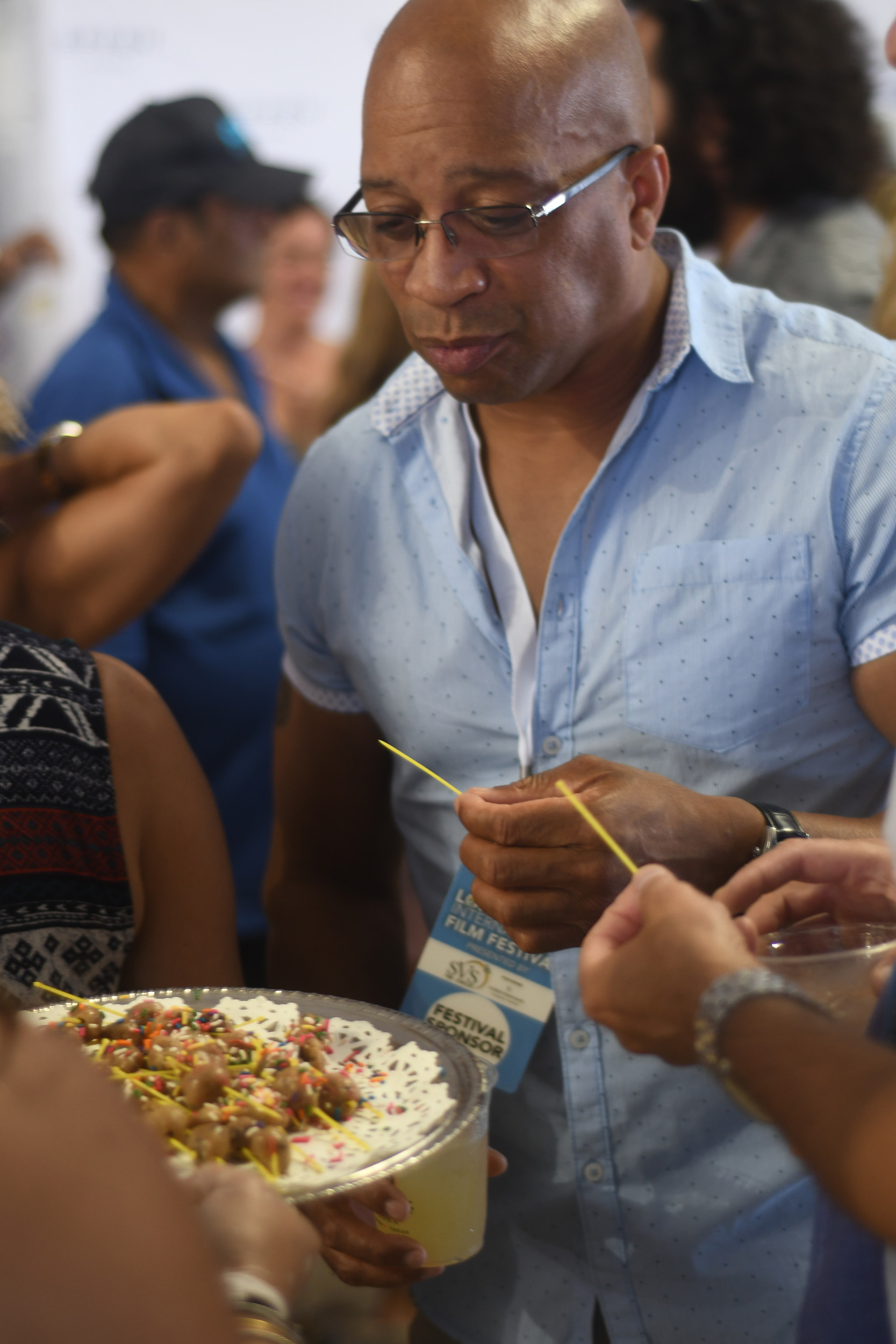 Ray Thomas, a film festival board member and representative of the charity Pink Tie, sampled edible cookie batter by Batter Up of Bellmore on Aug. 4.
Andrew Vardakis/Herald
Previous Next
By Bridget Downes

Between appearances by the voice of Bart Simpson, actor Nancy Cartwright, red carpet interviews with actors and filmmakers, and local chefs displaying their best dishes, there was no shortage of festivities during the 6th annual Long Beach International Film Festival this year.

The event ran from Aug. 1 to 4 outside the Allegria Hotel on National Boulevard, an each night offered guests something different. On opening night, Cartwright, best known for her role as the voice of Bart Simpson in “The Simpsons,” visited the Long Beach Public Library to premiere her film, “In Search of Fellini,” which she wrote and produced.

The film — which will be released on the east coast in September — is about a small-town girl from Ohio, much like Cartwright herself, who discovers the bizarre films of Italian filmmaker Federico Fellini and goes on a journey across Italy to find him. It recounts Cartwright’s personal experiences travelling around Italy.

“I went off on this adventure and I had a wild time,” Cartwright said. “I ate, I drank, I fell in love — I was proposed to…”

Cece King, a New York-based actor, writer and producer, and producer Ramfis Myrthil, premiered their film “The Broken Ones” during the festival. “This is my first feature as a writer and as a lead, so I’m grateful to be here,” King said.

The popular Taste on the Beach, meanwhile, followed the red carpet premieres, and more than 50 vendors sampled their food and beverages to attendees.

“This is the third year we’ve done Taste on the Beach,” said festival co-founder Craig Weintraub. “We’re constantly trying to find the best restaurants, the best wineries, the best breweries, the best spirit companies, to come and serve and we’re also always trying to improve the environment they’re in.”

“It’s really nice to meet the locals of Long Beach and be surrounded by a lot of other great vendors, and just be a part of a nice night and get to showcase our food with everyone,” said Vincent Lopez of Parlay Gastropub in Rockville Centre.

“It’s always a lot of fun to come to events like this and see what the community is doing, and to have such a positive reaction to the food is really great,” said Jillian Leigh of LB Social.

“It’s spectacular,” said City Manager Jack Schnirman. “It’s like Hollywood right here in Long Beach on the beach. What more can anyone ask for? This is what the Long Beach life is all about.”