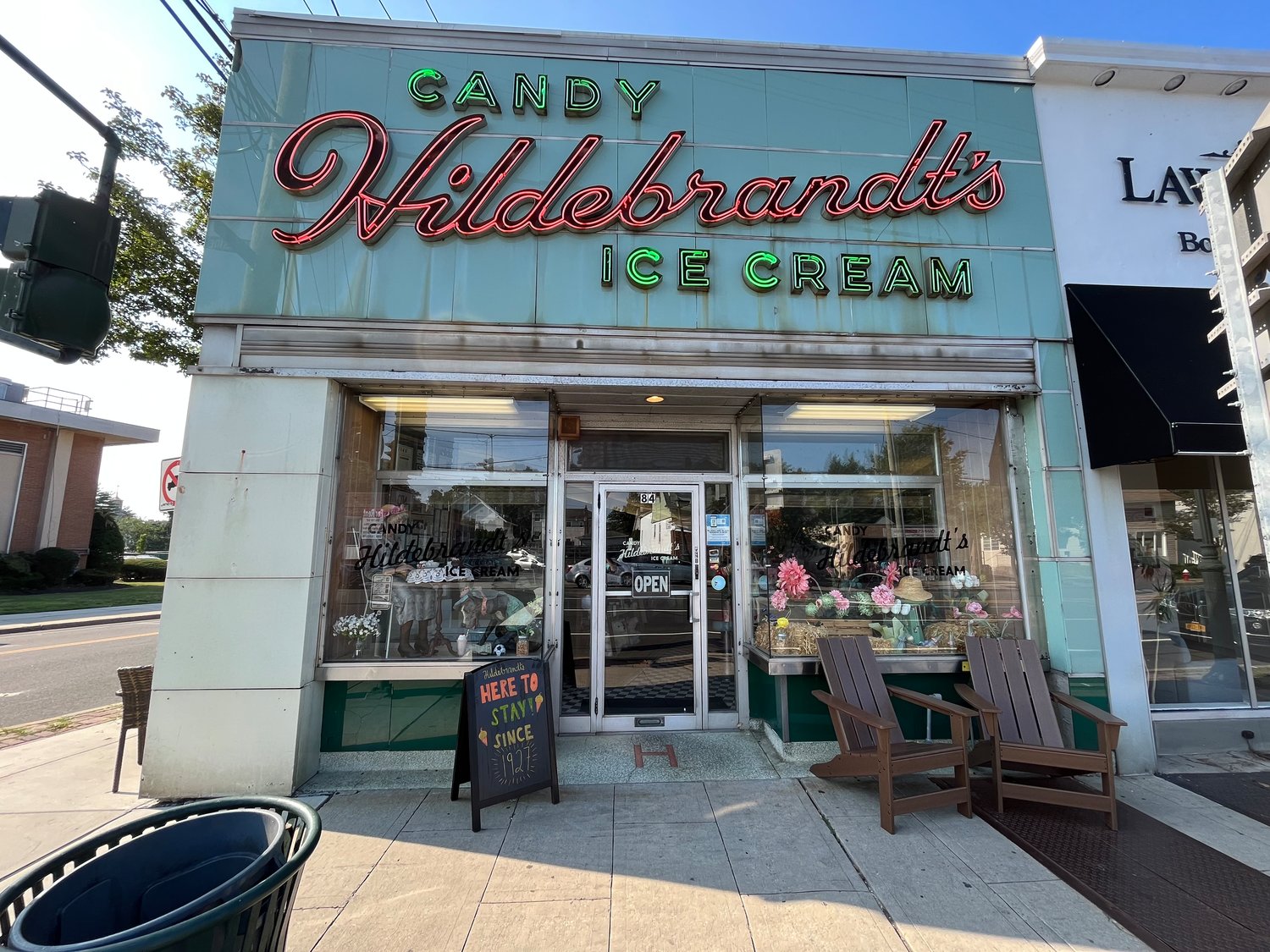 Hildebrandt’s has been a Williston Park — and Long Island — fixture since 1927.
Will Sheeline/Herald
By Will Sheeline

Hildebrandt’s, a classic 1920s- style soda, ice cream and candy shop and restaurant and an icon of Williston Park and Long Island, nearly closed its doors due to rising rents. Thanks to the efforts of Sea Cliff resident Spencer Singer and his cousin Randy Sarf of Great Neck, the iconic restaurant will continue to serve Long Island residents for at least another decade.
Founded in either 1927 or 1929, no one knows for sure, Hildebrandt’s had a steadfast commitment to being a business run by families, for families.
Originally owned by the Hildebrandts, it was sold in the 1950’s to the Alma family, who sold it to the Baum family in 1974. One of the Baum’s three daughters, Susan, bought it with her husband, Bryan Acosta, in 2007. On July 1 of this year, it switched hands once more, to Singer and Sarf.
Hildebrandt’s changed hands the last time in large part due to a rent increase. The Acosta family struggled to pay rent since 2020, when the building was acquired by a new owner who imposed a rent increase.
Singer, who moved from Manhattan to Sea Cliff at the beginning of the pandemic in 2020, said his previous work experience is in the world of fashion, specifically men’s apparel. However, when Sarf, who has worked in the restaurant industry as a consultant for struggling businesses for 35 years, approached him with the idea of buying the iconic old restaurant, Singer was hooked on the idea.


“When Randy approached me with the idea, you know, I really liked it. The project just felt right,” Singer explained. “I spent a lot of time at Hildebrandt’s, getting to know the staff and the people who go there, getting a feel for the place. I just felt that this is a great project.”
While Singer doesn’t have any direct restaurant experience, he claimed that part of his job in fashion involved hospitality, running events at nightclubs, bars and restaurants, so this wasn’t a giant leap from his previous work.
Sarf said this is a new step for them both, but they’re delighted by the opportunity to work at such an historic institution that has provided so much joy to both Williston Park and the greater Long Island community over the years. They plan to build on the hard work of the previous families who owned Hildebrandt’s.
“We have a very long-term lease and are looking to really expand this business beyond the actual restaurant,” Sarf asserted. “We want to expand the ice cream and the candy and the cakes and everything else that the Hildebrandt and other families have done for the last 97 years. So a lot of the items that they had to stop making because they ran out of money, we’re going to start making again.”
Singer and Sarf have a 10-year lease on the property, and secured the entire staff for at least a year while they adjust to the business. Many of the employees have been there for decades, including the manager, Ted Bauman.
Bauman, began working at Hildebrandt’s as a 15-year-old cashier and has worked at the restaurant since 1985. He and the new owners began planning some updates to the layout of Hildebrandt’s, without changing the interior and feel of the restaurant that so many customers have come to know and love over the decades.
Updates include moving the dishwasher and possibly the grill into the kitchen, rather than having them in the customer area, as well as potentially expanding the kitchen space. The changes will make it easier for the staff to provide customers with delicious food, ice cream and candies.
What won’t change, according to Bauman, is the sense that Hildebrandt’s is truly a family restaurant.
“One thing is a constant; it’s always been a family place,” Bauman said. “It’s always been run by a family for families. That’s the main thing that’s always held true for the whole time, even now.”
While Singer and Sarf have only been running Hildebrandt’s for a month, they plan to expand the business. Singer raised the possibility of opening a Hildebrandt’s ice cream store in Sea Cliff one day, so that residents of his own community can enjoy the restaurant’s iconic ice cream.
Report an inappropriate comment