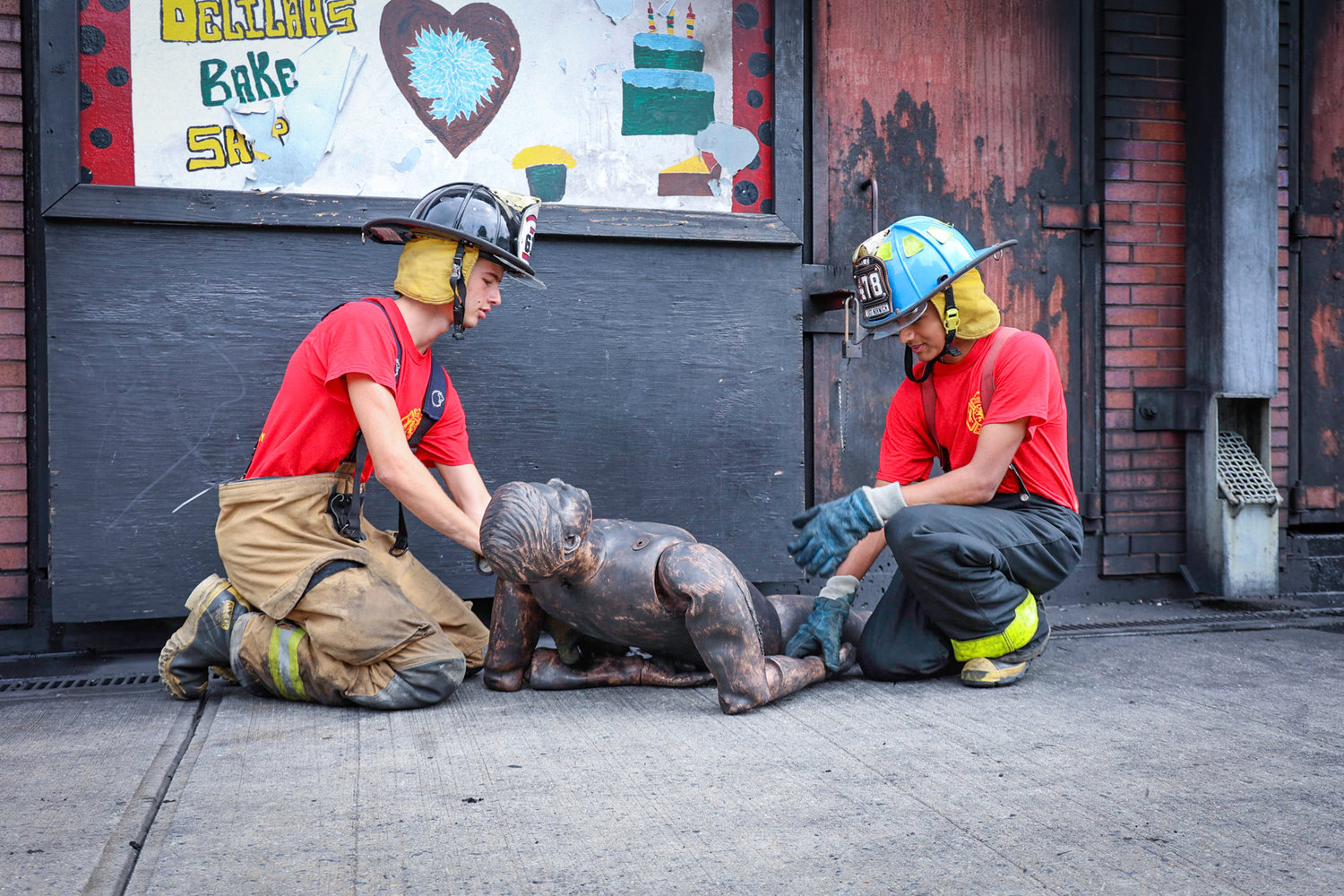 Junior Firefighters Nick Montoni, 17, from East Meadow and Omek Kumar, 15, from East Norwich use a dummy to learn how to assist a fire victim at the Nassau County Fire Service Academy in Bethpage.
Photos by Karen Millindorf/Herald 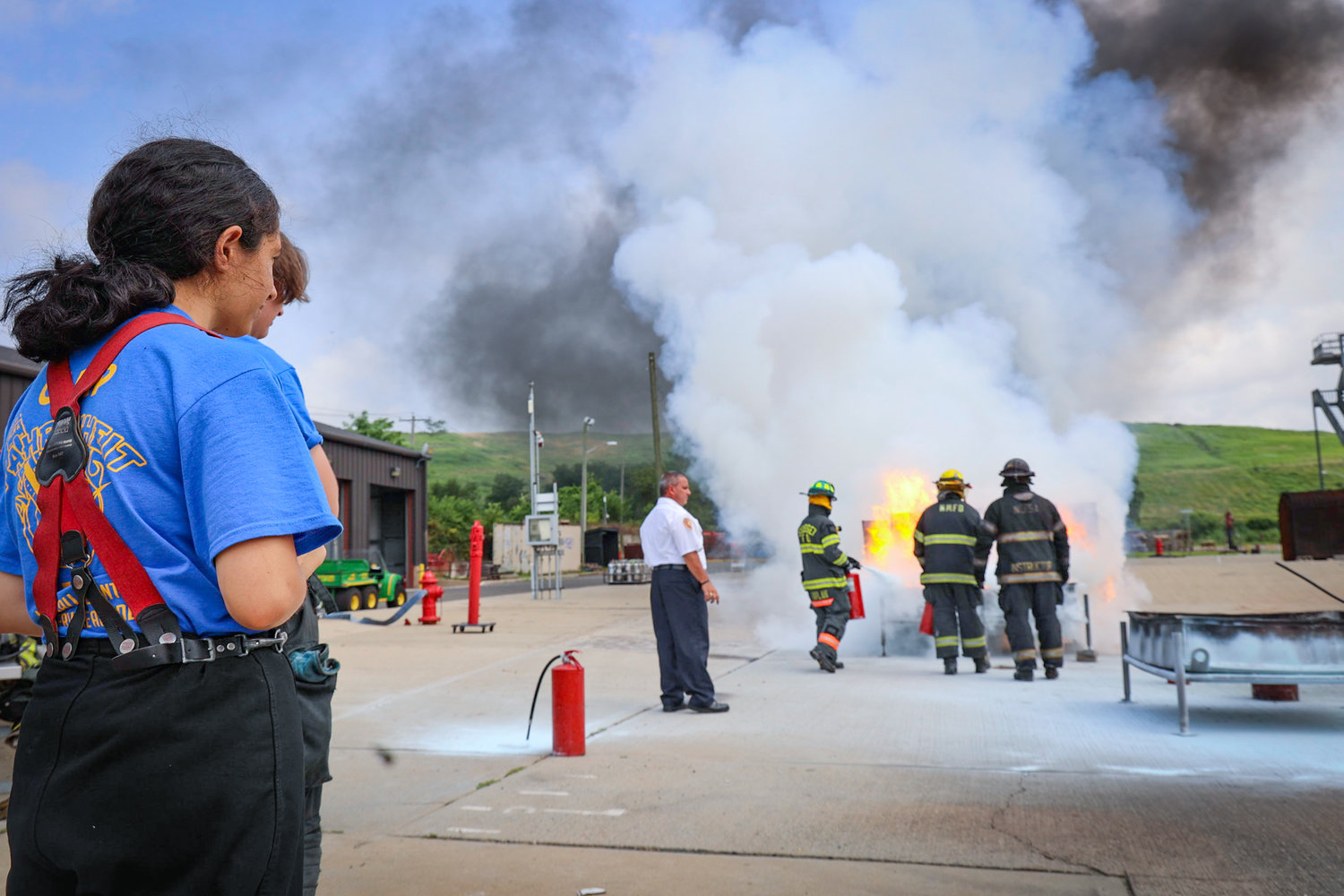 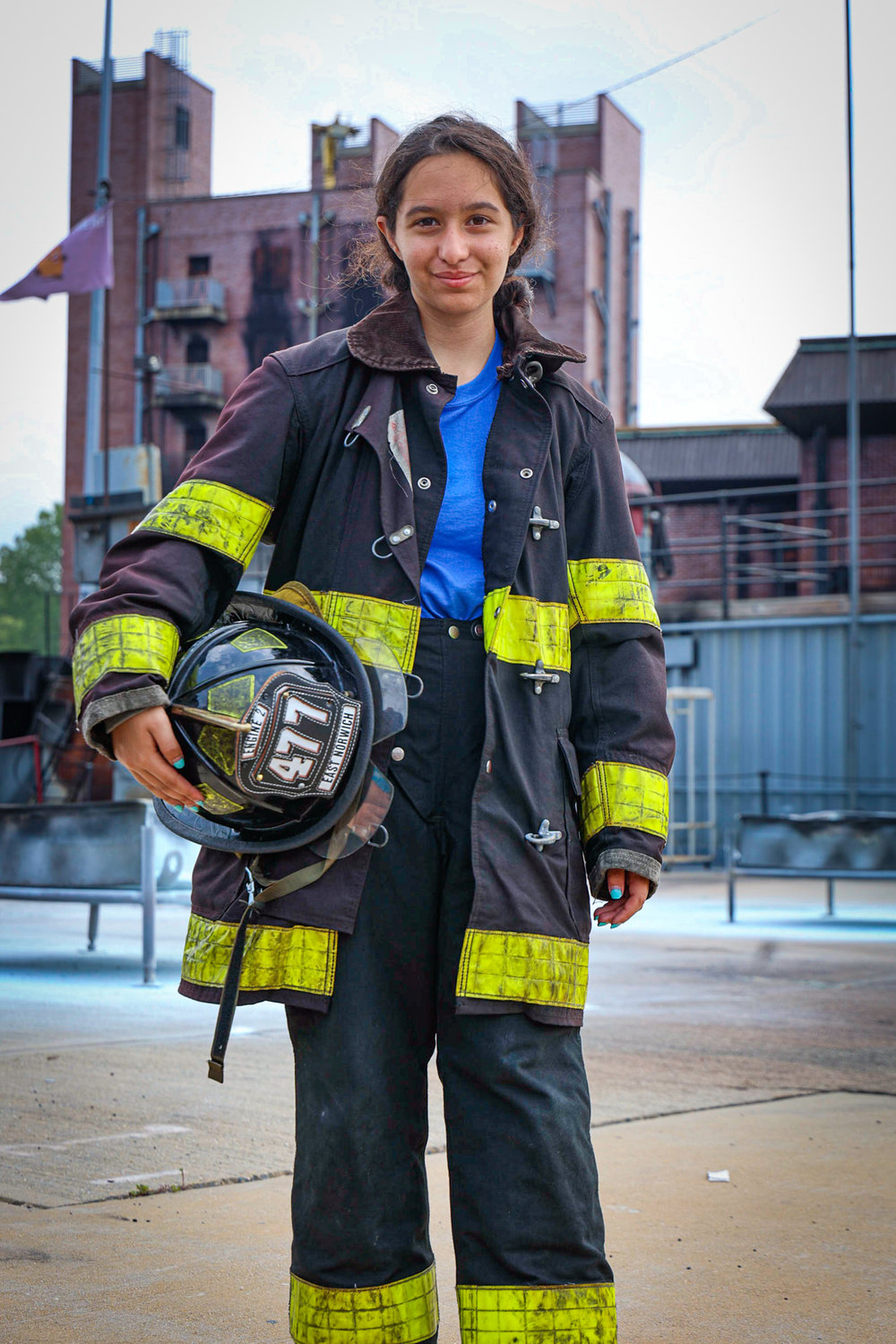 Khadeejah said she wanted to be a New York City firefighter someday.
Photos by Karen Millindorf/Herald
Previous Next
By Laura Lane

Khadeejah Memon is 14. Five feet tall and weighing 107 pounds, the East Norwich resident said she has her heart set on becoming a New York City firefighter.

She joined the East Norwich Fire Department juniors two years ago, after attending an assembly led by the firefighters at the James H. Vernon School. “It seemed like a really exciting thing to do,” Khadeejah said. “I always liked the idea of helping people, and to save lives would be amazing.”

Being a junior firefighter has been a great experience, she said, but attending Camp Fahrenheit 516, at the Nassau Fire Service Academy in Old Bethpage, has been even better. “We did live burns and cut up a car,” she said. “I can’t do that at juniors.”

Twenty-eight teens, ages 14 to 17, took part in the five-day camp July 26-31, a scaled-down version of the more intense two-week camp for probationary firefighters, which is also run by Nassau County fire instructors. The camp is 40 percent classroom learning and 60 percent hands-on training. Participants conduct drills on the last two days, including putting out a warehouse fire.

Omek Kumar joined the East Norwich F.D. juniors when he was 13. Now, at 15, he’s the treasurer, and said he enjoys learning new things, Being a junior satisfies his curiosity, he said, and so did attending the camp.

What surprised the Oyster Bay resident most at fire camp was how calm everyone was when they were in the burning building. “I learned how to work as a team when fighting a fire and how to stay together,” said Kumar, who plans to become an emergency medical technician and then attend nursing school. “This showed me how being in a real fire would feel.”

“The camp gives them the closest thing they will experience [to] being an actual probee firefighter, something no other junior organization has in the entire country,” said Jerry Presta, of East Norwich, chairman of the Nassau County Junior Firefighters Association. “When they go into these buildings to put a fire out, there’s no propane switch to turn off. This is the real deal here.”

No one has ever been hurt at the fire camp, Presta said, because participants are thoroughly prepared for the drills by the final day.

“This is a great recruiting tool,” said Robert Hughes, the chief fire instructor and a former East Meadow Fire Department chief. “The camp teaches the kids responsibility, safety and leadership, and they get other kids to join. A large majority who go to this camp go on to join the volunteer Fire Department, either as a firefighter or an [EMT].”

For some juniors, it’s a wake-up call. “We’ve had kids go to fire camp and decide this isn’t for them,” Presta said. “They can’t believe how hot it is, how close they are to the flames. I had one girl end up going to EMT school and then paramedic school. She probably would have dropped out of probee school and pushed the entire idea of the Fire Department away had she not gone to the camp.”

Seventeen-year-old Nick Montoni, of East Meadow, will major in fire science at Nassau Community College in Garden City this fall, and said he hoped to become a New York City firefighter one day. That’s why he enrolled this summer at Camp Fahrenheit 516.

Montoni joined the EMFD juniors at 14, eager to learn how to put out fires and save people’s lives. A friend told him about the “cool” experience he could have at the camp, and he said he learned a great deal there recently, including which fire extinguisher to use on different types of fires.

“It was hot,” Montoni said of the warehouse fire. “And once you put the water on it, you could see fire over your head. It’s hard to see in there because it’s very dark.”

He also learned how to put the heavy gear on properly, he said, and climbed a 22-foot ladder. The camp took him one step closer to becoming a firefighter. “I’ve always loved the idea of saving lives,” he said. “People aren’t mad at firefighters. They’re relieved to see them. In a sense, I get to be a hero.”