Life Enrichment Center brings vaccine to dozens of its seniors

Seniors relieved to get vaccine in familiar setting 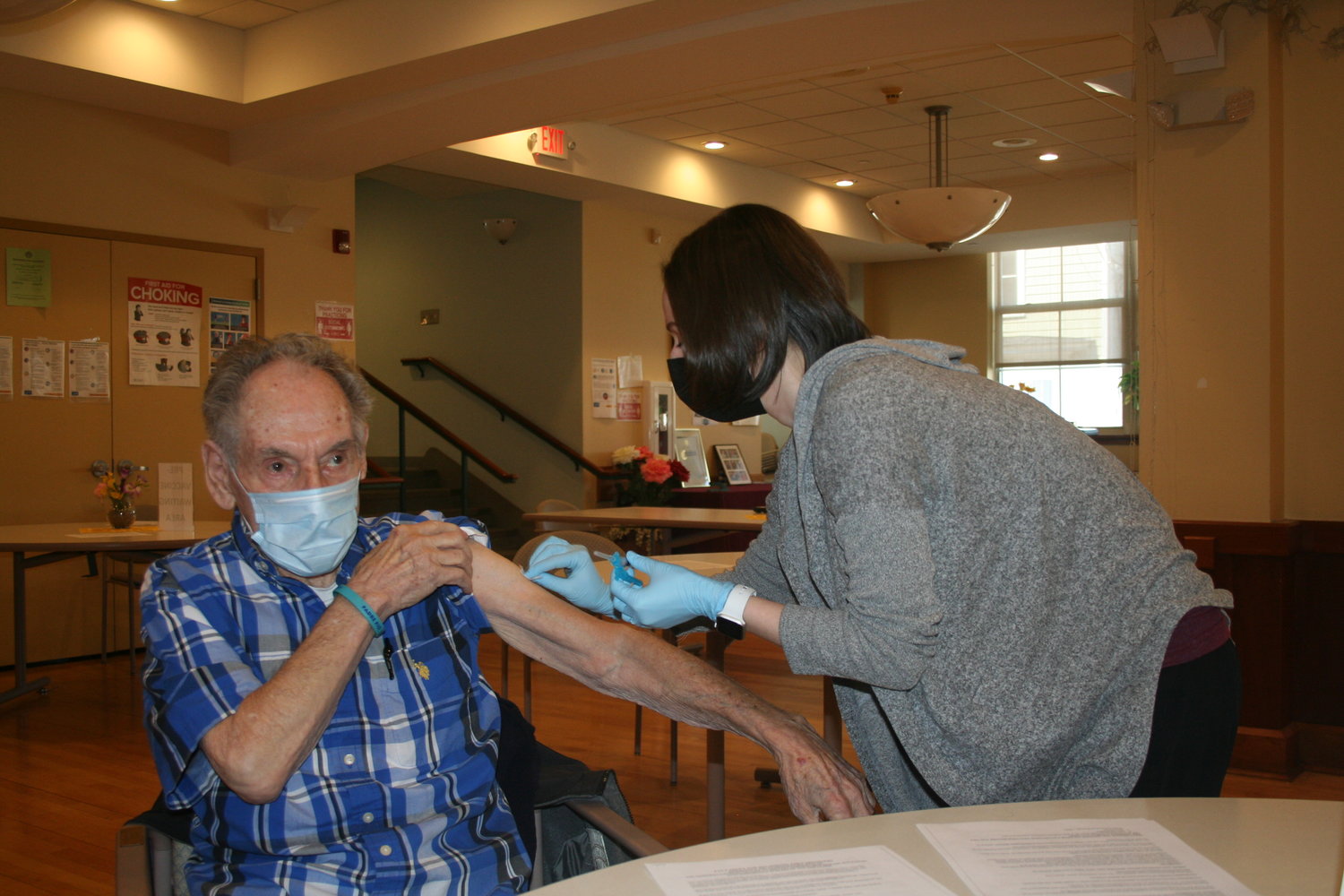 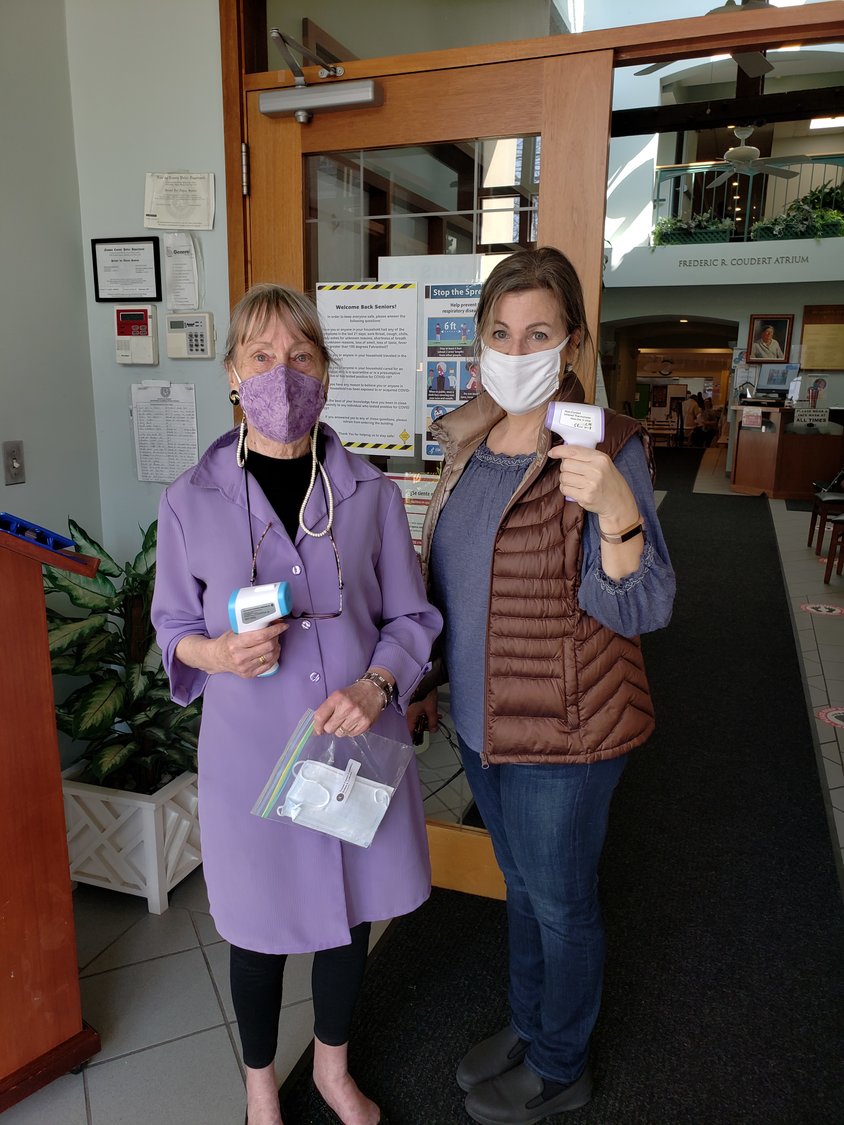 Volunteers Diane Aerne, left, and Susan Tucker were there to greet seniors and take their temperatures before they got the shots.
Courtesy Life Enrichment Center of Oyster Bay
Previous Next
By Mike Conn

The Life Enrichment Center of Oyster Bay partnered with Americare on March 11 to provide 70 of its seniors with the Covid-19 vaccine at the center. In took less than 30 minutes for seniors to complete the process, from the time they arrived until the end of their 15 minutes in the observation area, where they were monitored to be sure they didn’t have any side effects from the vaccine. Then they could walk out of the center with the comfort of knowing that they were one step closer to be protected from contacting Covid-19.

Bridget DeSimone, the coordinator of the center’s Day Break program, which works with members with dementia and Alzheimer’s, took the lead in bringing Americare to the center. She said the center had taken roughly 150 seniors to different vaccination sites since the inoculations became available. When she took a group of them to Americare’s vaccination center in Garden City, however, the company’s director of nursing and client services, Charlene Valentino, suggested that Americare come to the center.

This, DeSimone said, nearly brought her to tears. Oyster Bay is relatively remote from the rest of Long Island, she said, and many of the seniors have trouble leaving town. Having Americare come to them, she said, was a game-changer. That was especially true because many seniors were having trouble booking appointments to get the vaccine, and the center, which under normal circumstances would have helped them, had only been open briefly since last March.

DeSimone said she could hear how appreciative the seniors were when she called them to let them know the clinic was coming to the center. They were excited to be able to go somewhere local and familiar, she said, which made them feel safe.

“It was really important to us so that they could get back to their quote-unquote normalcy and safety,” she said. “For a lot of them, this is just such a relief.”

Valentino said she made the offer to DeSimone after seeing how many seniors the center still had to service. Although this was the first senior center Americare has serviced, it has had clinics in various Long Island locations. The company and those who run it, Valentino said, care deeply about their community and helping Long Islanders.

Valentino said she has seen the effects the pandemic has had on seniors in her 81-year-old mother. It has been difficult to watch her lose so much time that she could be spending enjoying herself, Valentino said, which has made her work at the center all the more fulfilling.

“The broken-heartedness of it is to watch seniors not enjoying their golden years,” Valentino said, “to watch the separation of families with grandchildren not seeing their grandparents. So this, to me, is the best thing we can all do for one another.”

Mary LaBella, 84, said it had been difficult for her to figure out how to get the vaccine. She was going to try to get a shot at Jacobi Hospital in the Bronx, she said, but traveling back and forth would be taxing, even with her son accompanying her. She lives within walking distance of the center, she said, so when she was told that the vaccine would be right next door, she was relieved.

“I was really thrilled, because I have seven children, and I had them all on the alert to find where I can go,” LaBella said. “We tried and tried and I finally got one [at Jacobi], but then all of a sudden, the next day, I got this call and I couldn’t believe it. It’s wonderful. We’re lucky in Oyster Bay to have this center.”

Judy Palumbo, the Life Enrichment Center’s executive director, said that everyone at the facility was excited about the vaccine clinic, and that its success made it even better. All the seniors want is to be able to spend time with their friends, she said, so bringing the vaccine to their doorstep was the best thing to do. She added that she hoped this would put the center  on the path to reopening.

“It’s just so rewarding,” Palumbo said. “It’s so good to see people back in the building. They’re so appreciative, and it’s so heartwarming.”