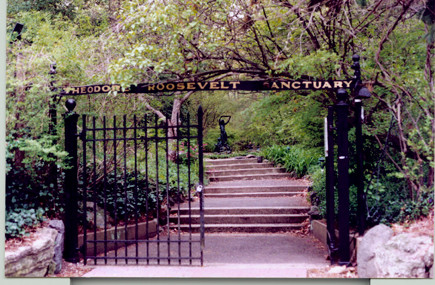 The Theodore Roosevelt Sanctuary and Audubon Center was donated to the New York state office of the Audubon Society by W. Emlen and Christine Roosevelt in 1923. They donated the property to memorialize their cousin Theodore Roosevelt, who is buried in Young’s Cemetery adjacent to the sanctuary.

But the center, beloved by children and bird watchers, has been showing its age of late. What would our former president think of Audubon New York’s planned renovations for the property that has served for so many years as a protected environment for songbirds? He would probably say, “Bully!”

The effort to “reimagine” the nation’s first Audubon songbird sanctuary — which hosts a bevy of birds, including red-tailed hawks, belted kingfishers and great egrets — began four years ago. “They challenged us to reimagine the center, not because it isn’t fantastic, but because it needs some improvements,” explained Erin Crotty, Audubon New York’s executive director.

The majority of the project will cost just under $1 million. Audubon currently has $400,000, which includes a grant for up to $130,000 from the Empire State Development Corporation under the Long Island Regional Economic Development Council Initiative. Individuals have also made donations.

Long Island’s ecosystem is important for migrating birds, Crotty explained, and some are becoming endangered. “The center in Oyster Bay is the cornerstone of Audubon’s work,” she said. “We plan to make it a state-of-the-art facility for the community, with educational programs and recreation opportunities.”

And the project will also benefit our feathered friends, which Audubon has predicted will increase in numbers throughout the sanctuary’s 12 acres of woods.

The project will include the addition of a bird blind — a wooden platform where visitors can observe the birds in their native habitat without disturbing them — and a brush pile, which will provide birds with shelter and protection. Crotty said the two areas would assist the sanctuary’s various educational programs by providing instructors an opportunity to share information about the birds that visitors can see firsthand instead of using slides and photographs.

“We will trim the forest canopy, where there is very little sunlight, and clean up the trails and plant native species, too,” Crotty added. “And we will also remove the visitor center.”

Many of the sanctuary’s programs are now held in the visitor center. Audubon hopes to replace it with a white house that is on a different part of the property, where past sanctuary superintendents have lived. The house, which is empty now, could be used for office space, include restrooms for visitors and, with a little work, serve as a location for programs. “We hope to add a multi-use room in the extension that we’d like to add to the back of the house,” said Crotty, pointing to the rear of the house, which faces Cove Road. “We’d also have live animals there.”

The house is not included in the nearly $1 million estimate that Audubon has released for the renovations. Crotty said it was too soon to say how much more the “adoptive reuse of the white house” would cost.

One of the most striking renovations is planned for the entrance to the sanctuary. Right now, a sidewalk close to Cove Road leads to a set of iron gates.

“We are right on top of Cove Road,” Crotty said. “Our plans are to open up the area, creating a 30-foot by 30-foot plaza [at the entrance]. Then a serpentine walkway would lead to the [Bessie Potter Vonnoh Memorial Bird] fountain.”

The fountain area has always been a favorite spot, but in recent years it has become run-down, and the fountain itself is not working. Vonnoh, a turn-of-the-century artist, was commissioned to create a sculpture to honor Roosevelt, which stands in the middle of the fountain. In 1927 she witnessed the installation of her sculpture in the fountain, which at the time was called the Theodore Roosevelt Memorial Bird Fountain.

The planned renovations include the complete restoration of the fountain. And there are plans to make the nearby areas even nicer.

“We would utilize the concept of secret gardens — one would be around every corner — of native plant species,” Crotty explained. “We’d also have shade and butterfly gardens, which attract birds. The landscape will be beautiful, and people will be able to see the sculpture from the roadway.”

The plans also include block seating near the fountain to encourage people to gather for reflection, and programs will be held there as well.

“We want to enhance the magical sanctuary feeling that’s already here,” Crotty said. “You feel it when you walk through our gates.”

After the renovations are complete, the trails, which will include native plants, will begin where the visitor center is now. Crotty said that Audubon is considering creating a loop so visitors can exit the sanctuary by way of a trail. Another idea being considered is the creation of a direct route to Young’s Cemetery, to the area where Roosevelt’s grave is located.

Currently, Audubon is in the processing of submitting the required permit applications to Nassau County and the Village of Oyster Bay Cove. It hopes to get the site plans approved by the end of the summer, and there are plans to continue to fundraise. “We will be working with the community to get more funds,” Crotty said. “But if we don’t have all of the funding once we get the approval to move forward, we can do the project in phases. This summer we are open.”