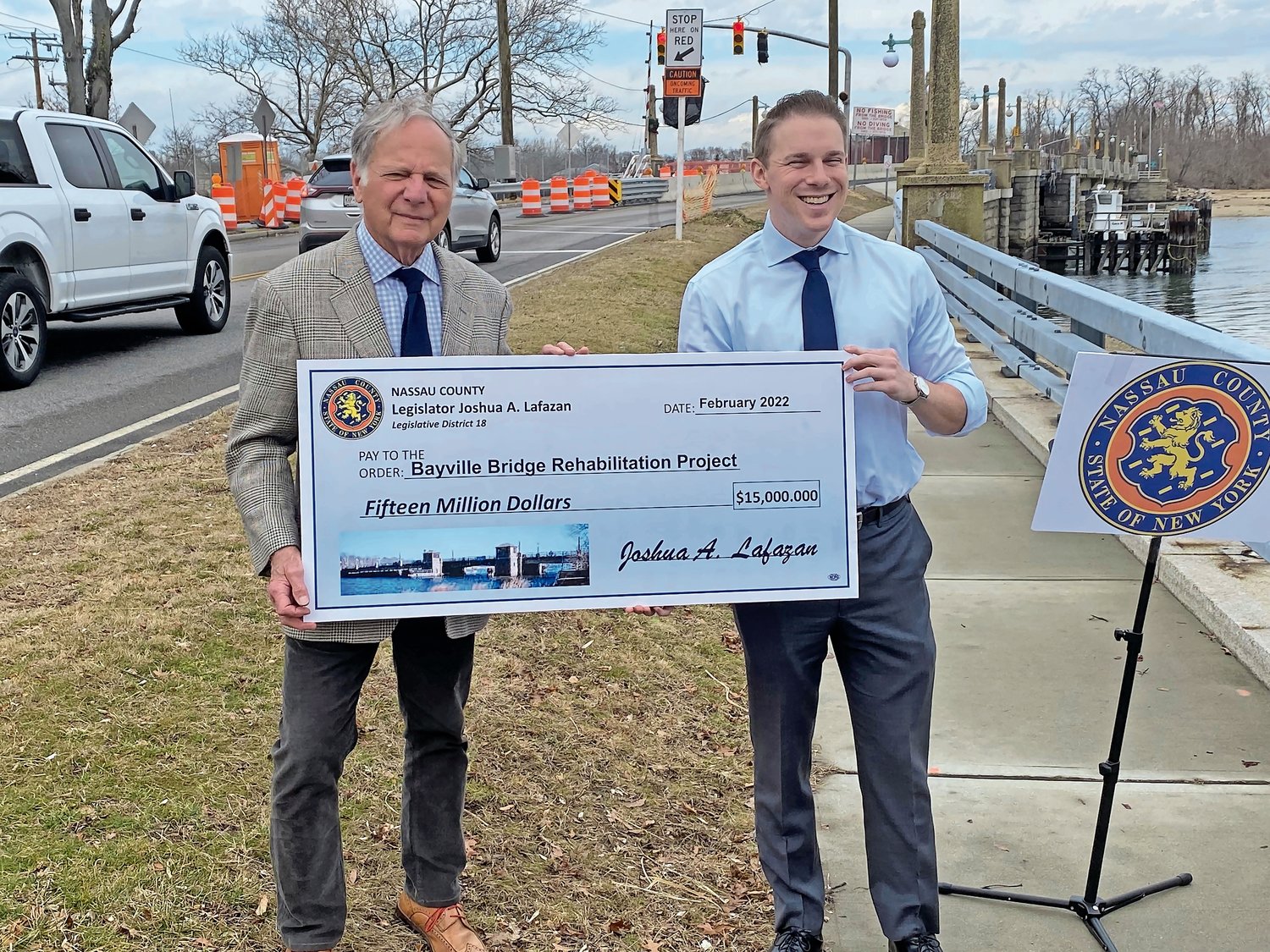 The village of Bayville supports the ongoing studies to maintain the structural integrity of the bridges and overpasses throughout the county.”
Bob De Natale, Bayville mayor
By Will Sheeline

Lines of vehicles routinely waited at the entrance of the Bayville Bridge. The two-lane bridge has been reduced to a single lane, with a stoplight directing alternate passage. As construction, which began in February 2020, continues on the 84-year-old structure, more funding is needed to finish it.

Nassau County Legislator Josh Lafazan held a news conference on Wednesday to announce that he had acquired $15 million in county funding to help the project move forward.

Lafazan, who represents the 18th Legislative District, which includes Bayville, also called on the county Department of Public Works to develop an infrastructure report card, which would be the first of its kind for Nassau.

The bridge, which connects the villages of Mill Neck and Bayville, has been in desperate need of rehabilitation for some time. Built in 1938, it was badly damaged when Superstorm Sandy swept across Long Island in October 2012. Although repairs were undertaken then to make the bridge serviceable, they did little to address its less immediate needs, which include updating its approach and bascule spans — which allow the bridge to open — converting it from a manual to a fully automated lift system, and other necessary upgrades.

The bridge’s problems were made clear on the July Fourth weekend in 2017, when it was stuck in the open position a number of times, sometimes for as long as six hours. This brought traffic — and with it, tourism and business in Bayville — to a standstill, and led to the initiation of the rehabilitation project.

Lafazan highlighted the importance of repairs, especially after the damage done by Sandy, amid general long-term degradation of the bridge. He didn’t stop there, however, touching on other infrastructure issues throughout the county. He mentioned the collapse of Pittsburgh’s Frick Park Bridge in January, in which 10 people were injured, and said, “This was a major wakeup call with regards to infrastructure throughout the country, and for me personally as a lawmaker in Nassau County.”

Lafazan called on the county Department of Public Works to publish an infrastructure report card. “This report card would address the current state of Nassau’s infrastructure, to best guide legislators on where investments need to be made,” he explained, “and help educate the public on where the infrastructure in their community stands.”

He also asked the county to set up a website to map its infrastructure, and to grade it, similar to a project undertaken by the American Society of Civil Engineers. Calling on the county to be proactive rather than reactive, Lafazan claimed that doing so would help it avoid public infrastructure disasters like Pittsburgh’s and improve Nassau residents’ lives.

“The village of Bayville supports the ongoing studies to maintain the structural integrity of the bridges and overpasses throughout the county,” De Natale said. “We are especially pleased with the revitalization of Bayville Bridge, and the efforts on our behalf of Legislator Lafazan.”

Lafazan presented De Natale with a facsimile check from the county for $15 million. To acquire the money, Lafazan said, he impressed upon his colleagues in the Legislature the economic and civic importance of upgrading the bridge for both the village and the county.

Lafazan, who is running to succeed U.S. Rep. Tom Suozzi in the state’s 13th congressional district, said he would prioritize the county’s infrastructure needs if elected, and pledged that the Bayville Bridge would be completed on time — by July 1, 2023 — and on budget.