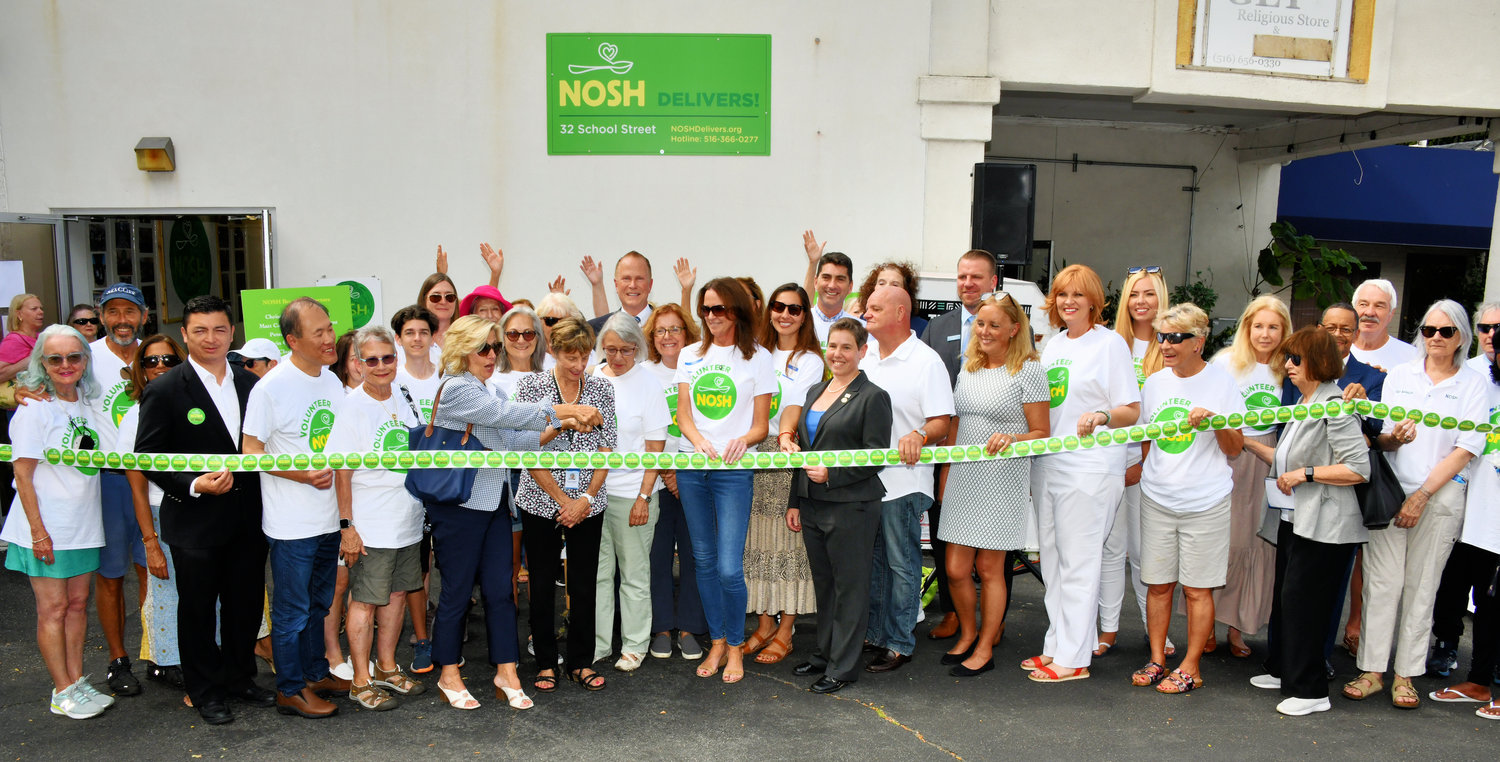 The ribbon-cutting ceremony outside the entrance of NOSH’s new headquarters on 32 School St. was attended by many residents, volunteers and officials who came to show their support to NOSH’s new location.
Tab Hauser/Herald

The fact that this is a permeant structure, and a permeant hold is really an indication that the need is still there.”
Delia DeRiggi Whitton, Nassau County legislator
By Roksana Amid

NOSH, which lost its home due to a fire in August 2021, has finally found a new space at 32 School St. in Glen Cove. A subset of the North Shore Soup Kitchen, NOSH serves the surrounding communities by providing emergency food delivery to individuals and families in need. Its new location was made official with a ribbon cutting ceremony on Aug. 31, with much fanfare as residents, elected leaders and NOSH volunteers came to show their support for the organization’s new home.
The new location is a former art studio owned by Peter Holdman, the owner of God Loves You in downtown Glen Cove. After meeting with three commercial businesses that were interested in the space, Holdman said he turned down the prospective renters when he heard that NOSH was interested. Holdman said that the three prospective businesses made good offers for the space but renting to anyone other than NOSH didn’t feel right to him. “We felt immediately this is what God wants,” he said.
NOSH was founded in March of 2020 to meet the increased need for food assistance created by the Covid-19 pandemic. It is staffed by volunteers who each week deliver free emergency NOSH bags, which include groceries to prepare meals for north shore families in need of food assistance. The food NOSH distributes is mainly donated by Long Island businesses, charities and residents.
The fire at Veterans and Foreign Wars Post 347, where NOSH was located, resulted in the total loss of its freezing and refrigeration equipment, as well as its inventory of thousands of pounds of food-enough to feed its client base for three months. The fire destroyed 23 refrigerators and freezers full of meat and produce, in addition to thousands of pounds of dry goods. About 100 firefighters from Glen Cove and six other departments responded to the blaze. The fire left the non-profit organization scrambling to find ways to continue serving the 500 plus families in Bayville, Glen Cove, Locust Valley, Roslyn, and Sea Cliff who rely on weekly grocery deliveries.
Those entering NOSH’s new permanent home will be met with a large logo, painted by volunteers from Island Harvest in 2021. According to NOSH cofounder Courtney Callahan, the large plywood logo is symbolic of the nonprofit’s resilience. It’s the only piece of memorabilia that survived the fire from 2021. The portable logo is now a fixture within the new studio space as part of an art installation commemorating its beginnings and present state. The installation also features a collage of pictures serving as the organization’s historical timeline.


“The community needed us, and we just stayed strong,” said Callahan. When reflecting on the fire and hardships the organization faced while finding temporary spaces, Callahan added that the worst day at NOSH is the best day at NOSH because they always learned from their experiences.
Though NOSH received help from local businesses and churches for temporary locations, the new permeant home on School Street permits the organization to welcome additional walk-in clients. As compared with clients on free delivery service, walk-in clients have the opportunity to pick items from NOSH’s food pantry, thus customizing their meals. Nosh co-founder Christine Rice, the director of the Glen Cove Senior Center, said that the permeant space will allow the organization to expand volunteer hours outside regular operating hours to youth who are interested. Having a permeant space will allow for NOSH to operate separately from the North Shore Soup Kitchen in the future, Rice added.
Callahan said organizations like NOSH use European countries as a bellwether to look for indicators of economic trends, which is leading them to prepare for even more critical levels of hunger. NOSH has followed the economic impact of the 7-month war in Ukraine since the country is a major producer of commodities, such as wheat, corn, and sunflower oil. These commodities are being restricted due to Russia’s invasion of Ukraine and contribute to higher food prices as costs are passed onto consumers.
According to trends that NOSH follows, in its worst-case scenario the United Nations estimates global food prices could jump another 8.5 percent by 2027.
When speaking about NOSH’s new permeant space, Nassau County Legislator Delia DeRiggi-Whitton said, “The fact that this is a permeant structure, and a permeant hold is really an indication that the need is still there.”
Report an inappropriate comment