Forced to go out of network; bills have ballooned 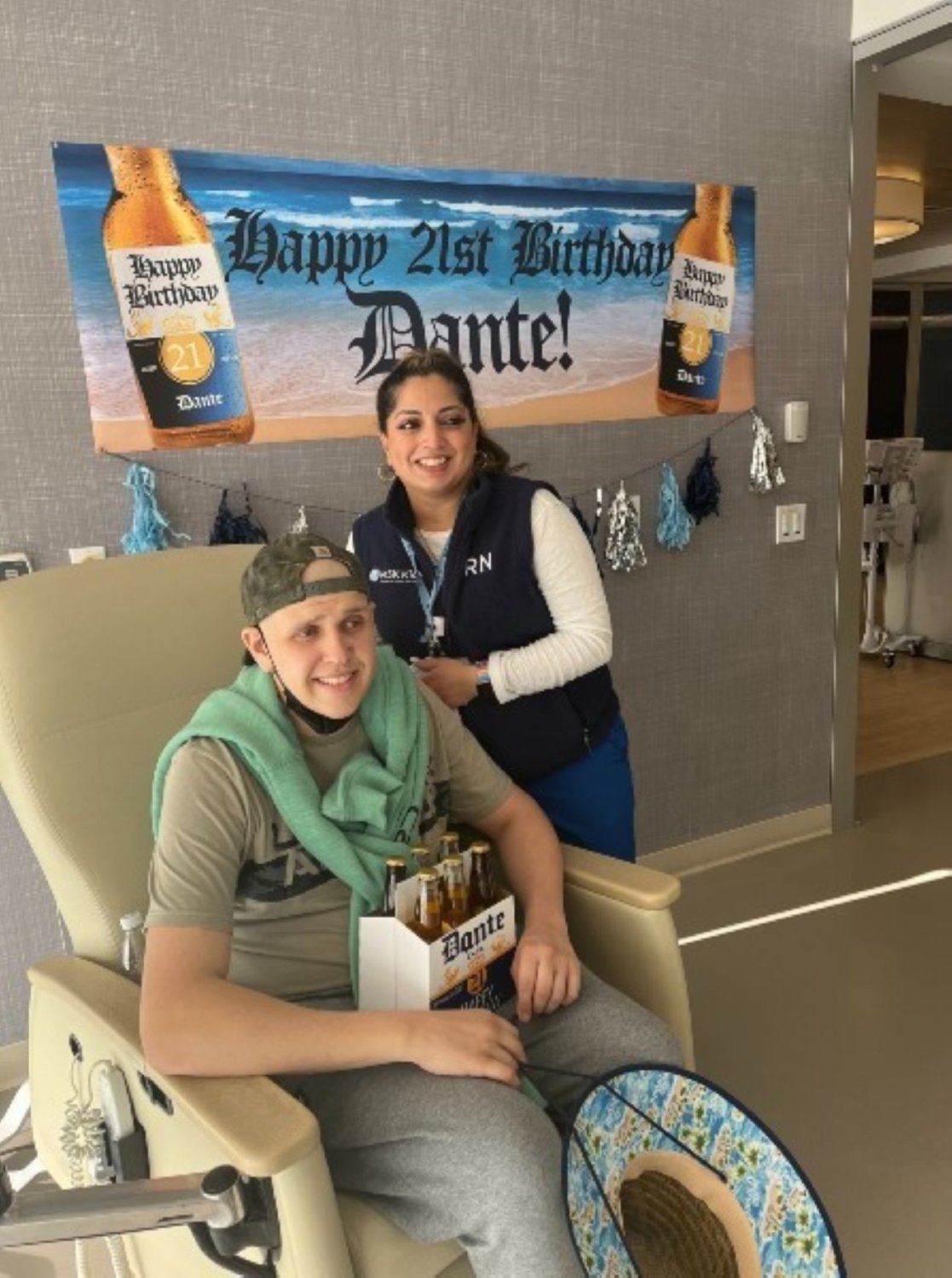 Dante Martorella, shown here with his nurse, celebrated his 21st birthday with a case of Corona in the hospital with his family.
Courtesy rallyhope.com 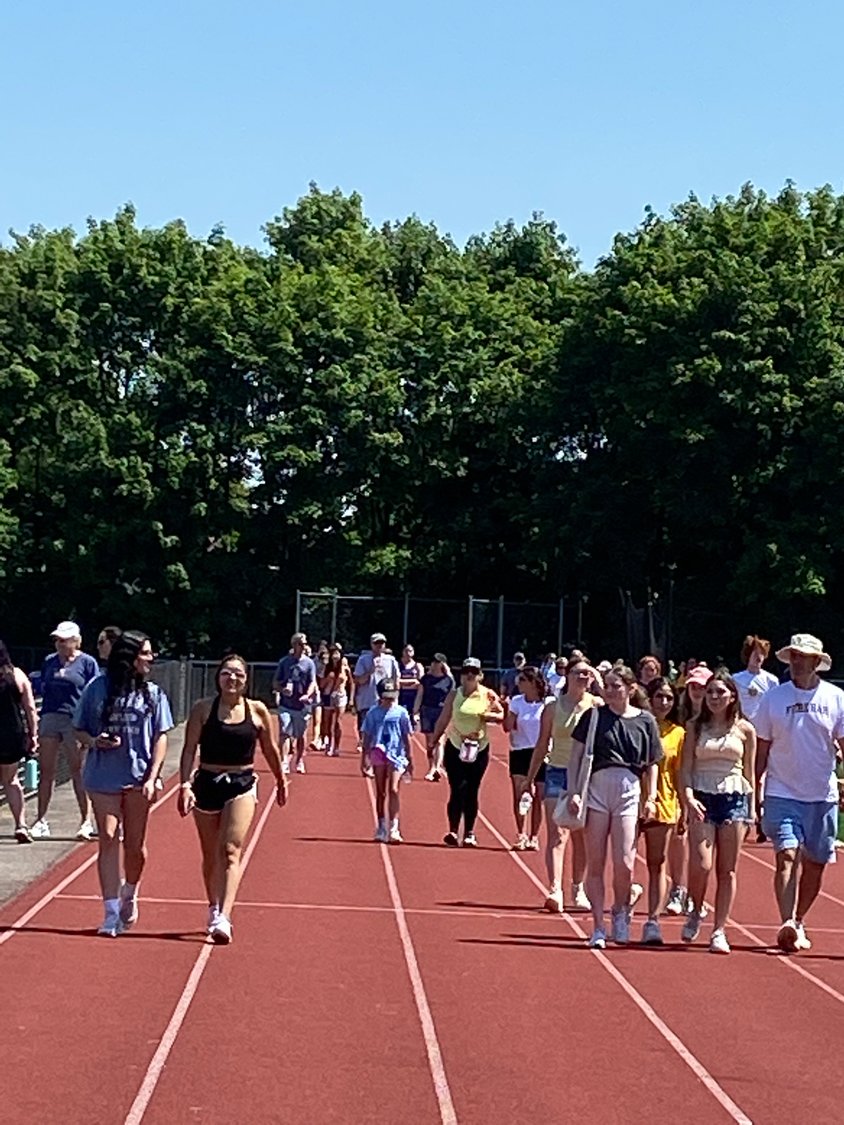 More than 100 people gathered to support the Martorella family when they took part in a walk on June 4 to raise funds.
Courtesy Dannie Taylor
Previous Next
By Will Sheeline

Rhabdomyosarcoma is a term few people know, and even fewer can pronounce. But for the Martorella family of Oyster Bay, the word has become all too familiar.

Tricia and Damien Martorella’s oldest child and only son, Dante, 21, a graduate of Oyster Bay High School, was diagnosed with the disorder, a rare cancer that forms in soft tissue, last August. It affects skeletal muscle tissue and sometimes hollow organs, such as the bladder or uterus.

Dante has been undergoing chemotherapy, radiation and other treatments, primarily at Memorial Sloan Kettering, a cancer treatment and research institution in Manhattan. Theresa Kelly, a nurse at St. Francis Hospital and a close friend of the Martorellas, said that despite all that Dante has had to face, he has remained stalwart in fighting the disease.

“He’s a hard worker,” Kelly said. “He repairs boats in Cold Spring Harbor. He loves cooking and the Food Network. He’s still fighting. He’s not ready to give up yet.”

Dante’s mother, Tricia, is a nurse who works three jobs to support her family of six. She has worked in a number of hospitals over the past 20 years, and is now a nursing supervisor at St. Francis and Mt. Sinai South Nassau and a hospice nurse for Good Shepherd.

Oyster Bay Town Councilwoman Vicki Walsh got to know Tricia when she was caring for Walsh’s parents. “For so many of us who live in this community, when our parents were dying or just getting out of the hospital, Tricia was the one who went home with them and took care of them,” Walsh said. “She always has been very, very involved in the community. She taught religion with me at Saint Dominic’s. She’s just a wonderful person.”

The Martorella family is facing mounting medical bills, and Tricia’s husband, Damien, is unemployed. She also has three younger daughters to care for — Alessandra, 19, Stefania, 17, and Cristiana, who will turn 15 next week.

Kelly claims that most of the family’s bills have not been covered by their insurance, because the oncologist included in their plan doesn’t treat rhabdomyosarcoma, forcing them to go out of network and creating enormous financial stress.

“Tricia’s working three jobs, and you know she’s trying to work as much as she can because she’s afraid she won’t be able to pay her bills,” Kelly said. “Plus, she has to use her vacation time to take Dante back and forth to see his doctor in Manhattan, so she’s still missed a lot of work.”

Community members have made some efforts to help support the family. On June 4, there was a community walk at James H. Vernon School, in East Norwich, to help raise awareness of Dante’s condition and raise money to help the family. Those who donated got to walk the school’s track on a sunny day, and enjoyed food and live music. The event raised nearly $11,000.

“The community just came out and donated and helped so much to make this happen,” said Dannie Taylor, of Oyster Bay, one of the organizers. “It was amazing to see how many people came, especially because the family is going to need our help.”

Taylor is also a co-founder of the YOLO Strong Foundation, a nonprofit founded in 2012 that raises money for the medically fragile, the terminally ill and special-needs children with events like marathons and obstacle course races.

Although the foundation was not involved in the walk, Taylor said that it planned to work with the Martorellas to help them address their rising medical bills. She encouraged anyone who is interested in helping the family to donate through Dante’s foundation, at rallyhope.com.