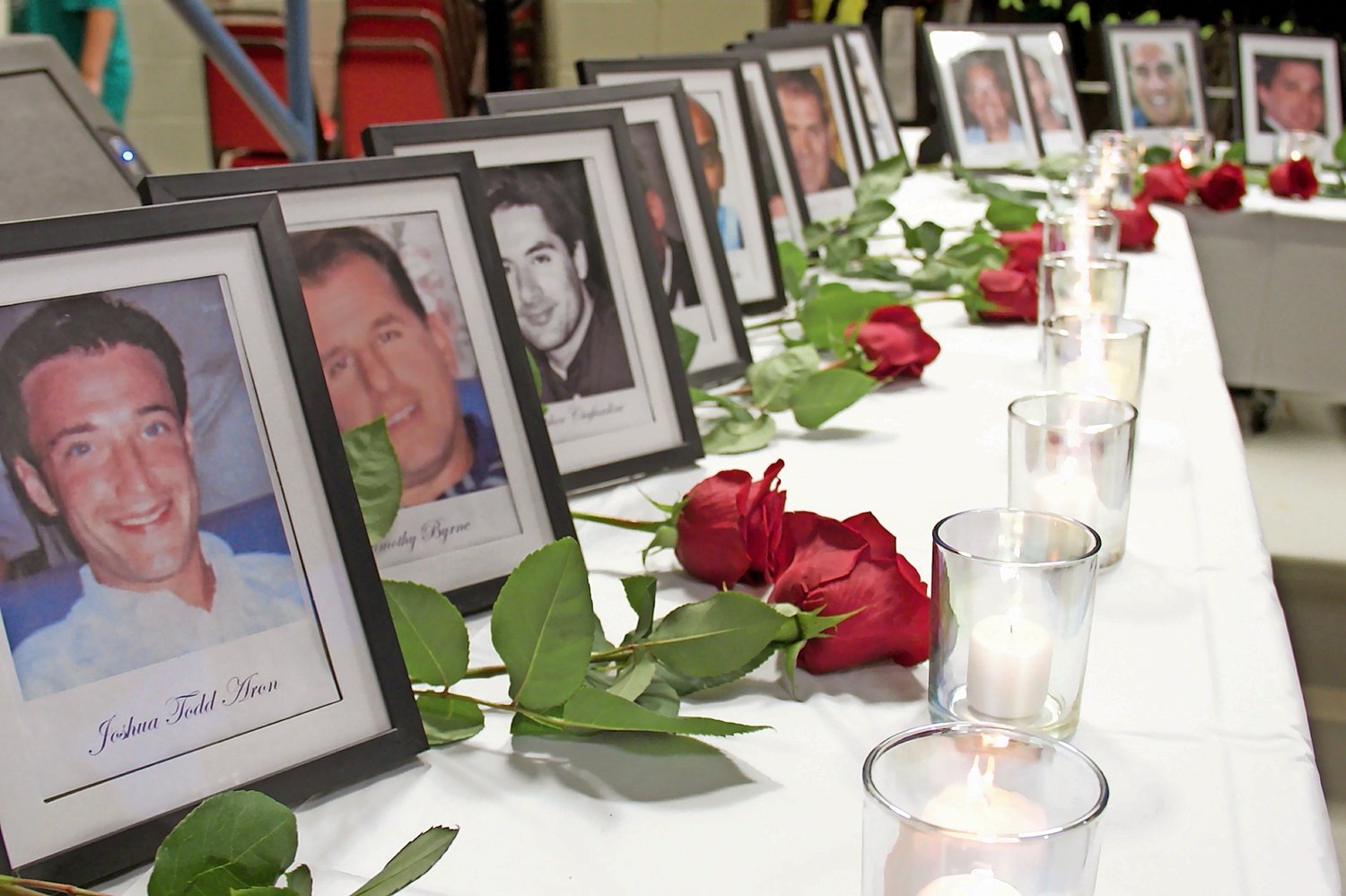 The Sept. 11 ceremony in Oyster Bay was a day to remember those who died when the United States was under attack.
Elisa Dragotto/Herald 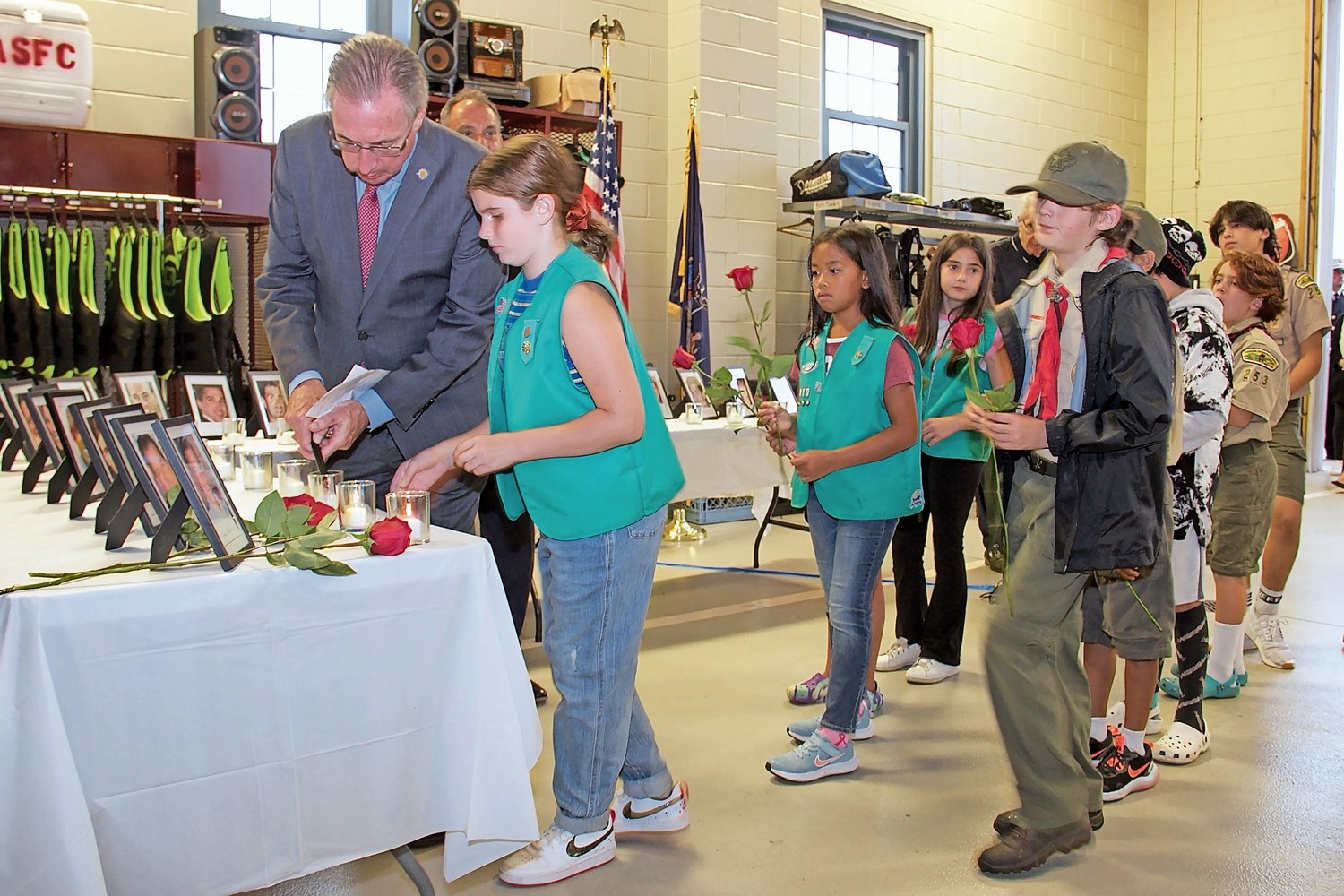 Boy Scouts participated in the 21st anniversary Sept. 11 ceremony in Oyster Bay by laying a rose next to the photographs of the victims, as State Sen. James Gaughran lit a candle.
Elisa Dragotto/Herald
Previous Next
By Laura Lane

Patricia Ruggiere Scavuzzo wiping away a few stay tears smiled as she shared memories of her son Bart J. Ruggiere. A victim of Sept. 11, 2001, he was being remembered with 23 other victims from the hamlet at a memorial ceremony in Theodore Roosevelt Park. It was raining on Sunday, so the ceremony, which is usually held at the nearby memorial on West End Avenue, was moved indoors at Atlantic Steamer Company’s marine facility.

Scavuzzo walked over to a table that displayed framed photographs of all the local victims and grasped the one of her son. When she shared Ruggiere’s photo people sighed and shook their heads, with some commenting that he had been so handsome. At 32 years old, the Oyster Bay resident had only been married a year and a half. He had been proud to work for Cantor Fitzgerald.

The financial services firm’s corporate headquarters were in World Trade Center tower one on the 101 through 105 floors. The firm’s 658 employees that perished on Sept. 11 were above the impact of the American Airlines Flight 11 crash, making it impossible for an escape.

Twenty-one years later, the pain is still raw for families of the victims.
“It’s still hard, but it’s a long time ago now,” said Scavuzzo, as she smiled weakly. “You still cry, but there are all the good memories that you have.”


Part of what has helped Scavuzzo move forward with her life is her dedication to the Oyster Bay Sept. 11 Memorial. She and Linda Slattery, mother of victim Christopher Paul Slattery, water the flowers at the memorial every day during the spring and summer. For them, it’s a labor of love.

State Sen. Jim Gaughran and former State Sen. Carl Marcellino co-hosted the ceremony, the later originating the idea years ago. It was also Marcellino who acquired a state grant to create the memorial on West End Avenue.

“Evil comes from many different directions,” he said. “It’s our goal to remember and never forget. We pray for peace for our country and our world as we remember those who lost their lives that day.”

Girl and Boy Scouts participated in the ceremony by placing a rose next to the photographs of the victims as Gaughran and Supervisor Joseph Saladino lit a candle. Brian Zimmerman, one of Gaughran’s staff members, awakened everyone’s feelings of patriotism with his stirring performance of the “Star Spangled Banner,” as did the Oyster Bay Community Band who expertly played a number of songs including “God Bless America the Beautiful.”

The invocation by Deacon Jesus “Jay” Valdes from St. Dominic Roman Catholic Church and the benediction by Rev. Roger C. Williams from Glen Cove’s First Baptist Church were heartfelt and comforting. And Rabbi Jenn Weinstein, from Congregation Simchat HaLev, while sharing her closing prayer gave attendees hope for the future.

“Let us go forward in their spirit of heroism and all that is still so good in the world,” she said. “May God bless us all. May God show us favor and be gracious to us. May God help us to find ourselves and others hand-in-hand on the path of kindness and peace.”