Renovations to begin at songbirds’ home in Oyster Bay 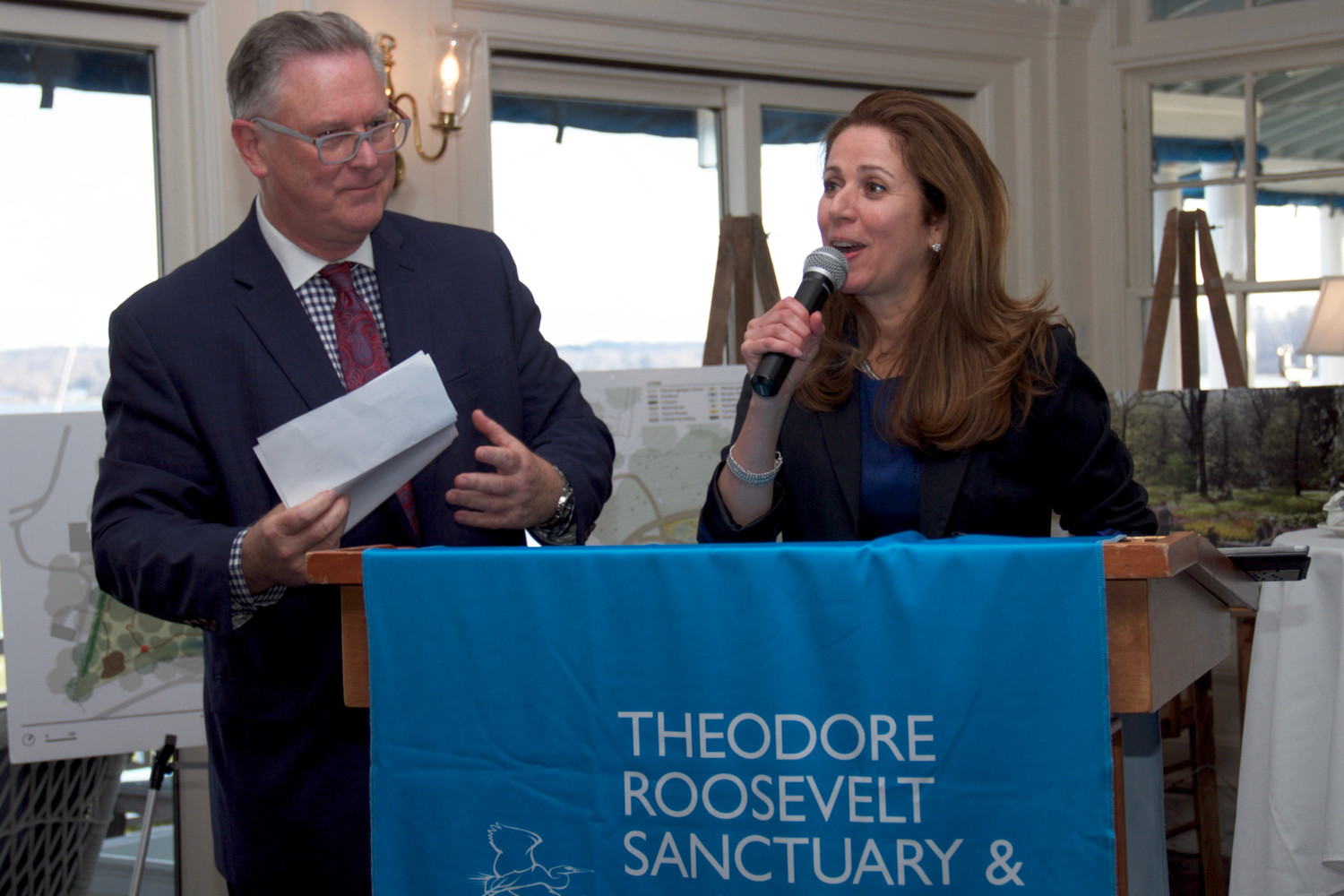 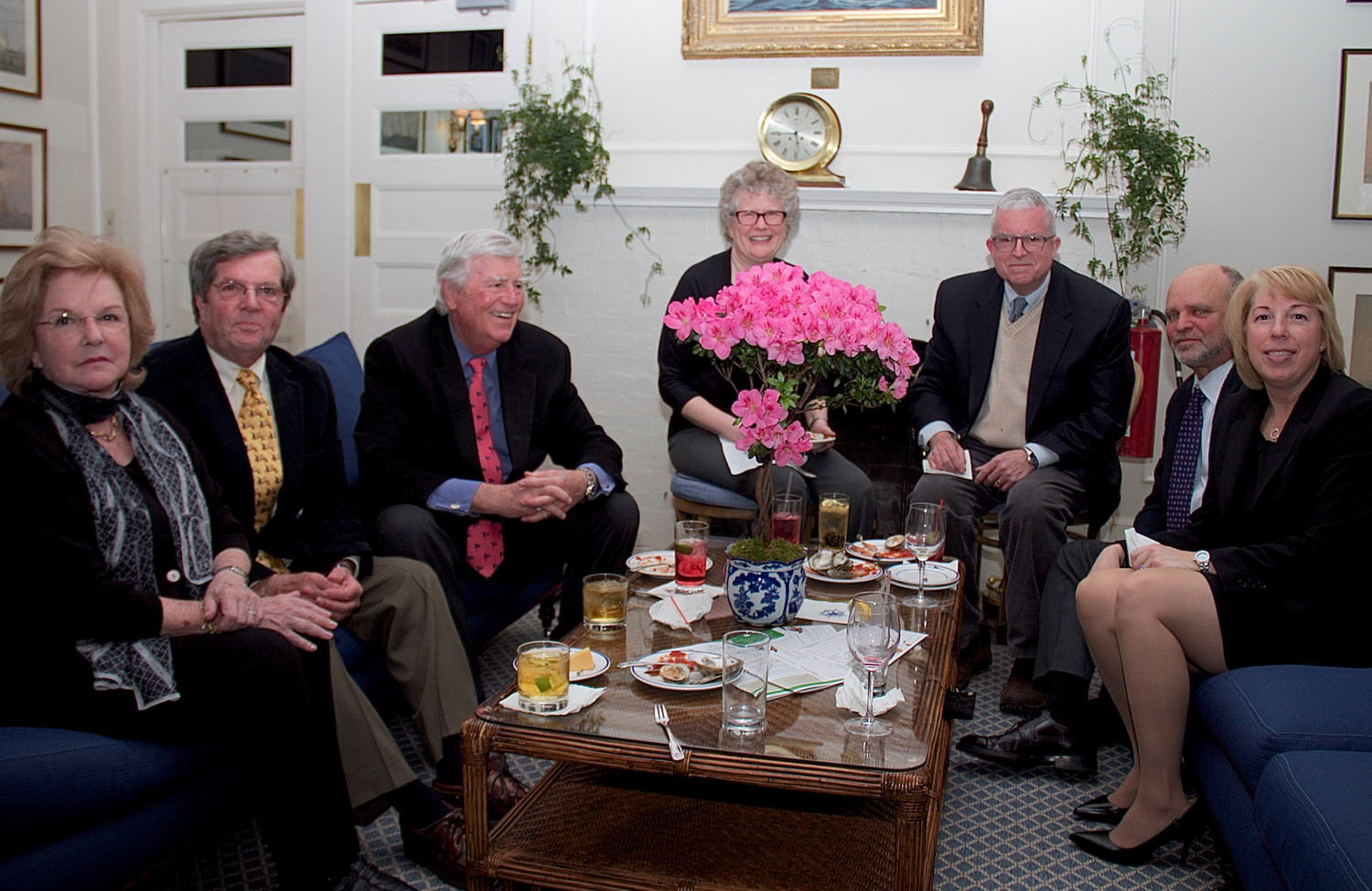 TR Sanctuary and Audubon Center supporters enjoyed refreshments at the fundraiser.
Photo by Elisa Dragotto
Previous Next
By Laura Lane

It’s been all about the birds at the Theodore Roosevelt Sanctuary and Audubon Center for the past 95 years. And popular though it is, this first-of-its-kind home for songbirds is looking tired. Audubon New York refers to what it needs as a “reimagining.”

The center announced plans for a complete renovation last April, which will cost $2.5 million. Securing the funding and necessary permits has been Audubon New York’s commitment ever since.

A fundraiser, in the form of a 95th anniversary cocktail party, was held at Seawanhaka Corinthian Club in Centre Island on April 8, and was packed with supporters.

“The reimagining will be a new look at the sanctuary,” said Willis S. DeLaCour Jr., a co-chair of the benefit. “It will be a fantastic asset for the community, and the new native plantings will be good for the birds.”

Erin Crotty, Audubon New York’s former executive director, said last year that one of the improvements would be “secret gardens around every corner of native plant species,” and shade and butterfly gardens to attract birds, which the organization is predicting will increase in numbers throughout the sanctuary’s 12 acres of woods.

Long Island’s ecosystem is important for migrating birds, Crotty explained, and some are becoming endangered. “The center in Oyster Bay is the cornerstone of Audubon’s work,” she said.

Plantings like the purple coneflower will allow for American goldfinches to catch a quick lunch, and black cherry trees will draw cedar waxwings, which will also enjoy a hearty meal. And the numbers of birds that are already there — red-tailed hawks, egrets and belted kingfishers — will probably increase too.

“This is a serious landscape design,” Kim Mathews of Mathews Nielsen Landscape Architects said at the benefit. “It’s going to be a new place.”

The renovations will be visually appealing, too, especially at the entrance. Right now, a sidewalk close to Cove Road leads to a set of iron gates. The plan is to open up the area, creating a 30-foot by 30-foot plaza at the entrance and a serpentine walkway leading to the fountain.

The statue that sits in the center of the fountain, installed in 1927, was created by the turn-of-the-century artistBessie Potter Vonnoh to honor Roosevelt. The fountain, which has been inoperable for some time, will be restored and made operational once again. There are also plans to include block seating near the fountain for visitors, an area that will also host educational programs.

The current education center will be razed. Ralph Ottaiano, the architect who is helping to manage the project, said that a new education center will have room for programs and additional functions. “The existing building is old and outdated,” he said. The new center, a white building on a different part of the property, where past sanctuary superintendents have lived, will allow for all operations to take place in the same building.

Ottaiano said that ground will be broken on the renovations this summer.

Ana Paula Tavares, Audubon New York’s new executive director, was introduced at the anniversary party. “How special this is to the father of the conservation movement, Theodore Roosevelt,” she said. “We at Audubon are committed to honoring his legacy by hosting and inspiring thousands of visitors a year.”

Audubon is also focused on conservation, climate and water, Tavares said. “The Long Island Sound is designated as a wetland with global significance,” she noted. “What we do here really matters for Oyster Bay, Long Island, the region and our planet.”

Edward Mohlenhoff, a co-chair of the benefit, voiced his support for Tavares, describing her as a “whirlwind” who has already visited all of the Audubon centers, even though she has only been on the job for three months.

Former U.S. Rep. Steve Israel, who lives in Oyster Bay Cove, also attended. Israel spent 16 years in Congress trying to protect the environment, he said, adding that although he is no longer an elected leader, he wasn’t going to give up, and would continue his efforts as a private citizen.

Admitting that he is one of the most fanatical students of Theodore Roosevelt, Israel said he even named his dog Theo.

“The renovations at the

center will be a game- changer,” he said. “Combining the education, history and natural resources components — it will be a plus.”

Harriet Gerard Clark, the executive director of Raynham Hall was also at the benefit. “Whatever helps the hamlet helps Raynham Hall,” she said. “We are all supportive of each other.”