St. Rocco’s is back after two long years 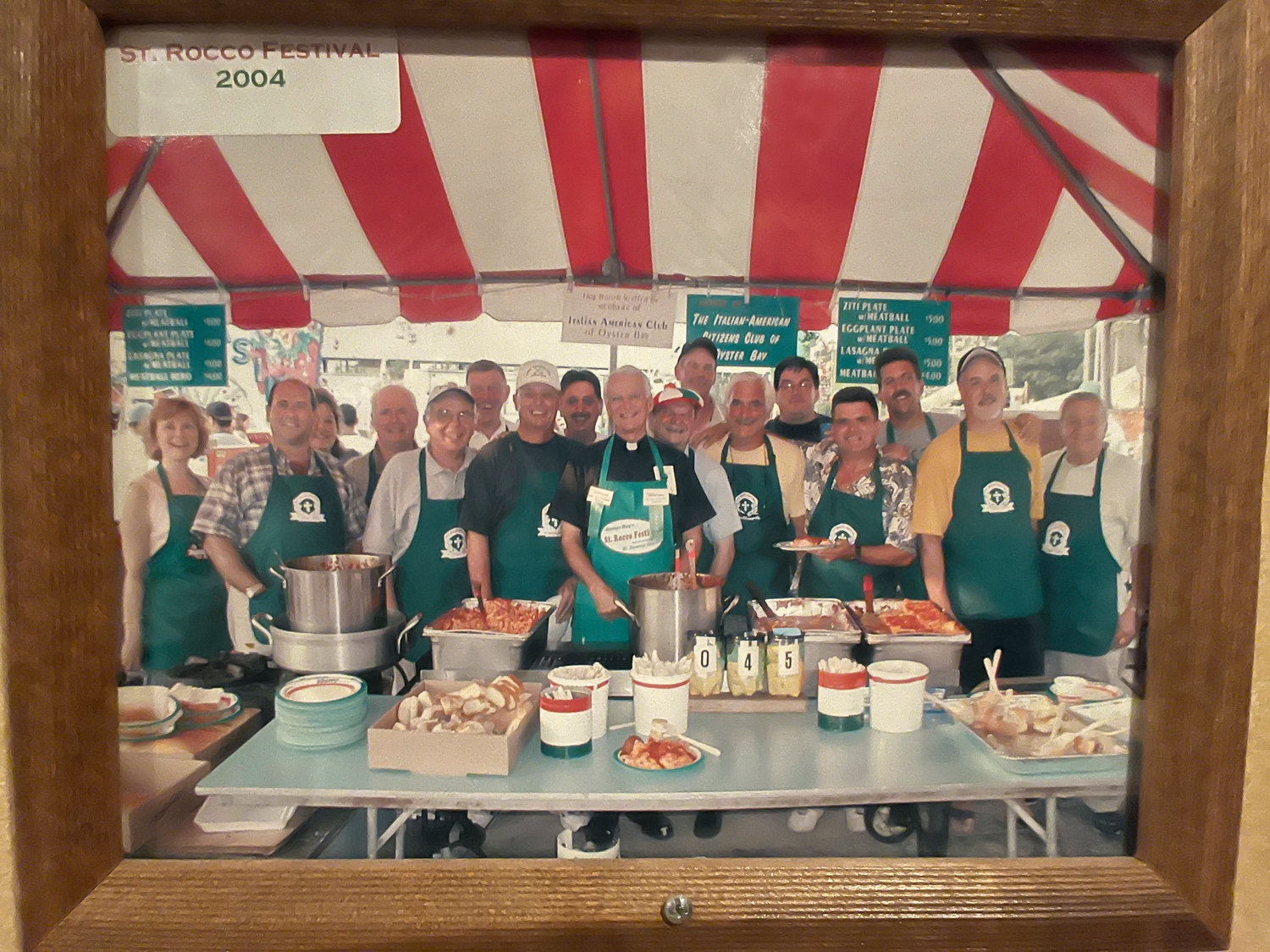 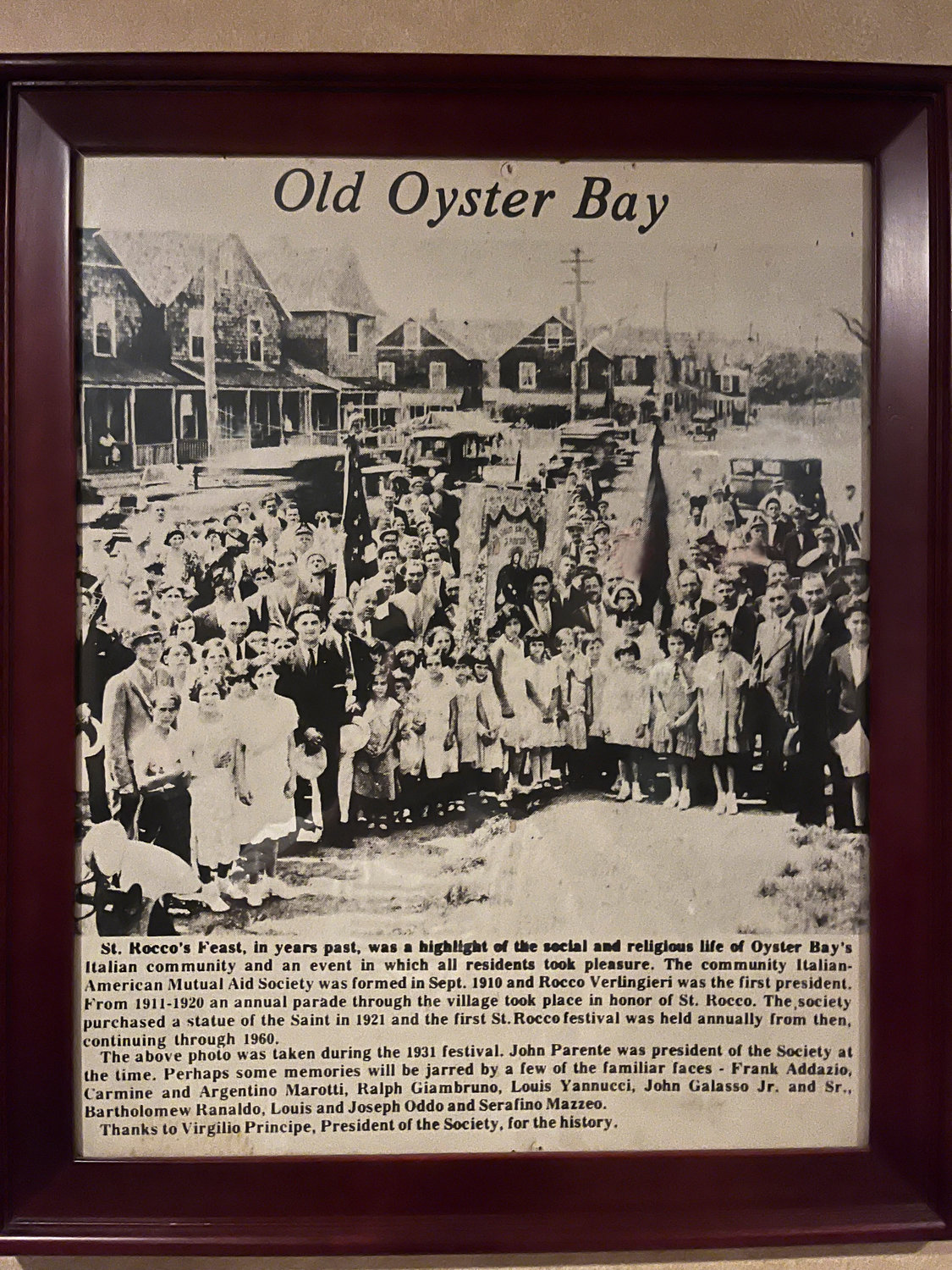 The St. Rocco’s Festival has been held in Oyster Bay for over 100 years. Attendees and organizers gathered in 1931 to mark the event.
Courtesy Italian American Citizens Club
Previous Next
By Will Sheeline

The St. Rocco’s Festival was held once again at Fireman’s Field in Oyster Bay last weekend, following a two-year hiatus necessitated to the coronavirus. This marks the return of a tradition that dates back over 100 years, and one whose history has rarely been told.
St. Rocco’s has been organized and operated for most of those years by the Oyster Bay Italian-American Citizens Club, which was founded in 1906. Four years later, the club teamed up with the local Italian-American Mutual Aid Society, a group dedicated to providing community support for immigrants from Italy who came to Oyster Bay.
When the two groups first worked together to plan a community event in 1910, they chose the Feast of St. Rocco. Although St. Rocco isn’t as well known as other Italian saints, like St. Francis of Assisi or St. Catherine of Siena, there were significant cultural reasons to celebrate his feast.
“To many Italian people, St. Rocco is sort of their patron saint,” former IACC President Barry Ranaldo explained. “A big part of why we hold this event is, we’re trying to keep that Italian heritage alive, and that’s getting harder and harder as generations go on.”
St. Rocco, originally known as St. Roch, was born in Montpellier, in Southern France, to a rich nobleman, but gave up all of his wealth to care for plague victims in Northern Italy in the early 14th century. When he died in 1327, he was venerated as a saint by popular demand of the Italian people.


St. Rocco is the patron saint of bachelors, diseased cattle, falsely accused people and more, as well as several towns and villages across Italy. Hundreds of churches in the United States as well are named after him, including the Church of Saint Rocco in Glen Cove, which holds its own feast for him every year. According to IACC’s current president, Joe Quartuccio, what separates Oyster Bay’s St. Rocco’s celebration from Glen Cove’s and other feasts is a focus on engaging the community, not on using the event as a cash cow.
“Obviously it’s our big fundraiser for the year, but we don’t want to turn it into Glen Cove’s type of St. Rocco’s Feast, where there’s a lot of people from outside the community and you don’t know anybody,” Quartuccio said. “At ours, you see people you know, maybe even people you haven’t seen for a couple of months, so there’s this sense of familiarity, which is nice.”
The IACC ran the festival for roughly six decades, until, in the 1970s, it passed the organizational chores to Saint Dominic’s Church in Oyster Bay. It ran the festival until the late 2000s, when it became too much of an organizational challenge, and in 2010 the IACC took it over once again.
Some of the more “Italian-American”-themed events, like the meatball-making contests, had to be scrapped over the years due to a lack of participation, but there have always been rides, carnival games, and food trucks manned by local vendors.
For the 214-odd members of the IACC and the 85 or so members of its women’s club, giving back to the community has always been a central theme. The club frequently hosts blood drives and various fundraisers, and provides 10 college scholarships to local students from the area.
All of this is a part of the Italian-American tradition of supporting the towns and cities that gave their ancestors so many opportunities when they first settled in the United States.
Some members, like Ranaldo, can trace their family’s membership in the club back to its founding, but for all of them it is an important way to keep a sense of their heritage and tradition alive.
“As a kid growing up in Oyster Bay, attending St. Rocco’s Festival was just a fantastic community event,” Rob Brusca, an attorney and an IACC member, said. “It’s simply a staple of the Oyster Bay community, and it’s great because people have been saying that over and over for the last couple years. It really reinforces the great community feel of Oyster Bay-East Norwich.”
Report an inappropriate comment