The NRA has a long and surprising history 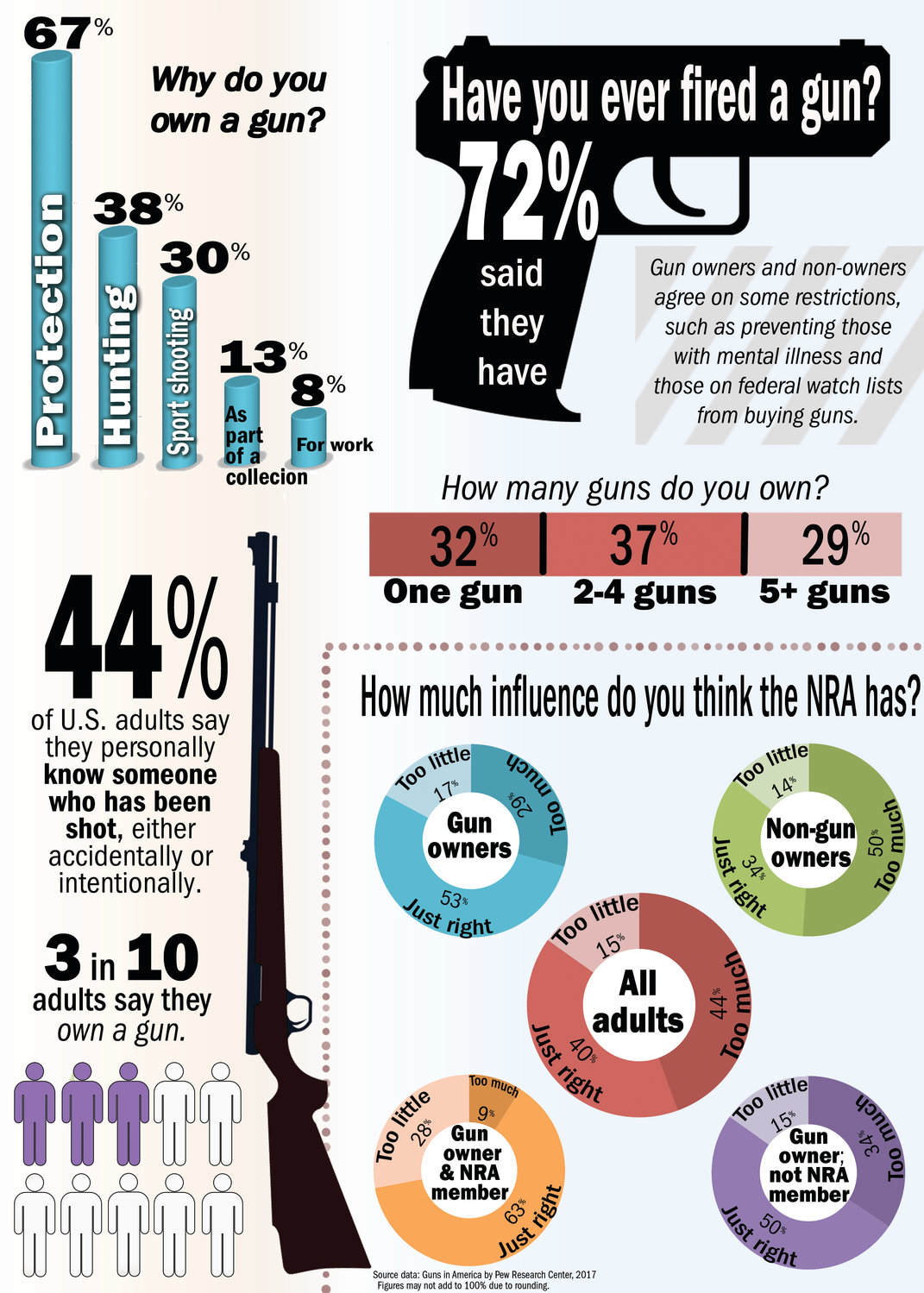 Part seven in a series.

With roughly 5 million members, the National Rifle Association is the largest gun-rights advocacy group in the U.S. Over the past 40 years, it has gained a reputation as a staunch defender of the Second Amendment right to bear arms, advocating even for bump stocks, which turn semi-automatic weapons into automatic ones. The NRA was not, however, always such a vehement gun-rights supporter. There were times in the organization’s past when its positions were more moderate, even centrist.

The NRA might never have come to be if, 157 years ago, Union soldiers had been better marksmen, according to National Public Radio. In the Civil War, 1.2 million Americans died in battle between 1861 and 1865. Afterward, Union Gen. George Wood Wingate, a lawyer, and Col. William Conant Church, a former New York Times reporter, said they believed the war would have ended sooner, with fewer casualties, if more Union soldiers could have shot straight.

In the August 1871 issue of the Army and Navy Journal, Church wrote an article supporting the creation of an organization “to promote and encourage rifle-shooting on a scientific basis.” Although he believed the National Guard should start the group, he worried that would take too long.

Church and Wingate worked together to start the NRA, and on Nov. 17, 1871, it was granted a charter in New York. In its early days, the organization’s mission was not to defend the Second Amendment, but rather to train civilians in the use of firearms in the event that another war were to break out.

In 1872, the New York state and federal governments supported the organization financially, giving the NRA $25,000 — the equivalent today of roughly $440,000 — to open a firing range on a 100-acre plot on Long Island. Called the Creedmoor Rifle Range and located in what is now Queens Village, it opened in 1873. The NRA’s first marksmanship competitions were held there. The U.S. military even gave the NRA surplus guns and agreed to sponsor a shooting contest.

After public opposition, however, the land grant was rescinded, and in 1892, the range was moved to New Jersey.

The NRA and its counterpart, the National Revolver Association, crafted gun regulations that nine states adopted in the 1920s. The regulations required:

Then NRA President Karl Frederick testified during congressional hearings in April and May of 1934, urging lawmakers to consider the legislation. “I have never believed in the general practice of carrying weapons,” he said. “I do not believe in the general promiscuous toting of guns. I think it should be sharply restricted and only under licenses.”

The National Firearms Act was passed on June 26, 1934. It required that machine guns, sawed-off shotguns and silencers be strictly regulated and heavily taxed. Felons were not allowed to own weapons, and gun sellers and owners had to register with the federal government. The NRA supported the act.

The assassinations of the Rev. Dr. Martin Luther King Jr. and Sen. Robert F. Kennedy led to the Gun Control Act of 1968, which the NRA supported in large part. The act included minimum age and serial number registration requirements. People with mental illnesses or drug addictions were no longer allowed to own guns. The NRA, however, blocked one key provision that would have created a national registry of all guns and required all gun owners to obtain licenses.

Political shift in the NRA

For many years, the NRA’s main focus was on hunter education, marksmanship and activities such as sport shooting. Since its beginnings, the NRA has encouraged the formation of rifle clubs at colleges, and according to the NRA website, today more than a million young people take part in its shooting competitions through organizations like 4-H, the American Legion and Boy Scouts.

From the beginning, the NRA has supported the right to keep guns at home for protection.

In 1977, the organization’s leaders wanted to close their Washington, D.C., office and move to Colorado Springs to escape the political tumult of the nation’s capital. But at an NRA membership meeting on May 21, 1977, in Ohio — which later became known as the “Revolt at Cincinnati” — the group’s more moderate leaders were ousted, and the course of the NRA radically changed, according to NPR.

Many of the roughly 30,000 delegates in attendance complained that the NRA’s leadership had gone soft on gun issues, which led to a takeover by hardliners. Unlike the old leaders, the new ones favored a strict interpretation of the Second Amendment and the expansion of gun rights. Led by a new executive vice president, Harlon Bronson Carter, from 1977 to 1985, the NRA’s membership tripled.

Wayne LaPierre, the organization’s current executive vice president and CEO, has led the organization since 1991. He is an outspoken defender of the Second Amendment, and a critic of gun-control policies.

Kenny Warren, 66, a past president of East Norwich’s Mill River Gun Club, has been an NRA member for 15 years. He owns rifles and shotguns, and has a state pistol license. A skeet shooter and hunter, he can often be found at a rifle range shooting targets.

“They help us,” Warren said of the NRA. “There are a lot of anti-gun people out there trying to take our guns away. They don’t realize the sporting purposes of guns.”

Warren added that the NRA should support some regulation of guns. “Bad people get guns because of the loopholes, like at gun shows,” he said. “Down South, it’s very easy to get a weapon, and it’s easy to transport them up here. We need some regulations to stop that, [like more thorough] background checks.”

Bob Pemberton, 89, from Glen Cove, worked for the NRA for 19 years as a field representative. He is a former Marine and a retired Nassau County police officer and. “The NRA is the only civil rights organization in the world that supports the lawful purchase, possession, ownership and use of a firearm,” he said. “An awful lot of NRA members don’t own a gun. They see ownership as a civil rights issue.”

Not everyone who supports the NRA is a member. “I see it as a protector of the Second Amendment in the face of legislators that would seek to abolish the amendment,” said attorney John Napolitano, 60, of East Norwich. “The only way to stop a bad guy with a gun is a good guy with a gun, because police cannot be all places at all times.”

Gun restrictions do not work, Napolitano maintained. Describing himself as a “constitutionalist,” he said, “I’m not a gun owner, because I never felt the need to own one.”